“That way players can help make this game better by providing feedback, and get instant updates via Steam client, which is super convenient.”

“Beta - all systems are in place, not a lot of bugs, it is playable and core mechanics and interactions are there.
All weapons are implemented, plenty of different enemies, weapon mods, items.”

“Full release will be priced higher.”

“I listen to feedback and ideas from players and interpret it carefully, and then improve my game! And then I do it again.

“It’s a simple but subtle game, and each playthrough has delivered a new insight into its world and the odd things that operate within it.”
Rock Paper Shotgun

Foes different not only in visual design but also in their behavior. For example there is an enemy that will teleport every time you hit it, or enemy that leaves bombs that home on you, but you can shoot those bombs to use them against it.

Usable items and power ups, like friendly sentry, an eye that lets you transmute items, kite that lets you fly, matchbox that ignites all foes around you, and much more! 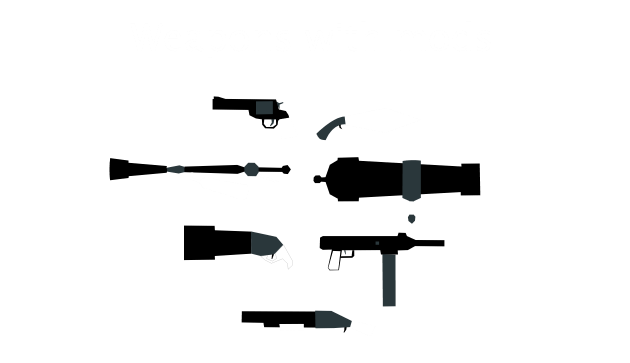 Each weapon is different from another, and every weapon can be modded with options that provide interesting game experiences like "walk backwards to get ammo", "12 hits with no misses give you money", "last two bullets in a magazine do double damage", "don't spend ammo while in the air", "shoot lightning bolts with shotgun".