“Dethroned! is still under development and somewhat rough around the edges here and there. However, we continue to improve the game on a regular basis with new features, content updates and bug fixes. You can help us! Play the game and tell us what you think! We will be making frequent balance and gameplay updates based on community feedback and suggestions.

Currently we have the core gameplay with a variety of heroes done. Other big features coming next (not necessarily in this order) are new heroes, new maps, a lightweight quest system and cosmetic add-ons for heroes (think hats!). In addition we will be polishing the game itself, creating new items and generally balancing things for a better game experience.

You can play Dethroned! right away for free. We also offer a special Early Access pack for a limited time that unlocks all current heroes plus all the paid future content, including all the heroes that we will ever add!”
Read more

This content requires the base game Uninitialized on Steam in order to play. 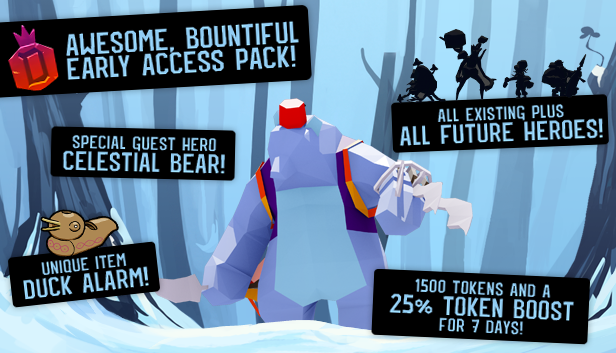 In the final game new heroes are unlockable both with ingame currency and cold, hard cash starting from around $2. But now you can get all existing and all uncountable future heroes by buying this pack (includes also all other paid content)!

In addition you also support Dethroned! during the critical early steps the game is now taking, thanks for that!

This deal exists only during the Early Access of Dethroned! and after that it is gone forever.

Dethroned! has MOBA elements mixed with RTS and tower defense genres. The player controls a hero character, builds defenses, trains troops and engages the opponent in quick intense matches. Between matches the player acquires and equips new items and builds combinations of them.