Bot Colony
Developer
North Side
Publisher
North Side
Bot Colony is the only game controlled by speaking or typing. You command robots to move and manipulate objects. The right questions unlock videos of the events they witnessed. No dialogue trees - the game unfolds 100% based on what you say, taking interactivity and immersion to a new level.
All Reviews:
Mixed (48) - 58% of the 48 user reviews for this game are positive.
Release Date:
Developer:
North Side
Publisher:
North Side
Tags
Popular user-defined tags for this product:
Voice Control Robots Adventure Indie Artificial Intelligence Investigation Detective Casual Early Access Simulation Strategy RPG Sci-fi Puzzle Funny Episodic Experimental Immersive Text-Based Spelling
+
Reviews
All Reviews:
Mixed (58% of 48) All Time

“In Bot Colony you actually get to EXPERIENCE verbal interactions with machines (robots). Keep in mind that such conversations were just a sci-fi fantasy in movies like Her, Ex Machina, iRobot, Blade Runner and 2001 A Space Odyssey. Our emergent conversation-based gameplay requires major experimentation and tuning before release.”

“Bot Colony will stay in Early Access until we consider our robots have achieved satisfactory understanding and until we release Riot (2018). Building a truly genre-defining game is a daunting task: intelligent assistants like Siri, Alexa or Watson don't yet match the multi-step dialogue capability of Jimmy (the domestic robot in Intruder). And we still have a long way to go!”

“Landfall, made up of the Intruder and Arrival episodes, is a self-contained game offering 6 - 10 hours of gameplay with lots of replay value - as you can have different conversations and try new things. We've added an Investigation mission in February 2017 (up to 3 hours to complete) and Achievements. In December 2017 we've added support for checkpoints to enable you to explore different paths through the game.

Work is underway on the Riot episode that will feature a genre-defining Humanity Test.”

“Intruder and Arrival are fully playable. A new Investigation mission was added in February 2017, and Achievements in mid-2017. Checkpoints added in December 2016 contribute to the robustness of the game.”

“We plan to gradually raise the price as we ship new content and features. Existing customers are upgraded for free.”

“We prioritize our features based on community feedback. To give a few examples
”

“Asking Jimmy questions was also a very smooth experience, as he would elaborate who lives in the house, who did what at certain times, and even show you video footage if you ask him the correct questions. It was incredibly fun playing detective and trying to piece together what happened.”
DarkStation

“It’s not exactly Blade Runner‘s Voight Kampff test, but few, if any, games, offer this level of unscripted interaction. The game’s use of voice synthesis, which makes sense in this context, means that all the robots are fully voiced. Their pronunciation isn’t always dead on, though I still grinned like an idiot when I was able to get Jimmy to address me as Bruce Wayne. I spent a good hour picking through Jimmy’s recollections and even though we weren’t discussing anything deep, it was curiously satisfying. In its current state, Bot Colony definitely has promise, provided that the game’s developers build on the quality of ‘Intruder’.”
GameSpew

“If the idea of talking to robots and telling them what to do sounds interesting to you, there is no other game that can offer you that.”
GameSkinny

It’s August 2021 and you're recruited by Nakagawa Corp., Japan's leading robot manufacturer. Agrihan, Nakagawa’s private island in the South Pacific was infiltrated. The robots are acting strangely. Agrihan ( Bot Colony) is a Mars testbed staffed mostly by robots - so you'll need to talk to THEM to investigate what happened.
Bot Colony ( www.botcolony.com) is unique in that it's currently the ONLY game on the planet relying on AI-based conversation as the main game mechanic. You speak in English with robots (or type) in order to advance in the game. Bot Colony will appeal to players interested in genre-defining games with novel mechanics. If you enjoy figuring out how to get through to robots, command them through actions and investigate - you'll enjoy Bot Colony. The game is played in an eerie South Pacitic setting where modern architecture and robots contrast with the jungle environment. It integrates adventure, simulation, RPG and puzzles into a unique language-based gameplay with a great atmospheric soundtrack. 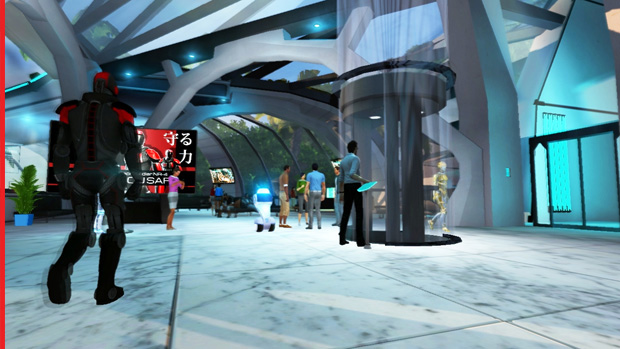 You'll get to experience Artificial Intelligence that is currently in the realm of cinematic fantasy in Her, Ex Machina, iRobot, Blade Runner, 2001 A Space Odyssey. It's a challenging and entertaining experience that will make you realize how literally machines process language, and how much we take for granted when we speak with people.