Puss in Combat Boots
Developer
Primula
Publisher
pencil
Cats + Armies + the Apocalypse! In a world ruled by bushy-tailed, bipedal catfolk, "humans" are mythical beings worshipped as gods. Those who pass a human's trial will have their wish granted... This is the tale of the girl who met a god.
All Reviews:
No user reviews
Release Date:
Developer:
Primula
Publisher:
pencil
Tags
Popular user-defined tags for this product:
Adventure Dating Sim Otome Romance Female Protagonist Choose Your Own Adventure Anime Singleplayer
+
Reviews
All Reviews:
No user reviews

Puss in Combat Boots is an isekai romance visual novel.

As you progress through the story, you will be asked to make choices at key points that will lead you to different endings.
Take on the role of Tama (renameable), the princess of Nyamato, and work to overcome the trial foisted upon you as you uncover the secrets buried deep in the lost ruins of society. Along the way, you'll pursue the love interest of your choice and strive for a happy ending!

As the story develops further, you will encounter special timed choices with up to four arrows pointing in different directions. Quickly, make your move using the mouse or arrow keys!

In a world ruled by bushy-tailed, bipedal catfolk, "humans" are mythical beings worshipped as gods. Those who pass a human's trial will have their wish granted... or so the legends say.

In the bountiful nation of Nyamato, nature has reclaimed the ancient ruins that lay scattered around. With Princess Tama soon to be wed to her cousin Kotarou, the two announce their union to the gods as part of a traditional marriage ritual.

But at that exact moment, in a flash of blinding light, a young man appears--with no visible ears or tail, precisely as humans are described in the old legends. And just a few days after his advent, an Impurrial ship docks at the harbor. With both nations eager to lay claim to the human for their own purposes, the once-peaceful Nyamato is confronted with an arduous trial to overcome.

Be it for her country or her heart, what will Tama choose?

The protagonist's home country, littered with strange overgrown ruins of unknown origin. The catfolk here spend their days as they see fit, mostly hunting and crafting.

In this distant western nation, the citizens live in a central hub with lavish, ornate buildings nestled close together. Outside that small region, however, you'll find a desolate wasteland. Desertification has gotten worse in recent years, and water is worth its weight in gold.

Catfolk legends speak of divine beings known as humans. Similar in appearance to catfolk minus the ears and tail, humans are said to grant the wishes of those who can pass their trials. 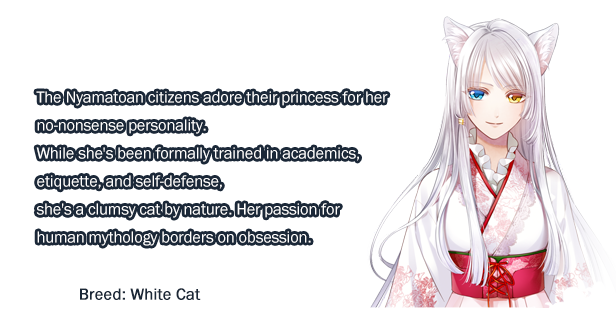 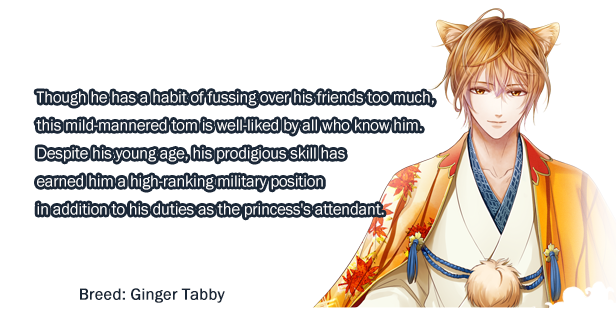 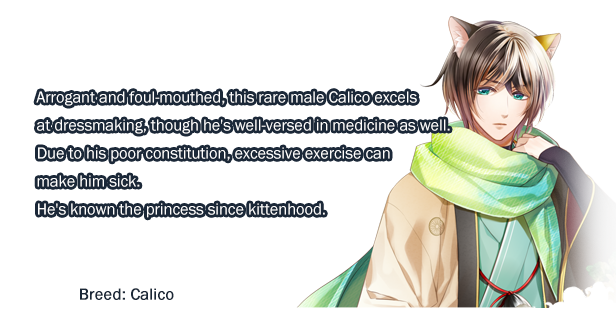 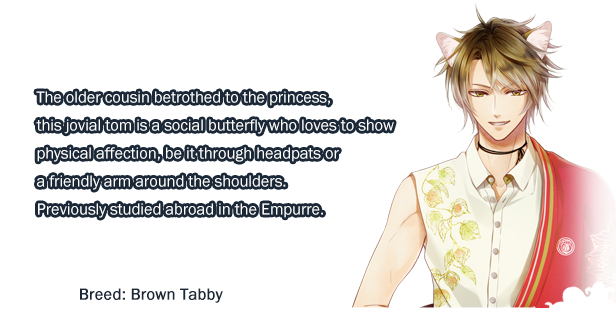 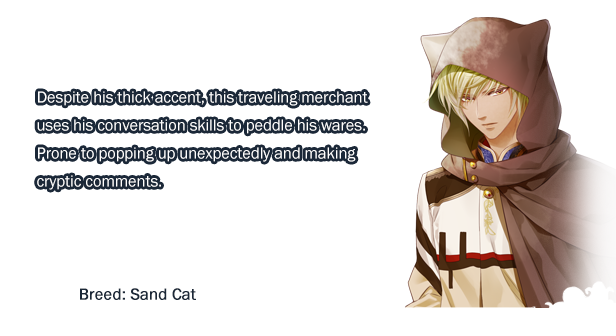 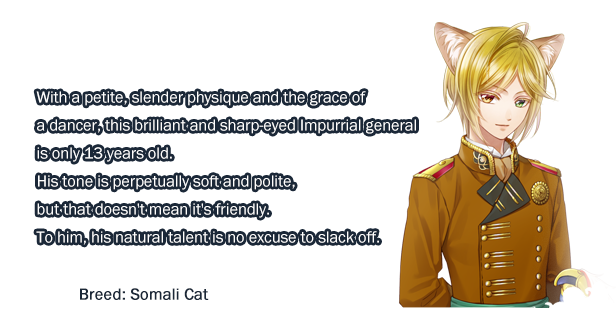 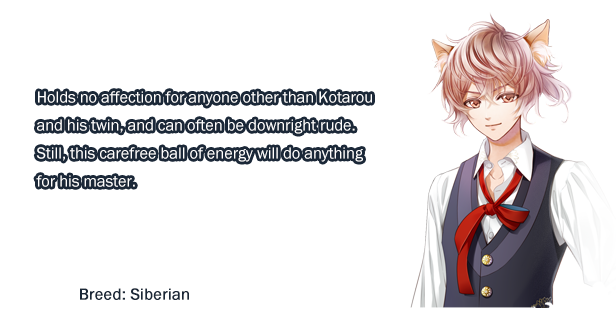 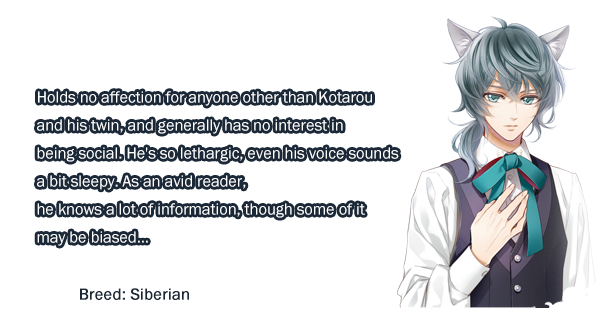 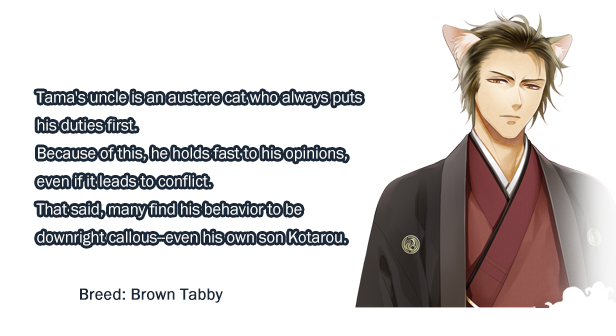 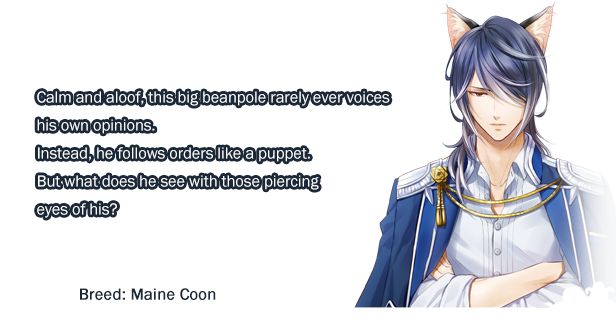 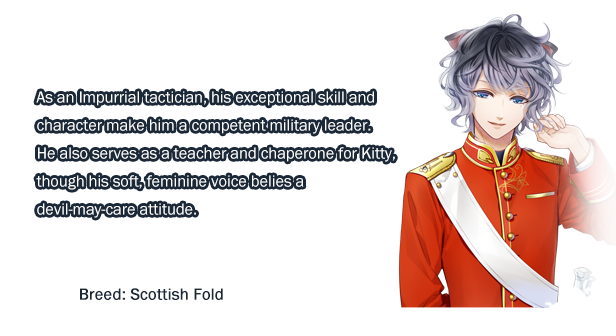 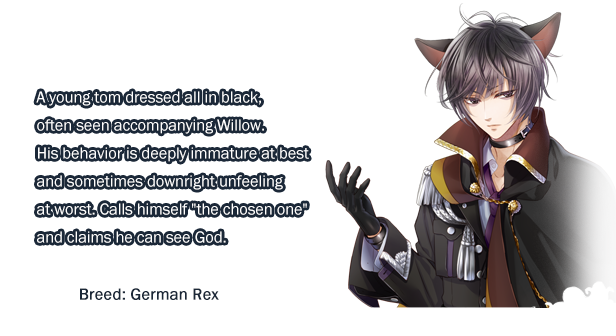 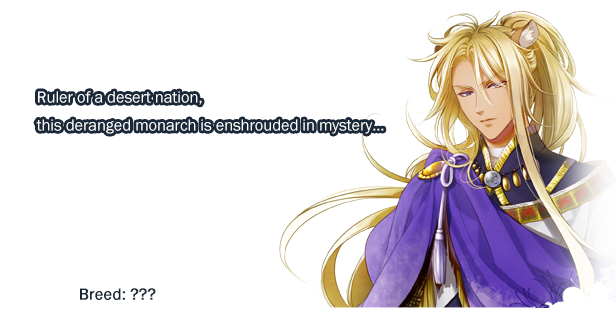 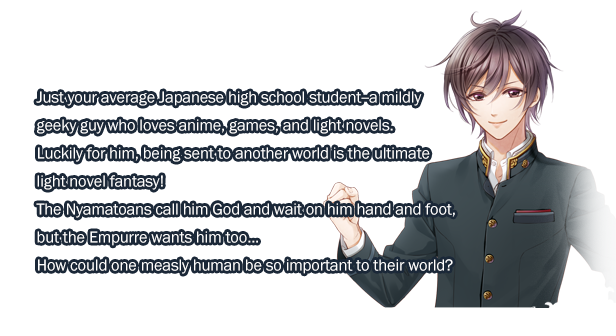