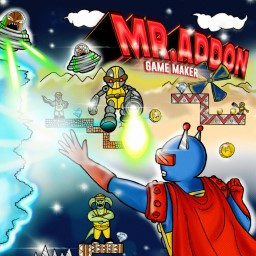 Haven't had enough of Mr.Addon in Sulpicius Gallus M? Well now, in this fantastic second part, you will be able to create your own levels! Create your own adventure in Mr.Addon Game Maker!

You will see a lot of new things and it will be a lot of fun! Fight or create your own levels, worlds and more! Replace the world of Mr.Addon with your own, as if you had developed it yourself and effortlessly!

Regarding the gameplay, MrAddon is an incredible 2D platform game, whose mechanics consist of eliminating all the enemies in each level. Being able to play in an "Arcade" mode or in the "Creation of new levels" mode. The game cannot be saved and continues are limited. In Mr.Addon Game Maker the difficulty is decided by you when you create new levels. To eliminate all the enemies, it is achieved by throwing multi-frequency "rainbow" rays at them, which is the special ability of the MrAddon character, thus turning them into "Moons", "Snow" or "Fire" type balls and then rolling them to eliminate more enemies. An adventure created by fans of the legendary Snow Bros Arcade game and the fantastic Mario Maker.