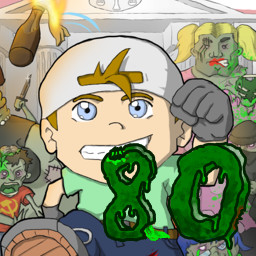 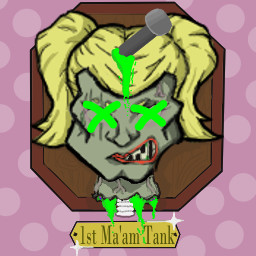 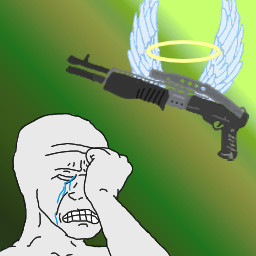 Congrats kid, you were acquitted. Time to go home. But guess who's waiting for you just outside the court? An even bigger & angrier mob than the first one that tried to kill you. Good luck.

Acquitted is a satirical fast-paced zombie shooter / hack-and-slash with elements of base building and turret defense that takes place on randomly generated and fully destructible maps. Fight for your life against decades of bad parenting & education that has physically manifested into a skateboard-swinging, feces-flinging horde of undead rage!

Choose from up to 18 different weapons and items to defend yourself against the hundreds of braindead hellbent on either putting you in a grave or a prison cell for refusing.

The controls are simple (WASD + mouse twin-stick shooter) and the game takes less than a minute to learn, but the difficulty and strategic complexity increase over time. But what kind of strategies are festering inside the brains of the braindead?

Small zombies will swarm you with a variety of hand weapons while others stand back and throw bricks and bottles. They will work together from different directions to surround you, use their sheer numbers and mass to trap you, flank your position, determine complex paths and even smash barricades to reach you. Besides inflicting damage with melee weapons and projectiles, they can also blind you with foul substances, control your movement by covering the map with molotov flames, steal your weapons and send you flying back with jump kicks. Gameplay gets very interesting and chaotic when several of these enemy strategies are combined at once.

Big zombies are few in number but incredibly powerful and dangerous. Some can grab you and eat you in a single bite, while others can bulldoze their way through walls to ruin your cover and open the floodgates to more threats. Often they act as large meat shields for smaller zombies advancing behind them. Thankfully they are too big to fit through small openings, which gives you lots of escape options (especially by placing barricades) - but don't expect them to stand near doorways letting you shoot them. They will try to find a bigger opening or, failing that, hide behind cover or circle your hiding spot menacingly as the smaller zombies ooze inside the building to flush you out. Big zombies also leave their bodies behind as obstacles, either blocking your path or maybe providing valuable cover.

How long will you last against the braindead hordes?