“Beyond the core gameplay, the game mechanics and features will be developed in a modular fashion. Combined with Early Access, this approach means we can get the game into your hands earlier and update it more often.”

“The aim during Early Access is to release approximately one feature every two months, leading to a full release in winter 2022-23.”

“The full version will have 3 additional features, on top of the 3 that will be in the game at the Early Access launch. This will bring the total number of features in the full version to 6.

Along with this, there will be balancing improvements and bug fixes.

We also hope to translate the game into a number of other languages, though it has not been decided which ones currently, and is subject to how successful the game is in Early Access.

See the About section of the store page for a more detailed roadmap.”

“The core gameplay of Critias Empire, along with the majority of the art, UI and music/sound have all already been completed. It is currently going through internal QA and is being balanced and tested as an ongoing task.”

“The price will increase when the game goes from Early Access to Full Launch.”

“We will use the Steam beta branch feature along side our community discord server and our own tools, such as our in-game bug report button to allow our players to give us feedback, help with finding bugs and assist with balancing the game.”

Critias Empire is a turn based strategy game that mixes elements of 4x and city builder genres. As the leader of Atlantis, build your empire whilst surviving disasters rained down by the ancient Gods.

The core gameplay of Critias Empire, along with the majority of the art, UI and music/sound have all already been completed. The game will be balanced during spring 2022, as well as having three more features added before testing and Early Access release in summer 2022.

Beyond the core gameplay, the game mechanics and features will be developed in a modular fashion. The aim during Early Access is to release approximately one feature every two months, leading to a full release in winter 2022-23. This approach means we can get the game into your hands earlier, and will also make balancing the game easier. 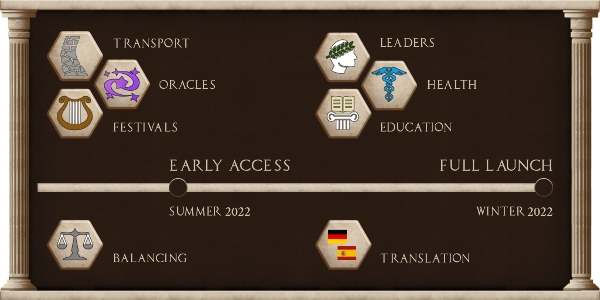 Transport - Bind your empire together and allow it to flourish by connecting far flung lands and distant cities. Unlocks the ability to build a network of roads and sea routes, which in turn boosts production of nearby tiles.

Oracle - Call upon the mystics and soothsayers of your empire to divine the true intentions of the Gods. Unlocks the ability to preview the effects of an upcoming disaster within a limited area, and with a variable amount of uncertainty.

Festivals - Appease the Gods and delight your citizens with extravagent celebrations. Unlocks the ability to throw festivals, which give time-limited boosts to your empire, at varying costs.

Leaders - The Kings of Atlantis, as decendants of Poseidon himself, are for better or worse, the undisputed rulers of Atlantis. Grants you leader characters, who give your empire various bonuses and penalties, depending on how you raise and educate them, and handle the important moments in their lives.

Education - Knowledge is power. Unlocks the ability to train specialist workers, such as farmers and miners, to boost productivity of certain land uses.

Health - Place the wellness of your citizens at the heart of a healthy thriving empire. Unlocks health modifiers and building chains, as well as introducing contagious disease.

If the game is financially successful, we also hope to translate the game into a number of languages during Early Access, though exactly which ones are still to be decided.

After full launch, we hope to continue adding features to the game, including genre fan favourites like tech trees and trade. This however, depends on the success of the game justifying its further expansion. Below you can see an outline of some of these possible features. 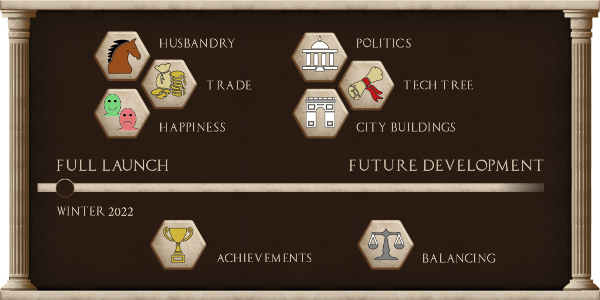 It's also worth noting that none of the features in our roadmap are guaranteed. We won't release a feature if it isn't fun or somehow breaks the game. The order in which we develop and release the features may also change. That said, we are fully committed to having at least 3 features by the time of Early Access launch, and a further 3 by the time of the full launch.

There are a myriad of ways we'd like to expand the game, but in making the roadmap, there are many cool features we have left out for the time being. This is either due to their large scope being beyond the capabilities of our small development team, or because they don't fit with the core gameplay.

As well, for the same reasons, some common features of 4x and strategy games in general won't be coming to Critias Empire. Below are some of the features we've decided not to pursue for now:

Multiple Gods
- We would love to implement multiple Gods, each with their own unique disasters. Afterall, the Greek Gods were a whole pantheion of personalities. However it would be impractical to implement, for both technical and scope reasons.

Different Disasters
- Fires, volcanoes, lightning bolts thrown from the very hand of Zeus - Different types of disaster, each with its own set of challenges and rewards are a natural fit for extending Critias Empire. However due to very specific technical reasons around how terrain is generated in Critias Empire, it is sadly not possible to implement.

AI Competitors
- It was decided right from the start of development that other competing civilisations or nations would massively increase the scope of the game. Far beyond what our small team can hope to make. To put it another way, cutting them has also cut out whole parts of the traditional strategy genre, such as units, combat and diplomacy. This has allowed us to focus on making the challenge of surviving and adapting to the disasters and ever-changing map from an intriguing idea into what we feel is an exciting game in its own right.

Exploration
- In place of AI Competitors putting external pressure on the player, Critias Empire instead has it's deity-driven disasters, and a relatively small map. Unfortunately, in this context, typical 4x style exploration does not make sense, and trying to re-invent exploration is a mammoth, risky task best left for another game entirely.

Factions
- Perhaps the ancient Atlanteans were in fact cultural brethren of the Persians, Carthaginians or Celts? It would be cool to play as different factions based on ancient Mediterranean cultures, each with thier own unique stats, bonuses and buildings. However, it would also massively increase the scope of the game, especially in terms of art, beyond what our team can implement.

Story-Arc
- The legend of Atlantis, as originally orated by Critias and written down by Plato, is only partially complete. The rest of the story has been lost in the mists of time. Filling it back in with a grand story arc for the main game, or campign made of multiple missions is unfortunately a vast undertaking in technical and narrative writing terms, and sadly not something we can reasonably do, given our limited resources.