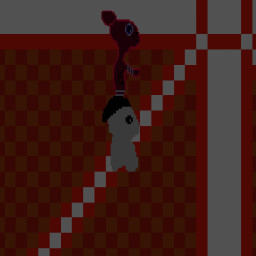 Vaxomon is an horror psychological based on pokemon mystery dungeon: explorers of darkness and have many fixed dungeons during gameplay
Key Features:
Generated fixed dungeons
Exploration in a dark ambient
partner follow the protagonist
walking horror simulator
controls:
arrow keys or wasd to move Mroonoma
Story:
A legendary vaxomon Tisavil, where the villagers of Clareeville fear him and have horrible legends about him, lives in the heart of a closed forest, which is close to this village. In this forest, all kinds of vaxomon live and Tisavil has a duty to protect the forest, but everything changes when a child gets lost in the forest while following a Beautifly. When he approached the child to scare him, he was hugged by the child, feeling something (probably love). So, he felt threatened and went back to his place, but found Team Aether, hunters who are looking for rare vaxomons, but Tisavil stopped their action. Before fleeing, they decided to blow up the cages with the vaxomon, he saved all but one that was out of reach, and then something jumps out of the bush, saving the boubee from hitting the trees, but passed out when it hit the trees. It was the same child he had found earlier, he donated a stone from his body which was absorbed by the young man, recognizing her bravery and then took it out of the forest with a bed of leaves. The parents find Tisavil and her child, concluding that the vaxomon would do something wrong, but it ran into the forest, since the parents kept the child in the house until he turned 10 years old. That's where your journey begins.