KaraCreate
Developer
LOGARI_games
Publisher
LOGARI_games
The world that runs the steam engine. By adsorbing the soul, it turns out that "Karakuri"becomes a life. Researcher Gennai invented the soul and pork driver, and by blending the collected souls with the registrant's soul, he succeeds in creating a "Karakuri" that is attached to the registrant.
All Reviews:
2 user reviews - Need more user reviews to generate a score
Release Date:
Developer:
LOGARI_games
Publisher:
LOGARI_games
Tags
Popular user-defined tags for this product:
RPG Adventure Voxel JRPG Creature Collector Crafting Character Customization Indie Singleplayer
+
Reviews
All Reviews:
2 user reviews () All Time

After the invention of the power of the steam engine, the world where the steam engine was operated by the energy of the electric engine.
As a result of research, it is found that Kikai becomes a life by adsorbing the soul to Elekiter. Many Kikai were made, but Kikai went out of control.
Researcher Hiraga Gennai invented the Hun and Po driver. He succeeds in creating a registrant's soul by blending the collected soul with the registrant's soul through a driver.
Generally, when technology has penetrated and many machines and systems have been set up, the story about Kikai begins ...

You are a young man who wants to study abroad. With my grandfather's soul driver in my hand, I will travel and collect karakuri.

This game is a Japanese-style role-playing game with maps created in voxels.
You can craft, train, and battle your character.

Let's craft Karakuri using the collected materials.
Each Karakuri has its own individuality and has various abilities.
Fight against rivals and suspicious organizations and grow your own Karakuri steadily!

The other party is not only the master who manipulates Karakuri, but also the stray Karakuri.
Depending on the battle, special rules may be enforced. 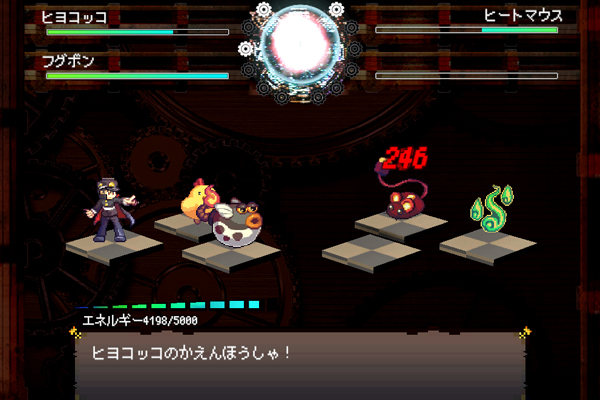