“Dungeon Defenders Going Rogue is a new take on the traditional Dungeon Defenders gameplay. There's a lot of experimentation and additional work that we're doing to make this a complete experience. We're wanting to get in more heroes, more levels, more enemies, more bosses. What's here is our starting foundation that we want to build upon more, and Early Access allows us to not only do those things, but receive player feedback and mold the game as we continue to develop it.”

“A very smooth experience with a solid core. It's what we'd consider roughly 80-90% done, with the remaining things being added as polish or more content. Early Access comes with over 20 maps, 4 heroes, 3 boss fights, 100+ items, talent systems, and more (check out our About Section for more info).”

“We plan to make a small price adjustment once we leave Early Access due to planned additional content and development.”

“As we continue to develop the game, we will be surveying for player feedback. We also have a community discord setup for automated feedback and bug submissions that has work with thousands of users already.”
Read more
Check out the entire Chromatic Games franchise on Steam

Combining Roguelite and Hero Defense gameplay into a crazy free-for-all, where it’s you and up to three friends versus hordes of enemies. Select your hero, use your towers and abilities to survive the waves of foes, unlock new weapons and runes, and take on the bosses that await you!

Action RPG combat allows you to get into the fray or take down enemies from afar. As you collect powerful runes and weapons your build changes, turning you into a war machine that gains insane strength! 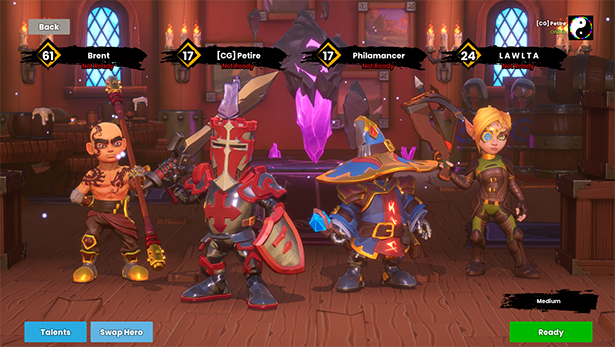 Are you brave enough to dive in as a rogue Defender? Perhaps you like to be in a brave party to support one another? Never fear, you can choose to play solo or with friends in up to 4-Player Online Co-Op!

Active tower building allows you to instantly summon towers that help fight and take down the armies that approach. As you progress you’ll find new towers with stronger effects to help bolster their power!

Heroes, Weapons, Runes, and Talents are unlocked as you progress, providing greater power, more diversity within your build, and a whole new experience every time you embark on an adventure.