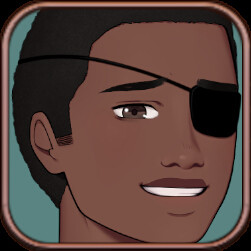 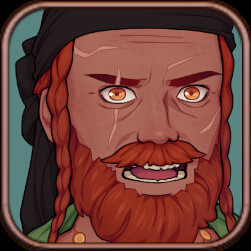 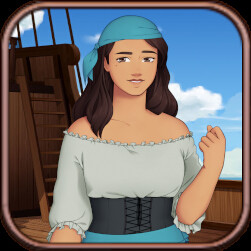 “I finished Lark’s route feeling not only entertained and head over heels for the witty lutist, but also like I had learned something. It’s a story that will make you think, as it tackles complex moral issues and grants the player a rare glimpse at life in a different time in history.”
Sweet & Spicy

Set in early 17th century, just before the Pirate Golden Age, The Spanish Privateer places you in the shoes of Isabel Carlota de Castilla (but you can just call her Carlota). Carlota is an 18-year-old runaway escaping a marriage forced upon her by her parents. Not able to afford passage on a ship, Carlota offers to work for her voyage aboard Captain Rico's ship, La Aguja. Captain Rico is a privateer, a pirate with a letter of marque allowing him to attack and capture the enemies of Spain. Carlota soon falls in love with the sea, and challenges herself to become a valuable member of the ship.

Amidst sword fights, balls, and drunken nights at the tavern, Carlota learns more about her fellow crew members and the world outside Spain. Visits to the archipelago of Azores, cities in the Caribbean and Veracruz, New Spain, teach Carlota about the effects of colonization and make her question her contribution and power aboard the Spanish ship.

No matter which route you travel down, Carlota must overcome her male crew members' prejudices, earning their respect with her hard work, determination, and intelligence.

Isabel Carlota de Castilla ran from her life of luxury and high-society to escape a forced marriage. Will life on the sea be the freedom and refuge she desires, or will she learn the truth the hard way?

Half Scottish, half Spanish, and entirely charming. Lark is a hired bard whose job is to entertain the men—and he takes liberty to entertain the women, as well. His specialty is playing the lute.

Flint is the ship’s quartermaster and protector. Fiercely loyal to the captain, Flint is equally distrustful of women. His specialty is gunnery.

Hailing from Puerto Rico, Captain Rico is no stranger to the sea. His kind and forgiving persona hides the past which granted him his scar. His specialty is swordfighting.