It's late at night in your 80’s bedroom, and a weird energy fills the air, making your “G64” computer flicker oddly. Brushing it off, you roll up a character sheet for the tabletop roleplaying games on your shelf. Before you finish, dark portals appear on your desk and little pixel creatures cross over into our world! Defend your character through the stages of each campaign book - whether it’s all in your head or not!

A Unique Gameplay Hybrid: CrossOver takes some classic concepts from traditionally “casual” genres (Match 3 and Tower Defence) and crosses them into a new and eccentric hardcore challenge with Strategy, RPG and Puzzle elements. Co-op is uniquely asynchronous, with one player controlling the dice and the other handling the attacks.

A Deep Challenge: The main campaigns include shops to buy armor and items, RPG progression (earn XP, level up, increase stats), dozens of spells and weapons to find, and mercenaries to hire. Random encounters appear between stages with Fighting Fantasy book style choices. Earn persistent gems to unlock more classes/races (15 of each in the game) or trade in for extra gold during any campaign. Try your hand at the Solo and Co-Op Endless Modes to challenge the Online Leaderboards! 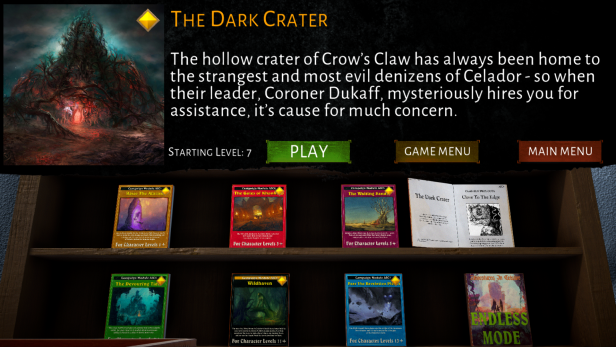 A Wealth Of Content: The overall game is made up of multiple Game Modules in various genres (Fantasy, Sci-fi, WWII, Modern Warfare, Cthulian, etc), the first two of which will be included in the core game and others will become available later as DLC expansion modules. Each Game Module has 7 Campaign Books (each with several Stages to complete), a procedurally generated Endless Mode with Online Leaderboard, several Co-op Challenges and a Co-op Endless Mode. A beautiful art gallery is unlocked for each campaign, and there is even a full hidden game with its own Online Leaderboard.