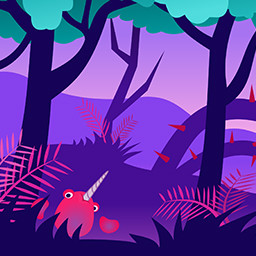 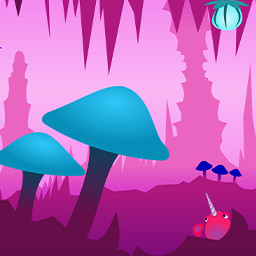 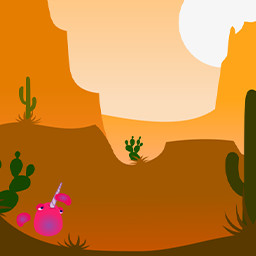 DISCLAIMER: THIS IS A STUDENT GAME, PLAYERS ARE BOUND TO ENCOUNTER SOME BUGS AND ISSUES DURING GAMEPLAY.

In the Monster Wilds, there is a hierarchy. The largest, most powerful monsters rule the largest swaths of territory, leaving less powerful monsters to the Wild Woods and surrounding areas. Where does that leave Doppels? Hiding, praying they’ll be able to eat and live. The player is one such doppel, a rare color among other blue doppels; one of those parasites who subsists off of monster carcasses and monsters big enough not to notice the stab of their horn.

One day, the pink Doppel notices that if they stab right into the spinal cord under the monster cranium, they see flashes of the monster’s anatomy, and gain more than an understanding of their abilities; the player gains the ability itself. Others of its species simply survive; the player starts to realize that this constraint on their species could evaporate if Doppel were to teach them.

The Doppel ventures forth, taking down small prey and learning abilities that will aid the whole of the Doppel species. When he returns, other doppels herald him a pioneer of another way of life—a hero. With the rising number of monsters that Doppel conquers, he begins to realize that he can combine abilities of monsters of similar level to become stronger. With each ability harvested, the doppel species becomes less and less afraid of the Wilds, and more lustful for adventure, with the pink Doppel at the helm of their expeditions. Doppel only wants to go farther; if it can only take on bigger monsters, it could become more powerful. And with power, comes respect. No longer will the player or their species be bottom-feeding parasites. They are ready to thrive.

Play as Doppel, and battle your way through the Monster Wilds to become the ultimate Monster!