“Since it is being made by one developer and partial collaborators, it is expected that it will take some time to create routes, vehicles, scenarios, etc. and implement features.
I believe that we can improve the quality and efficiency of the project by finalizing the specifications and extending them based on your feedback.”

“I plan to implement functions and improve the quality between Tatehama and Hamazono for 6 to 12 months.
After that, I plan to gradually extend the route to Oji with functional enhancements over several more years.”

“I am planning to add weather changes, conductor mode, trains, etc.
After the addition of the conductor mode, the route will be gradually extended from Hamazono to Oji to eventually allow a total of 44.1 km of operation.
*The morning rush scenario will be created after the line is extended to Daidoji. (Because express trains pass through Hamazono Station.)”

*The route between Hamazono and Oji is currently incomplete.
*Conductor mode is not yet implemented.”

“Price increases are planned as progress is made, including route extensions.”

“You can send us feedback by clicking the Feedback button in the main menu of the game.
or send a reply to the author on Twitter.”

■ Train operation
Train operation is performed by tilting the handle called a master controller back and forth.
Push it toward you to accelerate, and push it back to brake. Basically, you can proceed with the game only with this movement.
In addition, you can perform various operations such as horns, buzzer to contact the conductor, and switching viewpoints.
You can also check your driving rating after driving. 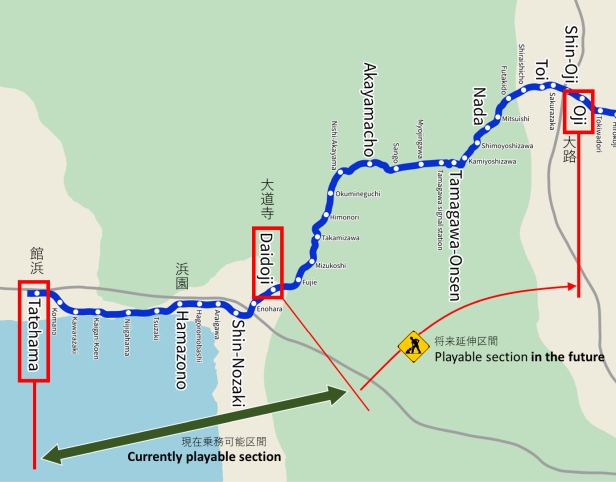 ■ About Tatehama Electric Railway
The Tatehama Electric Railway main line connects Otebashi Station to Tatehama Station. At present, the line can operate up and down 9.6 km of this line from Hamazono Station to Tatehama Station.
The train departs from Hamazono Station, and after passing Tsusaki Station, it goes through a tunnel and runs along the sea until it reaches Kaigan Koen Station. After passing Komano Station, the train goes underground and reaches the terminus at Tatehama.