“Bringing Valthirian Arc 2 to Early Access allows our small team to bring our vision for a sequel directly to the community. The sequel we have in mind is bigger in every way from first title and we want to develop the game alongside the community that had supported us through the years.

Valthirian Arc 2 also represents an evolution in the series and we have some cool new ideas and directional changes that we would like to explore alongside our players. We that the brave heroes who choose to take on this quest with us will give us the feedback and lessons we need to make this sequel the best Valthirian Arc title to date.

The version of Valthirian Arc 2 that you will play in during the Early Access period represents a small, but ever-expanding slice of our full vision. Features and stories will be added as we go along, and we will do our best to keep the biggest bugs away with each update.

Taking part in the Early Access launch gives you a chance to interface with our team and affect change to the game through community feedback. If you’re up to the challenge, we’d love to have you along for the ride – if not, we’ll excited to welcome you back into the world Valthiria at launch.”

“We are currently planning a 12-month schedule for our Early Access development, with larger scale updates every 8 weeks and a number of smaller updates scattered in between. That said, no development plan survives contact with community feedback, and our ultimate goal is to launch a sequel that is worth of the Valthirian Arc name and the community we’ve gathered around it.”

“Our Early Access build will gradually add on the full breadth of features (characters, champions, personalities, mini-games, dungeons, factions, etc...) gradually over the next year. At launch, we will have the full playable content that includes the opening act of the story, a few dungeons, characters, and the new combat direction we are refining for this sequel. By the end of the year and prior to our 1.0 release, we plan on having nearly 80% of the game’s content complete with a few surprises reserved for launch day.”

“We will have at least 10 hours of playable content. It will include the opening act of the story, a few dungeons, characters, and the new combat system. You can also send your champions to multitudes of quest that will challenge your strategy.”

“The game will be discounted on Early Access and we will increase it to the intended price on release.”

“Community feedback is core to our process at Agate, and we have always been amazed at the insights and feedback we’ve received from community members. Your honest feedback, pointed questions, and passion give meaningful context to our internal discussions and continually push us to great bigger and better games.

We plan to follow every keep update with a survey, and we invite all players and Valthirian Arc fans to join us in our community channels for an open dialogue with the team.” 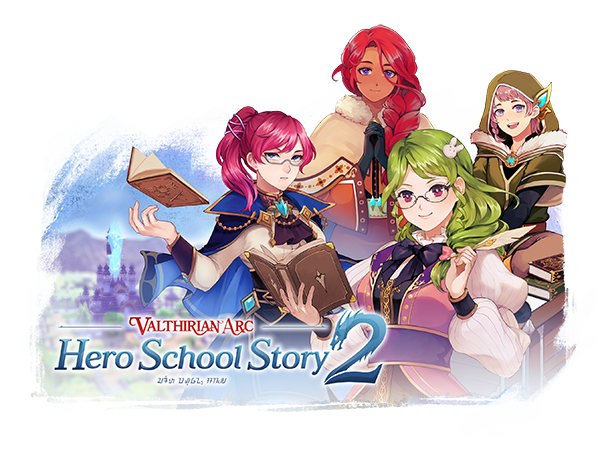 Valthiria’s mightiest heroes are not born of destiny or prophecy. They were enrolled, trained and taught in special academies. Hero School Story 2 places you in charge of a hero academy to create the next generation of heroes who will save Valthiria from the dark forces that threaten it. Take command of the faculty, nurture a unique and ever-changing roster of students, forge alliances with the kingdoms who vie for influence and earn your place among the most prestigious Hero Schools in Valthiria.

Combining the RPG and Simulation genres, in Hero School Story 2 you will manage your students by determining their learning schedules and courses, building their stats and skills to shape them into the heroes you desire. These stats are key when sending your students to fulfill quests from people all over Valthiria, defeating various enemies in strategic turn-based combat and adding to your academy’s renown. Yet there’s no time to rest on laurels – every school year the seniors will graduate and freshmen will enroll, so managing your academy to fit the dynamic roster of students is crucial.