“This game is fully playable and contains several hours of gameplay.

I'm releasing this game in Early Access because I would like to develop this game with the community, in order to create a better overall game experience, to test new ideas and strategies, and add more content along the way.”

“The final game will contain more heroes, more cards, monsters, and locations. Each hero has a different journey on the world map. The gameplay will be more refined and the game will be better balanced based on the feedback of the community.”

“Decks & Daggers is fully playable. The current version contains 2 heroes (The Barbarian and the Witch). Both of them have 20 cards in their arsenal. You can travel to different locations on the world map, enter the dungeons to fight monsters, and collect gold. With the gold, you can go to the tavern to unlock new cards. Your cards can be managed in the deck builder, where you can try out different card combinations so you are better prepared for your next quest.”

“The pricing will be different for the final release. The product will be priced lower during the Early Access phase. You are helping with the development of this game for which I'm very grateful.”

“Community involvement and feedback will be vital to the development process of Decks & Daggers. I will mainly engage with the community on the Steam forums and on Twitter.
I'll listen to their feedback and prioritize new features, changes, or issues accordingly.”

Welcome to Decks and Daggers! A Deck-Building RPG Card Game where you choose a hero and venture deep down into the dungeons to slay monsters and collect treasure.

Every hero has a unique set of cards. The Barbarian relies on brute force to defeat enemies. The Witch has a wide variety of curses and tricks at her disposal. While the Wizard has an assortment of spells that can be combined to devastating effect. 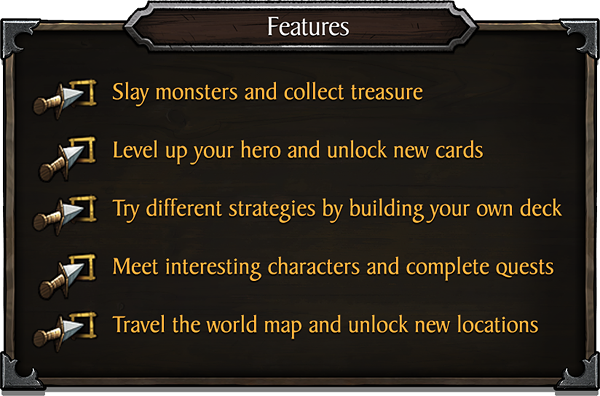 After every quest, you'll have the option to visit the tavern. At the tavern, you can buy new cards from a shady merchant (no in-app purchases). Optimizing your deck greatly increases the chances you'll survive in the dungeons.