Alpha One is a top-down action, 4X-lite strategy game. You control a lone space capsule to gather and control resources in another galaxy!

Stranded in deep space as a result of an accident, you are pitted against an unknown opponent in a galactic struggle for resources and your only way home!

In Alpha One you will:

ONE SHIP, ONE MOVE

In Alpha One you are only One ship, with each turn do you:

Classic Newtonian physics with real space-feel. This is not your Dad’s X-Wing that somehow obeys the laws of aerodynamics in space. No. If you thrust in a direction you have to apply counter force in the opposite direction to come to a stop. This might take some getting used to since you’ve probably been spoiled by all that gravity at your feet.

Compete for resources in dogfights with hostile ships. A quick escape may be your best bet! No need to "git gud" if you outsmart your opponent and bring the right tool for the job!

Attack your opponent’s outposts and main base to hinder their expansion and reduce their overall strength. Or just eliminate them, after all, they want you dead.

Remember that not needing to "git gud" bit? Well, utilize this shield to make your life easier! 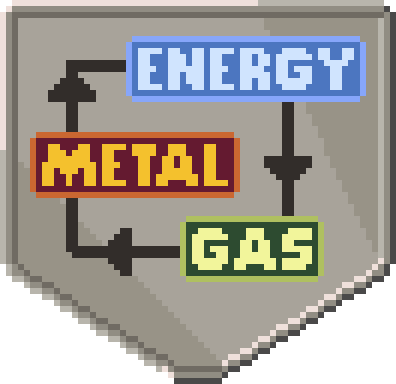 The story, all names, characters, and incidents portrayed in this production are fictitious. No identification with actual persons (living or deceased), places, buildings, and products is intended or should be inferred. No person or entity associated with this game received payment or anything of value, or entered into any agreement.. No animals were harmed in the making of this game.