Isle of the Crown

“Since this game is heavy on strategy and because you never know what will need to change, Early Access seemed the best fit; not only to change through buffs and debuffs, but with the versatility and ease of being able to add even more, it feels best to have the community also help in taking it into a direction that makes for the best long-lasting experience.”

“The game itself isn't quite large, so at MOST, a year- though that is being extremely generous and is fed by my wanting to make it the best it can be. But at the very least, it depends. If the game is able to help me focus more on game development, then I can work on it more and become a full-time developer. Though, since this is one of my first games, and since I am a solo developer, and due to the current epidemic, the time-frame is a little difficult to pin-point. If I had to take a guess, the very least would be 5-6 months.”

“Since the game itself is versatile enough to add more abilities and mechanics, it's easy to put in even more to the point that day-1 of the FULL release will have far more content than day-1 of the Early Access release. Not to mention that with help and input from fans, it will be tailored even more towards future customers of the Full Release.

More Maps
- More and more maps will be added over time, even after Early Access.

Map Editor
- Eventually, players will be able to make and share their own maps with an in-depth editor. This is currently on the backburner as it will be added much later, but like any future feature, it can be pushed to the front of the list if requested enough.

More Cards
- As a reference, the current set of usable cards is only a fraction of how many will/can be added into the game. As progress is made in this game's development, more cards will allow different strategies and tactics to counter older/newer cards.
- Like all features, these can change. And since this feature deals with player interaction, the cards will be affected by player input, so be sure to share your thoughts -both good and bad- so that the cards can be made to be as fair/viable as possible.

New Modes
- Currently, up to 4 players in the Basic Vs mode is available, but there are two planned modes for the future.
- Timed: This mode is where players have only a set amount of time to make their moves; similar to the timers in Chess. This mode is built for players that have a good sense of which cards do what, and a few strategies.
- Expert: This mode is the one I am the most excited for personally, as it brings the game closer to an RTS, which is a genre that influenced this game. This mode will have a much higher skill expectation, as the cards will have individual timers and all players will be moving and taking their turns at the same time; faster-paced and a dependency on player skill.

Online
- This is perhaps the last thing that will be added since it takes a lot of time to implement, and because I am unfamiliar with things such as Netcode and actual online interactivity coding.
- But! I REALLY WANT THIS REALLY BADLY! So I will look into applying this to the game as I work on other features, but for the meantime, I have access to Steam's "Remote Play" to help this idea along; "Remote Play" allowing players to play with any friends on Steam, so as long as one of them owns the game.”

“Player Count:
- Currently, this game allows up to 4 players with access to Steam's "Remote Play"; a feature of Steam that allows anyone that owns the game to invite a friend on Steam to play with them as if they were sitting next to them. Local games have the biggest benefit to this feature, which my game happens to be at the moment.

Cards:
- Currently, the card count is a good number; enough to have both variety and a mix of strategy for all players to interact.

Modes:
- Only 1 mode is available, the Basic mode. In this mode, players take turns to move their pieces before passing it to the next player; the usual for a boardgame-type.”

“Although I am confident in the game, the fact that it is local-only is a bit of an issue, so it will be lower-priced for now. When I do incorporate online play and/or special features like AI, then the price may rise steadily as more content is added and more features are implemented.”

“A very simple answer. High Community input. I want people to play this game like chess, where you can just start it up and enjoy yourself. With input from players and the community, I can cater and mold it to be as enjoyable as possible. I will do this through various methods as well; be it through:

Buy Isle of the Crown

From a simple home to a mighty kingdom; explore, expand, exploit, and exterminate your opponent in this strategic pixel-art chess-like hex game using cards as your pieces and their abilities as your tools. As the saying goes; easy to learn, hard to master.

As the game progresses in development, the price will rise; online being the major update that will more than likely double the game's price.

But until then, the game will be at its lower price-point, with possibly a middle ground between online and the first build; the price only changing when a significant amount of new features and cards have been added, or if sales take off. If I start selling more though, I'll certainly add far more and do far more than I had initially planned for the beginning- particularly because if that happens, then I can focus completely on game development. And since this is an industry I love, I would happily focus on it.

But of course, these price changes and updates will all be announced and broadcasted for everyone to plan ahead to share with friends and whatnot.

What is Steam's "Remote Play Together"? 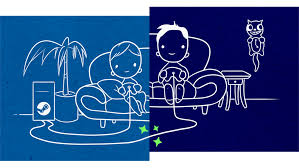 Instantly share your Steam local multi-player games with friends over the internet, for free. Using Remote Play Together, one player owns and runs the game, then up to four players — or even more with fast connections — can quickly join in the fun.

Music Credits: [All found on OpenGameArt[dot]Org]