Rodent and Plank is a run 'n gun shooter that borrows heavily from genre classics such as Gunstar Heroes, Earthworm Jim, and Metal Slug. You play as the titular Rodent, a small rat that gains incredible power when he unwittingly comes into contact with a sentient piece of cosmic driftwood. Not long after this chance meeting Rodent finds himself up against the mysterious Knights of the Round. Who are they? And what could they possibly want with Plank?

Players can choose from one of four starting weapon types. Each weapon type can be combined with any other in order to create a massive arsenal of incredibly deadly weapons. If that's not enough to satisfy your urge for destruction, you can also take advantage of grenades and 3 levels of FP attacks.

Each level takes on a life of its own: one minute you're platforming, and the next you're piloting a submarine while being chased by a laser wielding shark. 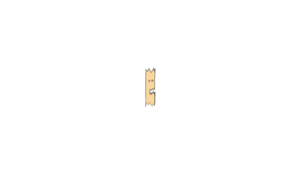 All of the art in the game is drawn by hand which gives it a storybook quality (despite the fact that there’s exploding teddy bears everywhere.)

Rodent and Plank’s music has a unique flair to it that we lovingly refer to as "techno-organic"; it's like Dave Wise had a baby with EDM.

Rodent and Plank is a difficult game, but like the games we've drawn inspiration from it's been finely tuned and balanced for maximum replayability. That said, wanted to make sure than anyone can enjoy the game so we added the ability to completely customize the difficulty.