Take on the role of skilled hunter, Sam, in Faeland, an adventure RPG set in a beautiful world inspired by 8-bit classics.

Traverse through the expansive world of Faeland, making your way through forests, caves, dungeons and castles. As you unlock new abilities, revisit old haunts to explore previously inaccessible areas hiding deep secrets. Along the way, you will create enemies and make friends. You will be equipped with a full arsenal of weapons, but choose carefully as your choice will impact your combat speed and strengths.

Humans have established their kingdom through centuries of peace efforts while maintaining a safe boundary, away from the dark forces of magic and monstrous beasts that lurk just beyond civilization. Sam, a young hunter, lives in a secluded cottage deep in the forest. When Sam’s home is raided by a horde of trolls and orcs, he is forced to escape with little, but his life. As Sam’s journey to a new home begins, unbeknownst to him, a larger threat looms in the background, and the entire realm’s survival will rest upon him becoming the hero he was born to be. 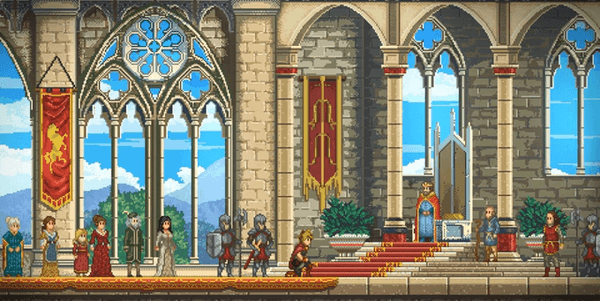 In Faeland as the player, you can freely explore the open world, traveling from one town to another, talk to friendly NPCs, learn about the game’s lore and get useful tips, commerce valuable items to improve your economics, buy new equipment and consumables and take on quests to acquire useful loot while progressing in the main story. Some of the areas you need to traverse are challenging forests, caves, dungeons, castles and more. You also have to acquire new abilities and special items to gain access to previously inaccessible areas and paths. The combat style is customized through your equipped weapons, choose from knives, daggers, swords, axes, spears and bows, all with different attack animations, speeds, strengths and effects.