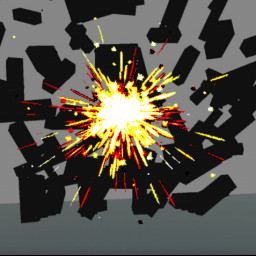 “The game is going to get way better. I want to publish this game early so I can get suggestions and so that I can show people who are interested. If I decided to release it when it was totally finished, I wouldn't have as many good suggestions or an audience.
Plus, I'll be honest here: I mostly want to share this game with friends. I don't expect many sales until the game is out of Early Access. This gives my friends (and others who are interested) a way to play my game while I'm still making it better.”

“Ideally, about six months to two years. I expect that this game will be about 2x as good in six months and 4x as good in five years.
This is because I am a college student and I will likely be able to make significant improvements over the summer. I foresee further improvements as I publish more VR games and adapt what I've learned to this game.
(In one semester, I have been able to update the game from a physics throwing tutorial into something with explosives, skyships, missiles, and turrets).”

“The full version is much more of a game and almost open-world. Your actions have consequences. You destroy a colony and the Remnants send a strike force against you. You destroy a farming district and the Remnants are forced to build more farms in protected areas. You destroy a bridge and cut off trade. It will be more of an open-world experience. As it is right now, there are a lot of cool destruction mechanics, but it's wrapped in individual levels, like a tutorial. The way you destroy stuff (or how thoroughly) doesn't matter.
Ultimately, the end game should have turrets, ragdolls, AI, procedurally generated civilizations, a wider world that you influence with your destruction, and a lot more polish :)
The game will also be significantly more expensive, on par with other developed VR games like Beat Saber or Boneworks.”

“Basically a physics-destruction game like Angry Birds, except in 3D and VR and a ton more fun. There are 15ish unlockable levels, a ton of experimental levels (like Skyship War, Traffic, and Nuclear Reactor) and some sandbox testing.”

“Yes. The price will gradually increase. The next update (which will include ragdolls, turrets, and advanced skyships) will double the price and then it will slowly increase as I build out the open world until it is a truly awesome destruction game.
Once I feel like the game takes over 20 hours to complete and has endless replayability, the price will increase dramatically and then remain constant (though more updates will be released even after the price is stabilized).”

“I love feedback! I have a Discord server and I'll send free keys to people who give me good advice. I'll try to talk to people a lot and ideally adapt the game into its best version.
Discord link: https://discord.gg/twVCTKX”

Currently, the game is centered around throwing blocks at buildings to knock them down. Your throws are scaled up in power depending on the block, so you're able to throw 90 pound blocks at about 400 miles per hour and watch as they rip through the side of a building and cause the entire thing to collapse. Every level is hand crafted, and as you progress, you'll begin seeing realistic physics-based rockets, skyships, turrets, and even ragdoll human-like creatures

The game is in Early Access. Currently, there are several awesome features (AI-controlled skyships, for example) that aren't available because they cause a lot of lag. For example, when I built a Nuclear Reactor level and set it off, the resulting lag from the 10,000 physics collisions happening at once dropped the frame rate to around 30. That should never happen in VR, so that level and other potentially broken items are also not in the game.
(The game runs great, by the way: If you have a 1080 you should never have a framerate below 144. I wanted this game to run as smoothly as Beat Saber and to a large extent, it does).

The game is going to get better over time. Advanced turrets, ragdolls, and AI-controlled skyships are all in the works: I just need to optimize them. There will also be two more game modes included with the next update, Rampage (infinite procedural levels) and Archery (where you shoot down buildings with explosive arrows).