The Mechanical World of Dr. Gearbox

Unravel the forgotten mysteries of an aging adventurer by retracing his steps across four distinct environments. Overcome the odds by recruiting a deep roster of eccentric and fascinating creatures to aid you on your quest to discover the truth.
Reviews
All Reviews:
No user reviews
Release Date:
Developer:
Flamehawk Studios, Inc.
Publisher:
Flamehawk Studios, Inc.
Tags
Popular user-defined tags for this product:
RPG Indie Action Adventure Free to Play
+ 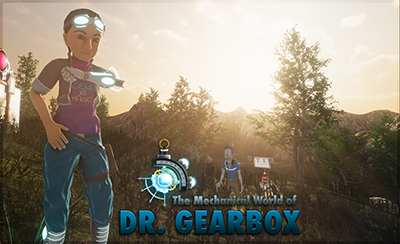 Unravel the forgotten mysteries of an aging adventurer by retracing his steps across four distinct environments. Overcome the odds by recruiting a deep roster of eccentric and fascinating creatures to aid you on your quest to discover the truth. Get invested in a compelling story while you learn a practical curriculum through our Battle Trivia system. Become proficient during Battle Trivia to unlock exotic loot and cast the most powerful spells.

You play the part of a child that innocently stumbles upon a hidden lab in Kerhonkson, NY. There you meet Dr. Phineas Gearbox, an aging scientist who for many years explored the world and invented amazing creations. You find Dr. Gearbox in a state of crisis. Two of his robotic lab assistants have gone missing and inadvertently caused an intergalactic disturbance that will change our planet forever if left unchecked.​

With Dr. Gearbox's trusty companion Botley serving as your guide, you must track down and dismantle an untold number of portals before the earth is overrun with critters from other worlds. The task will not be easy! All sorts of critters have already been spotted in various regions and will fight when encountered. Only by displaying your growing mastery of real world information can you harness the power of Dr. Gearbox's greatest creation: The Arcane Compass, an amulet that can channel the elements of the universe in ways that even Dr. Gearbox never imagined!