“We hope as many people as possible play this game and want to know whether this can approach our aiming "enjoy light action and rich stories".
If there are any missing or unnecessary things, we'd like to receive your feedback and improve the degree of perfection.”

“We think it will be until Spring 2020 at the shortest.
Many of the parts that can not be played with Early Access are nearing completion, but we still want to make a sufficient brush up during this period.
However, your feedback could lengthen this schedule.”

“The large difference is the number of chapters you can play.
4 chapters are included in early access version, but we plan to add 16 chapters more in the full version.
New characters, enemies and stages will come on the added chapters.
We will also adjust the balance of the battle and aim the action game with stress-free and well worth playing.”

“You can play 4 chapters and play all for about an hour.
Like the full version, there are 4 chapters that can be played when you start the game for the first time, and will be provided near completion without game balance and bugs.”

“Yes. We plan to raise the price as the full version will have more playable areas and features.”

“Please submit your impression, ideas and bug reports in the Steam community!”

Cowboy Yakuza is a third-person story-driven brawler centered around Cleveland Waingro, a very large and very pissed off American badass living in Japan. After losing his job, Cleve finds himself getting into trouble with the local Yakuza. Impressed by his Hulkamanian strength and uncanny ass-whooping abilities, they promptly recruit him into their organization. Vince, Cleve's dope-slinging buddy, sorts him out with drugs of unknown yet absolutely sketchy origin that help him accomplish incredible feats and fight off dozens of broke-ass opponents at a time - but in the midst of a Yakuza turf war, and with some seriously hardcore BMFs looking to put him down for a dirt nap, will said drugs help or hinder him? 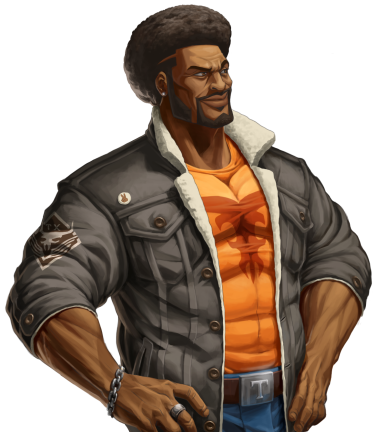 Cleve is a big ol' mean black dude, born and raised in big ol' mean Texas. He currently resides in Japan after scoring a totally meaningful and definitely not pointless job as an eikaiwa ("English conversation") teacher in Osaka. Unfortunately, Cleve is forced to seek a new source of income after up losing his job through no fault of his own due to some pretty racist treatment at the hands of his employers - an occurrence hitherto unprecedented in Japan, but not to the degree of the sarcasm in this sentence.
Vince is Cleve's closest friend in Osaka, and this aesthetically mismatched pair of bad hombres is pretty easy to spot in a Japanese crowd.
Cleve is extremely loyal to those he considers his true buddies. Because of this, Cleve is not exactly quick to make friends. He will thoroughly test a person’s values and ideals before taking the big size-18 step of opening up.
Cleve is very confident and, for the most part, fearless. He is well aware, however, that fools rush in where angels fear to tread. His lean-like cocktail of confidence and fearlessness can lead him into some hairy situations, and therefore straddles that fine line between personal strength and weakness.
Despite his strong sense of morality, Cleve is unforgiving and ruthless when it comes to exacting vengeance. Do Cleve or one of his friends wrong, you will be given no quarter whatsoever. 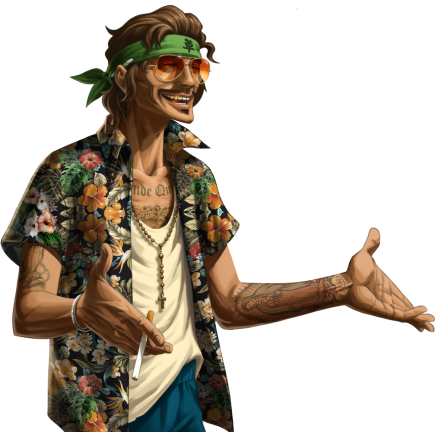 Vince is a quick talker. He's not exactly built to resolve issues in a physical manner, so he relies on his resourcefulness and his ability to stretch truths to get what he wants or to extract himself from less-than-bitchin' situations.
He makes ends meet in Osaka by peddling drugs - usually, as he likes to refer to them, "trees" or "nose clams". Vince is 100% the sort of guy to get high on his own supply, often prohibiting him from accomplishing such Herculean tasks as properly verbalizing thoughts and generally making sense, but through the sheer brute force of stoner charisma he's always somehow able to turn the conversation around to his favor in the end. 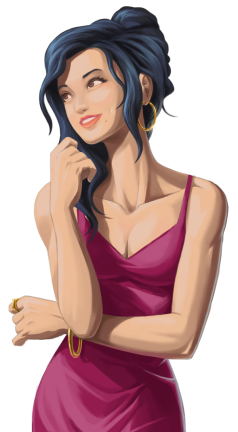 Ami is a Japanese woman working at Club Macao - which is managed by the Sawada Clan. While her official job title is "hostess", her contract apparently failed to mention her secondary and tertiary duties, such as "loser therapist" and "ad hoc corpse removal specialist", respectively. She is currently working for Matoba in order to pay off the serious debts she's incurred.
Ami was originally duped into spending a large amount of money at a host club and on jewelry - more than she or anyone she knew could realistically pay back - and was subsequently "introduced" to a friendly neighborhood debt broker to sort out the official repayment paperwork. After that, she was pressured into working for Matoba to work the balance off.
She is quite a charming and attractive girl - the exact reasons Matoba selected her for her veritable indentured evening servitude. She is also very proactive, never sitting around talking for long before jumping into action. This makes her fairly impatient as well, and she quickly becomes irritated when left with nothing to do. 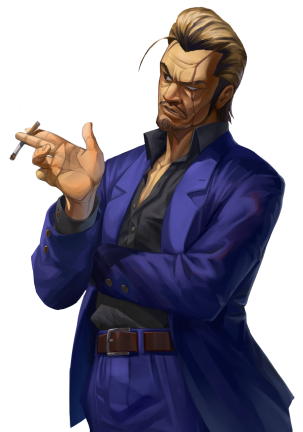 Matoba is no small-time thug. He has proven his worth as well as his badassery, and in the eyes of his boss - Dozono - is a valuable asset. If there's a that job needs to be done, Matoba will get it DONE-done. He presents himself with an air of the utmost professionalism and confidence, something akin to a top-tier Bond villain. Despite missing his left eye, Matoba retains a polished handsomeness.
Matoba doesn't keep up this gentleman's guise all of the time, however. When there is no work to be done, his innately fearful mannerisms and outward appearance tend to relax significantly, leading some people to believe that there is a shimmer of kindness behind the dark Lecterian mask. These people are mistaken. There is patience, but there is no semblance kindness nor empathy to be found. Not anymore.
Matoba’s success stems from his intelligence and composure as well as his utter dearth of mercy for those who would stand in the way of his progress on the road to success.
He was handpicked and tasked by Dozono himself to lead the Sawada Clan in the war against the Tange Clan.
The Tange had historically controlled the nearby cities of Kobe and Himeji, but are making efforts to move in to Osaka - the longstanding home turf of the Sawada clan.

Active Gaming Media would like to express special thanks to Goichi Suda, aka SUDA51. 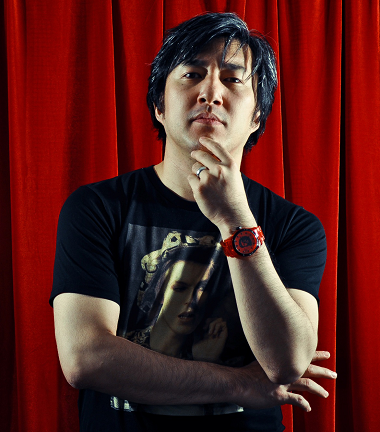 SUDA51
Grasshopper Manufacture Inc. CEO/Game Designer
This game was made with partial support from visionary creator Goichi Suda of Grasshopper Manufacture, whose universally acclaimed sense of world-building and unmatched flair for storytelling provided much inspiration in this game's development.

This game may contain content not appropriate for all ages: Frequent Violence, Blood, and some Strong Language.