Trial of the Gods: Siralim CCG

Trial of the Gods: Siralim CCG
Developer
Thylacine Studios, JaysGames
Publisher
Thylacine Studios LLC
Trial of the Gods is a collectible card game based in the world of Siralim. Collect over 100 creature cards with unique traits and use them to battle against the gods. Features a lengthy campaign with two difficulty modes, along with randomly generated post-game content!
All Reviews:
Positive (32) - 87% of the 32 user reviews for this game are positive.
Release Date:
Developer:
Thylacine Studios, JaysGames
Publisher:
Thylacine Studios LLC
Tags
Popular user-defined tags for this product:
RPG Indie Strategy Card Game Trading Card Game Card Battler Collectathon Turn-Based
+
Reviews
All Reviews:
Positive (87% of 32) All Time 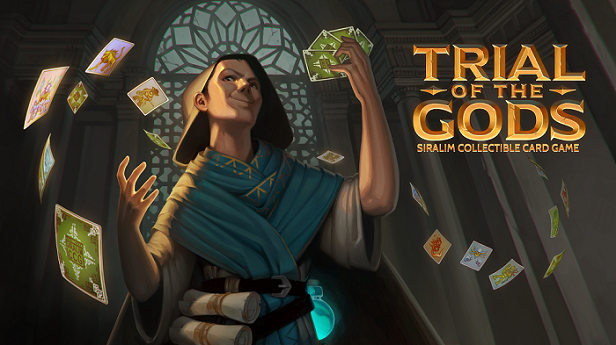 Trial of the Gods is a collectible card game based in the world of Siralim. Collect creature cards with unique traits and use them to battle against the gods.

Travel the 15 realms of Rodia and challenge the gods! Each realm consists of 6 battles. You will be rewarded with new cards and experience points for winning these battles, allowing you to experiment with new deck compositions to ensure your victory.

Each card has unique stats and a trait that changes the way they work in battle. Use the Skeleton to snipe your foes from afar, or utilize a kamikaze-style attack with the Apis. The possibilities are endless!

Siralim games are known for their insane amount of post-game content, and Trial of the Gods is no different! After you finish the campaign, you'll unlock a Hard Mode that is sure to challenge even the best of players. In addition, you will gain access to the Itherian Realms - randomly generated battles that allow you to empower your cards if you win, giving them increased stats.