“Monsters of Kanji 2 is going to be a bit different from its predecessor.

With the first game I started developing mostly for myself - to improve my Japanese and "have some fun making stuff". After a while it turned into a proper game, but at that point I was so far into development that I realized I skipped many important steps:
Early feedback being the critical one.

No matter how much you want your game to be "something you like", at the end of the day, if you decide to sell it, you also want others to have a good time with it. And for that you need to know what others do or don't enjoy.

So this time I still want to make a game I personally would have fun with, but I also want it to be more user-friendly, more immersive, more communicative. I want Monsters of Kanji 2 to be more clear on what it's trying to be. And with that, more fun for everyone.

With RPGs there is just so much to think about in terms of balance and storytelling and some of it depends on the player's taste. Since playtesting often begins only after most of the important decisions have already been made, going back on some of them can not only cost a lot of time, it can also put a strain on you, one that I would like to prevent creating this time around.

That's why I want to introduce you to Monsters of Kanji 2 with the Steam Early Access version that I plan to release soon. Getting as many early opinions as possible would help me as a solo developer quite a lot. And I will do my best to make it worthwhile for those who give it a go in its current state.”

“All of this could be subject to change, but right now my plan for the full version of Monsters of Kanji 2 is as follows:

- More monsters: Right now there are 16 monsters available. The full game is going to have 150
- More planets: In the end, there should be 8 main planets, 5 of them unlockable in whatever order you like
- More features: Next to some other new features like a planned class system, the full game is going to have more medals, more upgrades for the MECH MARKET and more battle tracks to unlock in the HUB SATELLITE.
- More side quests
- More story and characters: New planets will bring new stories and characters to interact with. Once all of those are completed, there should be at least 20 hours of gameplay here, wrapped in a story that will bring MARTY's adventures to a close.”

“The game is currently 3 - 5 hours long, depending on how much of a collector you are.
In this time you can explore the following areas:

In terms of features, here's a list of what and how much of it is available so far:

Everything that isn't properly built yet is clearly gated and/or has an added "Not available in v0.2" somewhere. That way you will always know why something isn't accessible yet.
Everything that IS accessible should be in a proper playable state.

I've also tried to build the game's foundation in a way that every save file created with version 0.2 should work with later versions. That way you can just hop back into your journey whenever a new update launches and continue where you've left of. However, depending on how much of this foundation I'm going to adjust based on feedback, this could not work out after all. If an update will cause problems to previously started save files, I'll, of course, notify everyone about that.”

“To give early adopters a bonus and also to ensure that players get a fair amount of content for their money, no matter during what point of development they join in, I decided to start out with a lower price tag. I then want to add new planets and features, each time raising the game's price a bit.”

“I'll open up a thread in the Steam Community Hub, detailling everything about the current Early Access plans. Of course, you're welcome to post any feedback you have. I always try to get back to you as soon as possible. Also, the twitter-account for Monsters of Kanji is a good way to contact me. It's also where I try to get the word out about both games.”

The sequel to MONSTERS OF KANJI raises the stakes. MARTY and his friends are on a new mission that will decide over the fate of the entire galaxy. 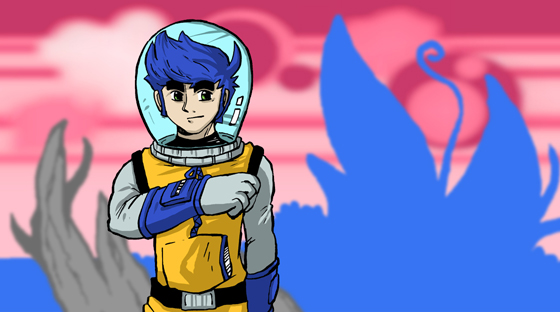 Find out the truth behind the events of MONSTERS OF KANJI.
Grow stronger and defeat dangerous bosses.
Discover tons of secrets on 8 completely different and unique planets.

And in the end... face the IRONASHI!

- No more vocabulary in this one, but there are 150 Monsters of Kanji now...

- All of which can be brought into your team, levelled up and upgraded with a simple yet addictive skill-system

- 8 huge planets to explore in whatever order you like

- No more random battles! All enemies can be seen on the field

- Emotional story that builds on the events of MONSTERS OF KANJI, but can also be experienced without knowing anything about the first game

- MARTY'S SUIT can be upgraded to give him new methods of traversing the game world. Jumping off ledges? Swimming through water?
Find out what new skills MARTY will be able to use!

- Choose how to develop MARTY with the new CLASS-SYSTEM

- Over 20 hours of oldschool JRPG goodness