Open world, many plots, especially suitable for trying what you dare not do
All Reviews:
Mostly Negative (35) - 22% of the 35 user reviews for this game are positive.
Release Date:
Developer:
DRILL Games
Publisher:
DRILL Games
Popular user-defined tags for this product:
RPG Indie Simulation Adventure Casual
+

The game was originally created and released by DRILL Games, which is a personal studio.
Please read the game description carefully, which is very important for you to decide whether to buy the game or not.
Game information is based on this. Information from other channels or media may lead to some misleading results.

Update logs------------
July 20
- Players will now have guides to find their way to take-out.
July 23
- Camera Angle of View: Now players can rotate the camera to adjust the angle of view, rather than the previous passive camera follow mode;
- Commercial NPC Increases Marking
- Promotional NPCs add logos to sales hours in malls
August 2
- Night roll DISCO has been incorporated into the version. There are bar for consumption, drinks promotion, steel pipe dance, rest area, dance floor, toilet and vending machine for interaction and recovery. 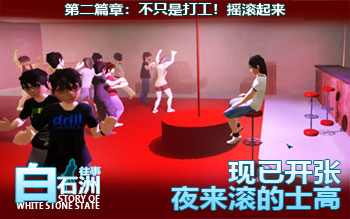 Baishizhou Past is a small and medium-sized independent game based on Simulation and plot.

Q: Is the game an open world game?
A: The game is played in an open world game mode, but it is not an open world with a huge map, but a compact map. There is only one street in the real Baishizhou (explained below on the geographical knowledge of Baishizhou). Although Baishizhou is small, there are many shops, and its population density is very high. There are 150,000 people living in it! It is in these places that the game unfolds its story.


Q: Why is the place of the game Baishizhou?
A: Firstly, the author of the game lived here for more than two years and was very familiar with it. Secondly, considering the cost of production, it is impossible for him to make a huge map like a large team. As for the old Baishizhou reform, the author has set up a project and made almost the same one. Some people have told him that he knows about the old change, which is not mentioned in the game at present.

Q: Is the game a part-time simulator?
A: There are simulation games in the game. Part-time work is only one part of them. There will be more simulation games in the future updates, such as disco (soon to be launched), such as hospitals (later versions). These places can also be consumed except for part-time work. Of course, the current version has no other consumption besides diet, but it will soon be launched. Free updates will have other consumption patterns

The author himself spends much more time playing simulated life than playing open world games, so he prefers simulated play. Referring to the map of simulated life is actually compact, because the map simulation is not easy to develop, and more is based on the plot. Considering the cultural background, China's national conditions tend to be compact. This is not to say that China is small, but that most people actually work in a two-point, one-line mode. If you make a big map and drive freely everywhere, it is more like a sparsely populated country. In China, you may have to make a traffic jam simulation just like China, so even if I have a lot of money. It's a tendency to make compact maps.

Q: About Game Style and Picture Quality
A: This is entirely a personal preference. At present, the style of painting is realistic and Q-oriented, and the environment is realistic and bright; the author is not interested in the high models of 3A games, just as some people like pixel games and some people like 3D games; because independent games still have to adhere to a little personality to have an independent flavor.