“This is the first game we’re producing.
It’s become what it is today after going through a number of development stages from the initial planning.
However, in a small company like this, there weren’t that many people who can make objective assessments of this game. We had to think carefully about how we’d continue.
After several meetings, we’ve decided to put this game in Early Access.
Early Access is a chance to verify whether this game is fun to play.
It’s also an opportunity for us to find any errors that we haven’t been able to discover before.”

“We plan to open the official version about 3 months after the release of the Early Access version.
However, changes to the schedule may occur, depending on a number of elements.”

“In the official version, you can play 5 planets that form Act 1 of the IDUNN Guardians storyline.
Sub-stories, planets, and monsters are added, based on your progress.
Now, the story is only completed by the second planet, and these stories are represented by the main flow, and the sub-stories are not applied.
In the official version, NPC is added, and subquests that NPCs have are added as well.
The early access version has all the features of the full version. We've got early access, and if there's any inconvenience to play,
I am going to update the function by improving the function in the official version.”

“The Early Access version can only play two planets and an infinite training center.
Game play is no different from the regular version. But the story of the game is only partially applied.
That won't happen if you don't understand the flow of the story.
We've refined the story as simple and neat as possible. This is because users want to be able to enjoy a little faster and lighter play.
We've set up early-access versions of monsters not to be risked to test for fast play.
Until you leave the planet, the monsters you killed won't be called rispon.
If you haven't finished your quest, go to Idun Bay and try your planet again.
If this causes inconvenience to play, it will be completed in a revised version.”

“Although the price of 1.0 hasn’t been specified yet,
we expect the price will rise if all of the content and languages we intend to apply are added.
If we do raise the price, we will notify about it in advance.”

“We’ll listen to the opinions of users through various channels.
We will collect feedback from SNS accounts, emails, and forums.

The oil prices around the globe have skyrocketed to the point where people are forced to pay whatever price the seller sets. The world has also been seeing more riots than ever due to food shortage problems.
Endless wars over borders wrought chaos on Earth.
IDUNN Co., a global high-tech corporation, promoted a power generation project in which small planets would supply energy for the world.
The company then planned to create , a facility similar to Noah’s Ark
where everything that humans need to live—water, food, energy, etc. —will be supplied
from the small planets for self-sufficiency.
This plan saw gigantic investments from various countries such as the United States and China. 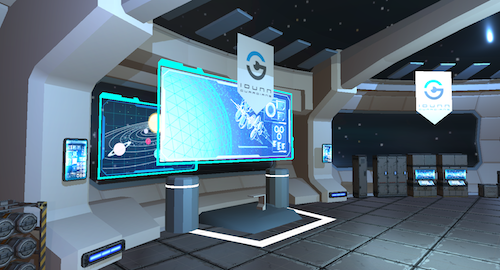 After fierce competition, the first group of residents was selected.
Through IDUNN Bay, IDUNN Co. seemed to be searching for Planet Goldilocks,a planet that could support life, and planning relocation to another galaxy.
In reality, however, the company was planning to build a military hub on another planet to conquer and colonize other planets.
Odin, the head of IDUNN Co.’s research center and source of the latest cutting-edge technology,
found 5 small planets in the Bairan Galaxy that could supply 5 different energy sources—earth, water, wind, fire, and nuclear fusion. And so, he successfully developed a new system for IDUNN Bay to use these forms of energy.
It was an energy revolution, and the first time that energy was supplied from outer space.
The Bairan Galaxy, however, was the main playground of the “Undying,”
space pirates that invade and plunder small planets and attack and pillage probes passing by.
To the Undying, the Earthlings had come out of nowhere and just started harvesting energy. “Beast,” commander of the Undying, believed that the Earthlings posed an obstacle to the Undying, and so he declared war on IDUNN Bay.
To prepare for the upcoming war, Beast helped some of his most trusted men from Planet Nass,
a jail for nefarious criminals.
Knowing that they were at a disadvantage in this war against the Undying,
IDUNN Bay posted billboards throughout Bairan Galaxy to recruit mercenaries.
An exorbitant reward was offered for the head of Beast, the greatest threat of the Bairan Galaxy.
The war between IDUNN Co. and the Undying has begun, and you’ve just signed up to fight for IDUNN Co. as a mercenary.
Are you ready to take care of Beast and win the reward?

Now a member of the IDUNN Guardians as a mercenary,
you’ll be given missions to go to various planets that are being exploited by the Undying and eliminate them, one planet at a time.
However, your work doesn’t end there. You must collect the important energy elements from those planets.
Once you collect the elements, you will obtain a new weapon and move on to the next planet. 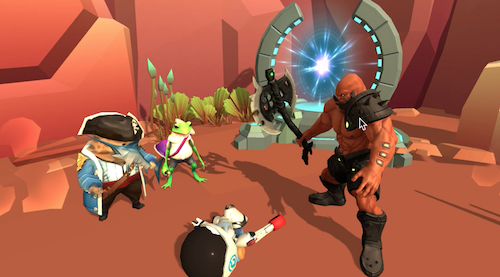 [How to Play]
IDUNN GUARDIANS is a single action RPG that can enjoy light and fast play.
An AI killer swinging a sword like it’s a ladle, a robot wizard who gathers and uses energy from collected souls, and a human-alien hybrid gunman You’ll choose one of these 3 characters to play the game.

Game play is quite simple. Upon receiving quests from Odin, the head of IDUNN GUARDIANS, go to different planets via Gate Way and wipe out all of the enemies there.
You’ll encounter a wide variety of monsters.

Eliminate the enemies of planet and collect the main elements of the planet!
You can get different elements for each planet.
Element is a very important resource in the universe. if you sell it to a merchant, you can get a big reward.

There are many NPCs living on each planet.
If you’re curious about the sub-stories, find them and start a conversation with the NPCs on the planets.
You just might be interested in what they have to say.

Clearing the quest for a planet will provide new equipment for the next planet.
Meet weapons that get stronger as you move around the planet! 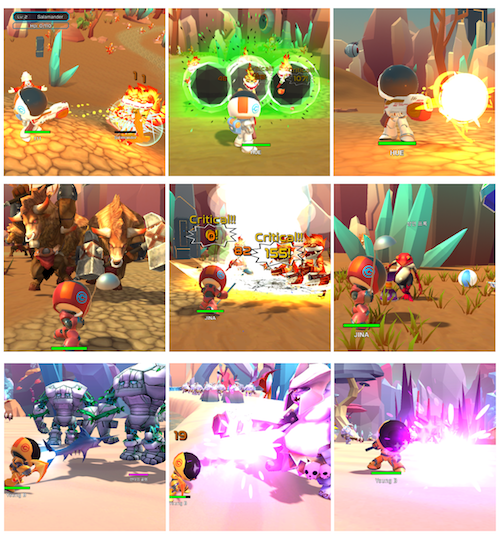