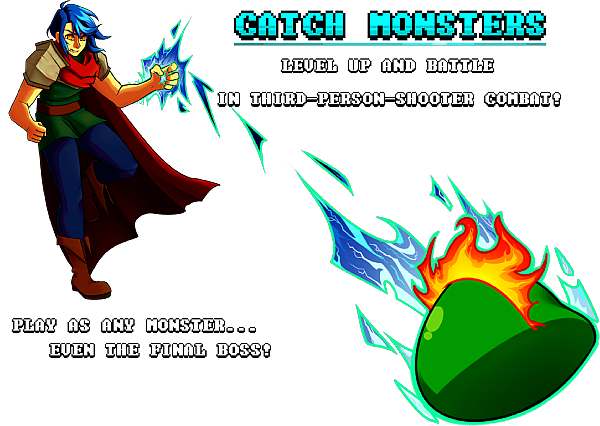 A monster-catching game for the modern age! Instead of being turn-based, Xander the Monster Morpher is a topdown-shooter where you can catch, train, and fuse monsters together!

Each monster has their own attacks and passive perks. With fusion, you can put any attack and any perk on ANY monster! You can even choose what the new monster looks like!

Xander was found face-down in the middle of the woods by an old lady. For some reason, he looked like a giant blue frog- so he did what any hero would do and freeloaded at the old lady's house and the local inn for a month.

After realizing he should probably do something about the fact that he was now a frog, he began to train in the art of morphing so he could answer the call of duty from a strange voice in his head...

Cutscenes are animated (and skippable, for you speedrunners out there) and have many, many plottwists. Characters backstab each other, lie, and onscreen (non-graphic) death occurs. The story is a pun-filled one-liner fest, but be prepared for some scary moments and tears.

Monsters have a small chance to have a different color palette. Aside from shinies, there are also different forms of monsters that appear in different areas of the game (such as leaf lizards having dead leaves in colder climates.)

Finish the game to unlock special gameplay modes! Battle in Nuzlocke mode, where your monsters die permanently and you can only catch one monster per area - or explore randomizer mode, where all the monsters are shuffled! You can encounter the final boss in the first route as a lv.1 common monster!

The game will update periodically with new monsters, events, and story! Look at the game's Discord or Twitter to find out when events are happening!