“"Considering the scale we are wanting to accomplish and the time it will take to arrive at the full package, it bodes well for us to permit our fans with a early build whilst still being in development. The idea of the game permits us to take exceptionally fine detail into the following, (constant game play loop, immersive RP orientated game play) and develop them while we keep on improving new aspects of the game. This permits a development team that listens to a community that can provide constant feedback and criticism that our team can work off to create our end goal a MMORPG"”

““We are anticipating for CivilContract to launch sometime in 2020.””

““In the complete version, we are aiming for 120 player servers. In addition what we have planned are a full compliment of vehicles & weapons, which goes from the small (bicycles), all the way to aircraft. Lastly we intend to fully flesh out the core game play mechanics by including more in game jobs and tasks, refining the game play loop and the immersiveness of the RP.””

““Currently, CivilContarct is in a stage where RP is fully implemented with several updates to handling and animations, and were the UMG has mostly been redone.””

““The price of the game after early access has not been yet discussed.””

““Currently, CGRP developers are very active on the Discord gathering feedback and bug reports to improve the game."”
Read more
Check out the entire CapitalGamingRP franchise on Steam 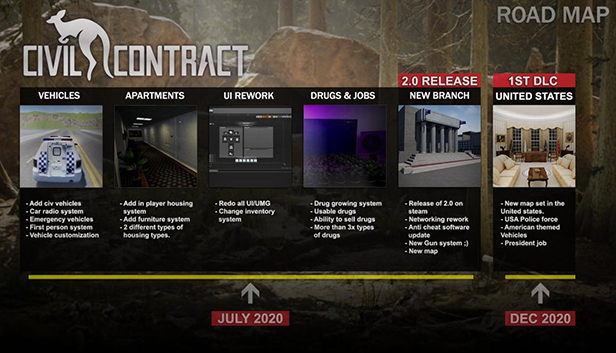 CivilContract is a modern themed role-play adventure game set in the vast open world environment of Australia. The game focuses mainly on the player, creating an environment that feels alive and that is constantly moving.
It will contain a enormous open world map, realistic vehicle-based game play mechanics, and realistic gun play mechanics, to create a immersive, roleplay orientated experience with real-world and real time RP.

Have you ever wanted to be a working class citizen in a beloved city? Well now is your opportunity in the city of Ozburg! You can work as a load of jobs going from a Caretaker to a professional bodyguard. All of the jobs there is to choose from range in their salaries but the roleplay is entirely left to those who play! You don't just have to be someone who follows the law you are able to run red lights, get into high speed chases and much more! Not everyone wants to follow the law, do you?

Ah, of course vehicles. No matter where you are working everyone would be in need of a vehicle in our big open city. Again we have a range of vehicles going from Volvo's to classy Phorche's you can go and buy the car of your dreams at the car dealership! You may ask why is a car that important? Driving a car is important for people because it provides status and the opportunity for personal control and autonomy. In sparsely populated areas, owning a car is even more important, since it provides the only opportunity for travelling long distances due to a lack of public transport.

weewooweewoo Apologies i was just testing the police sirens on our new and improved police cars. Police Officers are how the city stays running for so long... They are the backbone of the city fighting crime out of it! You are able to sign up as an Officer to help the fight against crimes and stop those pesky street racers, people who take up the role as a Police Officer are highly praised and commended for their bravery and loyalty to the city of Ozburg. Police Officers are equipped with a police baton, a tazer and a standard issue Klock 18.

Do you know what is better than being a law abiding citizen? Of course you do, being a bank robber! Robberies are what keep the police on their toes but it also gets you a lot of money to spend on what you wish if completed successfully of course. Become the best robber of all time and stand out from the rest. But standing out from the rest comes at a consequence, you will become a target to everyone.. Don't turn your back on someone for too long...