The 2020 Steam Autumn Sale is now live, with great deals across the Steam catalog through Black Friday and Cyber Monday, ending at 10am Pacific on Tuesday, December 1st. Discover featured titles and franchises, personalized recommendations, plus browse top titles by tag when you shop the Autumn Sale now!

Autumn Points Shop Items
We are also making the Autumn Sale art available in brand new animated Points Shop items, including a new Autumn profile, all available now. Additionally, the Debut Collection Badge will be removed from the Point Shop on December 9th @ 10am Pacific. This is your last chance to level up your Debut Badge. 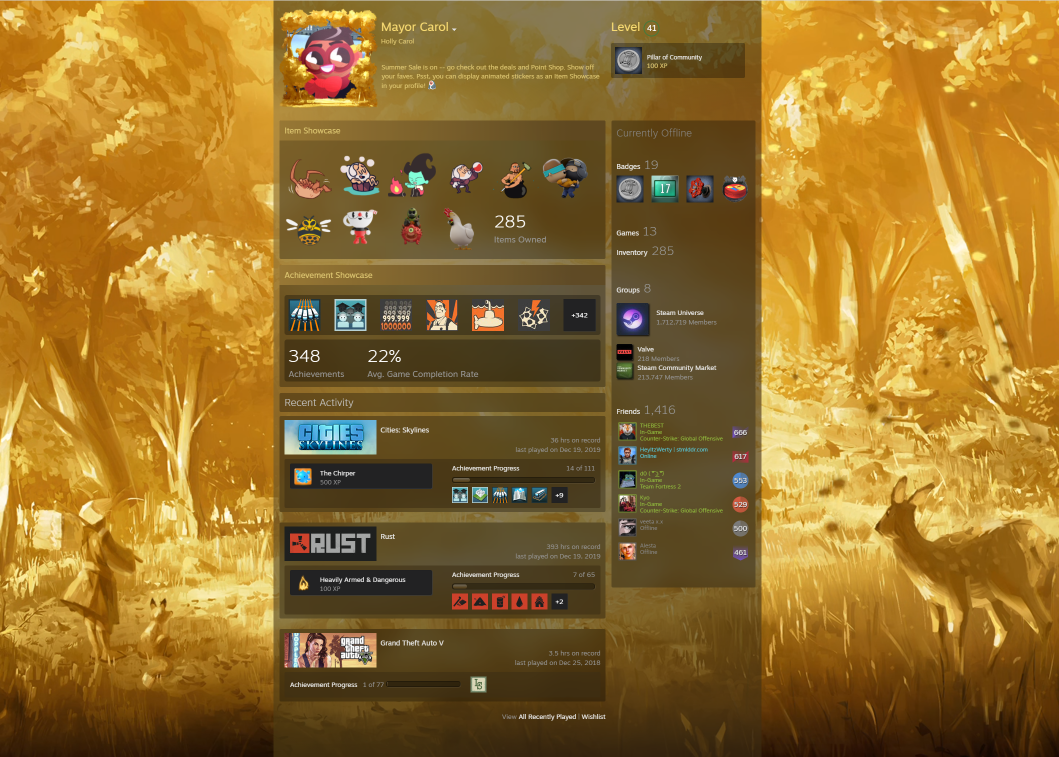 
We're continuing our Top Release series with a look at games released in October. As with past months, this list highlights the top 20 products measured by revenue generated during the first two weeks after release. We’re also highlighting the top 5 free-to-play products, measured by their unique player counts following release.

Terrifying Top Releases
October culminated with Steam's annual Halloween sale, so it's no surprise that the Top Releases of the month include a number of horror games that really resonated with players. In Silence provides a unique twist on the survival-horror multiplayer experience, while Dark Pictures Anthology: Little Hope and Amnesia: Rebirth take players on fresh new narratives that are sure to deliver plenty of chills. Not every player has the fortitude to jump straight into a horror game, so thankfully October saw a wide variety of other genres and themes to go for. From the immersive and epic RPG experiences in Baldur's Gate 3 and The Outer Worlds to the action-packed multiplayer hits of STAR WARS™: Squadrons & FIFA 21, October's list features plenty of choices for every type of player.

These teams come together in a variety of ways, so for this month's list, we caught up with some of them to hear a bit about their unique stories:

As the name might imply, Tuxedo Labs began as a technology experiment with Dennis Gustafsson designing a system to create fully destructible voxel worlds. As the experiment progressed, Dennis realized that smashing environments made of voxels could make for a pretty compelling game. After bringing along a team of industry veterans that he'd met through the years, the sandbox heist was brought to life.

After 20 years in the gaming industry, both working at Ubisoft and co-founding Amplitude Studios, Mathieu Girard formed Tactical Adventures to turn his lifelong passion for tabletop RPGs into a game. Not only does the team at Tactical Adventures come from all corners of the video game industry, most have plenty of experience with tabletop RPGs as well. So naturally, each week the team shares in some epic tabletop campaigns.

Beyond the Wire - Redstone Interactive

What began as a small exploratory side project within Offworld Industries, slowly grew into a brand new team: Redstone Interactive. Formed by veterans of Squad and Post Scriptum along with passionate members of their respective modding communities, Redstone is now completely dedicated to the Early Access development of their debut true-to-life WWI FPS, Beyond the Wire. Time will tell what mods the Redstone community creates, possibly cultivating the next generation of this development legacy.

While working on a pixel-physics prototype in a coworking space in Helsinki, Finland, lead designer Petri Perho recruited fellow developers Arvi and Olli to form Nolla Games and create their innovative and highly successful debut: Noita. All three members of the Nolla Games team got their starts on Steam with completely separate games that many fans will immediately recognize.

Here's the list of October's top releases ordered by release date (we've organized this list on a handy sale page too):

Beyond The Wire
Redstone Interactive (Canada)


And here are the Top 5 free-to-play titles from September, ranked by total unique player count:

The Steam Fighting Game Sale is ON!
Steam Blog - Erik.P

Lace up those gloves and pick up some skull-crackin' deals on the best fighting games on Steam, on now until November 16th at 10am Pacific! From 2D and 3D Fighters to Party Brawlers and Beat ‘em ups, the Fighting Game Sale comes in like a spinning piledriver with discounts on games like:

So what are you waiting for, Fighting Game Fans? Dropkick on in here:
https://store.steampowered.com/sale/FightingGameSale
Share:

Welcome to Dreadlands! A perilous landscape brimming with potential in the form of Glow. Command one of 3 unique factions in this turn-based tactical RPG and play through their campaigns, be it solo or Co-Op, or battle it out in PvP. So far no one has tamed the Dreadlands. Will you be the first?

- Fixed The Last Stand's Village Scavenge map not having any weapons.
- Recompiled common infected materials to fix visual errors on Linux.
- Removed alarm glass from a non-alarm car.
- Fixed Special Infected being able to trigger the helicopter flyover when leaving the bumper car building on Dark Carnival Barns.
- c7m1 and c12m5: Fixed a few nav issues that caused tanks to get stuck.
- c1m1: Marked all areas outside of building on ground as not allowing any spawns.
- c11m5: Marked a few areas near the plane crash fire as no-threat to prevent tanks from spawning too close to the fire.
Share: