Five of the Best: Villains
Civilization IV: Beyond the Sword Trailer

Five of the Best is a weekly series about the small details we rush past when we're playing but which shape a game in our memory for years to come. Details like the way a character jumps or the title screen you load into, or the potions you use and maps you refer back to. We've talked about so many in our Five of the Best series so far. But there are always more. 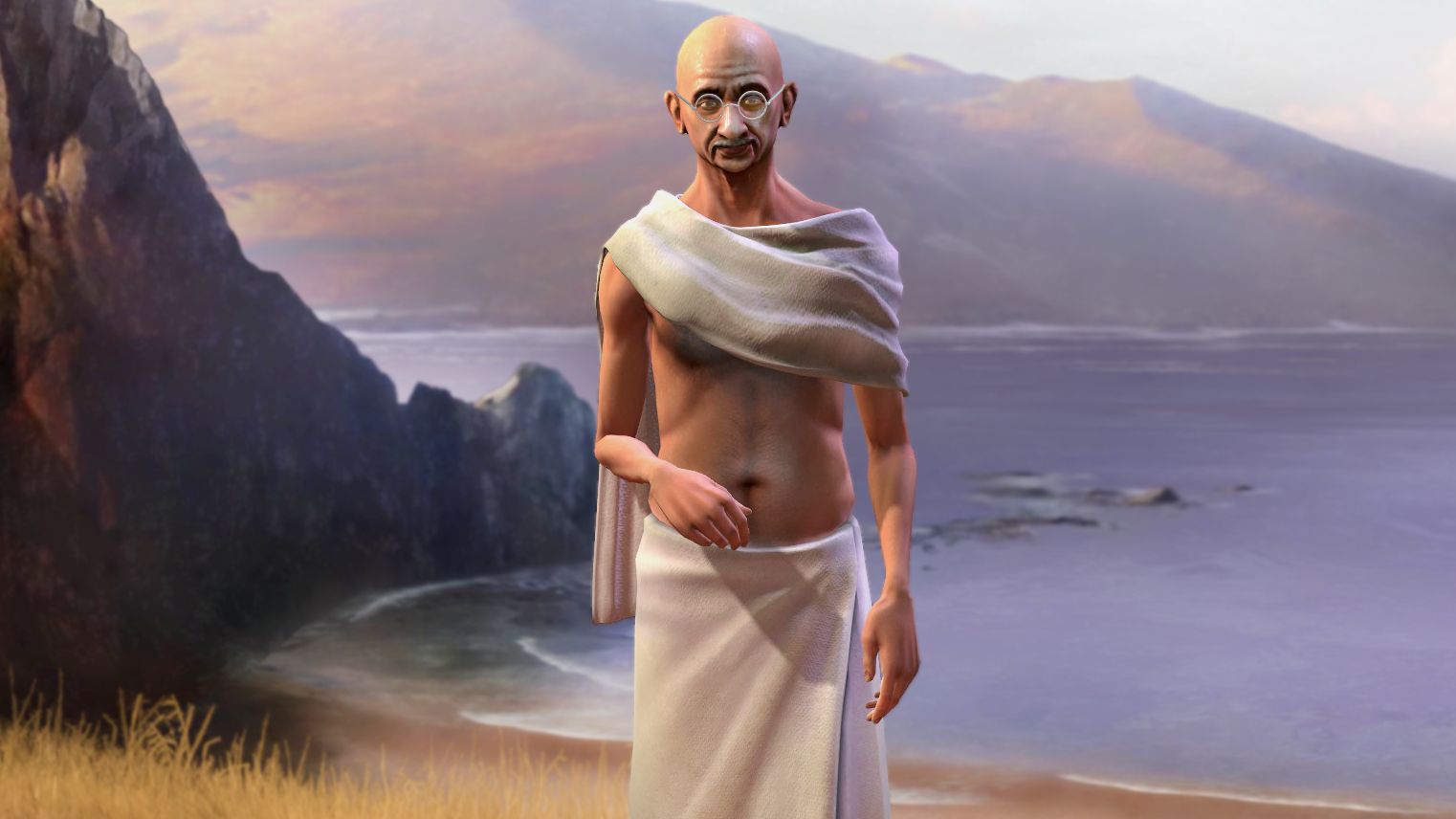 Gandhi is one of the most unique figure in history. His adherence to non-violence, his establishment of a full-fledged philosophy behind it and, above all, his success>, are practically without precedent. Kings, empires and leaders can often blur into each other. The locations change, the dates are different and the numbers differ, but the essence remains the same. Gandhi was something completely different, and yet games try to represent him with the same pieces they use for everyone else – and so they always make him something far less than he was.

END_OF_DOCUMENT_TOKEN_TO_BE_REPLACED

The best games of the decade on PC
Dota 2 - contact@rockpapershotgun.com (RPS)

It’s been an eventful decade for PC games, and it would be hard for you to summarise everything that’s happened in the medium across the past ten years. Hard for you>, but a day’s work for us. Below you’ll find our picks for the 50 best games released on PC across the past decade.

END_OF_DOCUMENT_TOKEN_TO_BE_REPLACED

Well, it’s finally happened. On Monday, Apple released the feared MacOS “Catalina” update, killing compatibility for dozens of 32-bit games. From this week onwards, updated Macs just flat out won’t run ’em. In the constant churn of developing newer, faster, and sleeker operating systems, the Mac makers have given curators of older games a simple choice: put in the work to bring your games up to speed, or we’re leaving them behind.

For some publishers, updating countless classics simply isn’t worth the effort, leaving many 32-bit hits in the ground for good.

END_OF_DOCUMENT_TOKEN_TO_BE_REPLACED

To this day, the jaunty static of the opening jingle to Harvest Moon: More Friends of Mineral Town brings me back to a simpler time. Summer evenings spent hunched over my Game Boy SP, a pane of glass between me and nature s suburban bounty as I tilled my little squares of land, pet my happy little chickens, and bribed a town s worth of reticent heartthrobs into falling for my little blonde avatar, Pepper, with an onslaught of ores, animal products, and various culinary delights (but never cucumbers, ya gummy-mouthed fish-man).

Harvest Moon was about as wholesome as wholesome gets, my first videogame love, but as the days turned to years, we grew apart. Since then, I ve filled the hole in my heart with the usual suspects, (Stardew Valley, Rune Factory, and so on) until there was only one thing left to do: make my own Harvest Moon. And so began my ongoing personal quest to turn every game I own that is unfortunate enough to not be Harvest Moon into the farming simulation game they were always meant to be. Here, in true naturalist fashion, I present my field notes in the hope that we may go on to tame this new frontier together.

END_OF_DOCUMENT_TOKEN_TO_BE_REPLACED

Your time is important. And you know what? So is mine. Here s this week s podcast, the Electronic Wireless Show. It s about how your life is dripping away every second you play Stardew Valley.

END_OF_DOCUMENT_TOKEN_TO_BE_REPLACED

I love Civilization 6, but sometimes I pine for the art style of its equally wonderful predecessor, Civilization 5. Civilization 6's cartoony vibe is all well and good, but when you've got an entire civilisation's worth of people resting on your every decision, a serious look is sometimes required.

Thankfully, there's a mod for that - and this one's from a developer at Firaxis.

The Environment Skin: Sid Meier's Civilization 5 mod for Civilization 6, by the game's art director Brian Busatti, changes the visuals of the game to better match the colours and tones of Civ 5.

Ah, 2010! Lady Gaga and Beyonc were tearing up the dancefloor with Telephone, Inception was fuelling one million drunk ‘philosophical’ conversations, Jackass had gone 3D, and Civilization V had yet to reach that point in every Civ game’s lifespan where it’s declared superior to its successor. If you wish to party like it’s 2010, you might enjoy a new Civilization VI mod made by actual Civ 6 art director Brian Busatti. It aims to make Civ 6’s landscape, buildings, and units look more like Civ 5, less vibrant and more ‘realistic’. Yeah, but like, what if we’re still dreaming we’re playing Civ – does the game ever stop or will “one more turn” keep going forever? Makes you think, maaan.

END_OF_DOCUMENT_TOKEN_TO_BE_REPLACED

For the first 5000 years, nothing much happened. We must have embarked on our epic enterprise sometime in late 2013, though neither of us suspected we were about to spend the next five years embroiled in a seemingly never-ending coop hot-seat game of Civilization 5. If we had, we'd probably have played something else instead. It was folly, but by the time we realised, it was too late; we had become thoroughly invested, the game had taken on a life of its own, and there was nothing else but to see it to its (eventual) end. On and off, we kept chipping away at our task, sometimes meeting every few weeks for a couple of hours, sometimes once every couple of months. But soon our time with the game had to be measured not in months, but in years, and our game of Civilization had become a sort of parallel history to our personal lives.

When I sat down to prepare this article, it felt like historical or archaeological research. My friend and I compared notes, trying to reconstruct what had happened years ago. We gathered our save games from several machines, flash drives and Google Drive. I even rifled through ancient emails which mentioned our game in passing in the hopes of pinning down the timeline. In the end, the oldest save game we could find dates back to January 2016. After about 200 turns (and more than two years of playing), we had just entered the 1860s. After that point, our game is fairly well documented. Before, however, lies nothing but vast stretches of prehistory, a long dark age illuminated by nothing but the faint and flickering spotlights of our unreliable memories. It's easy for beginnings to get lost in the mists of time.

We started our game on either side of a vast lake set in a subcontinent, the south-eastern-most part of a Pangean super-continent. My early empire, Carthage under Dido, occupied the parts between the western shores of the lake and the ocean farther west. My friend's and ally's Celtic empire, led by Boudicca, lay to the east of the lake. We know for certain that soon after our early expansion, we ran afoul of another confederacy, consisting of Rome to the north and Greece to the west, for reasons largely lost to time (possibly, it was the Celtic annexation of the city state of Z rich which exacerbated tensions). Rome declared war against the Celts, dragging Carthage as well as Greece into the conflict. The Celtic city of Truro bore the brunt of Caesar's aggression. Over the course of several thousand years, Truro was taken and eventually retaken again and again, its population decimated in the process.

Actor and voice actor William Morgan Sheppard, known for his work in video games and sci-fi television series, has died at the age of 86.

Outside of video games, Sheppard took on several notable roles in Star Trek, such as Quatai in Star Trek: Voyager episode Bliss, and Data's grandfather Ira Graves in The Next Generation episode The Schizoid Man. He also played the older version of Canton Everett Delaware III in Doctor Who episode The Impossible Astronaut.