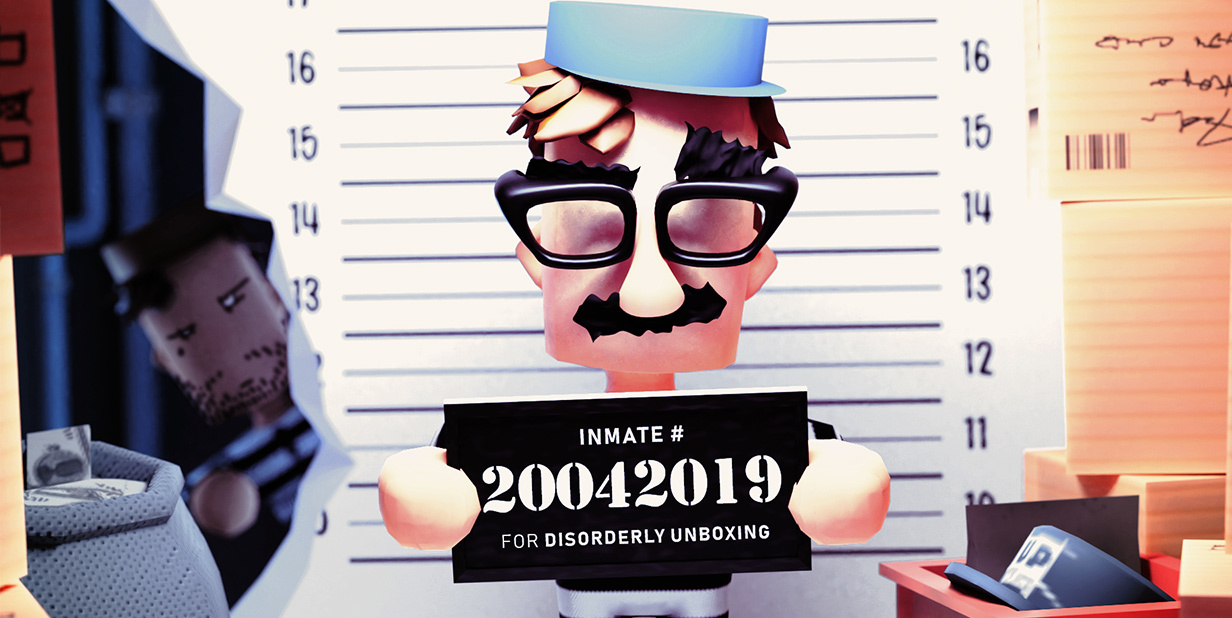 We bribed the Easter bunny to bring you a basket of new content this weekend!
Not only are we releasing a new map for the game, we're also adding a bunch more destruction! You can actually destroy most of the walls in a map now and decide which way is fastest for you and your team.

The map will be published on April 20th and in light of this happy occasion we shaved the price a bit. So let your friends know about UpBreakers and while you're at it, come join our Discord Server to be the first to know about new stuff. We're also beta-testing most of our maps beforehand so you will be able to give us your feedback BEFORE the map is final!

UpDate #3: Prison Map and DESTRUCTION!
UpBreakers - Max Emm
We might have teased our next map here and there. So far, we weren't quite at a point to show you pictures, yet. However, today is the day - time for letting you guys and gals know about our progress!

BREAK OUT THE UPBREAKERS
The UpBreakers behind barred windows - how could it have come to this? Whatever they did (or didn't do) the objective now is to get out of this fustercluck and back to their dayjobs. Contrary to the houses they normally visit, there are no open doors in the pen so the UpBreakers have to do what they do best: wreak chaos and destruction!

INTRODUCING THE D.A.S.H.
The very highly sophisticated and complex engine behind the acronym D.A.S.H. (Destroy Any Structure Handling system) was conceived by our mastermind coder and will be implemented with the next huge content update.
Its sole function: MORE destruction, MORE chaos, MORE fun fun fun!

You can destroy walls in the game already! But right now this feature is limited to certain walls - the level designer has spoken and so it was. The new update will give you much more freedom to choose your own crazy ways. Basically, you could take down the whole map and never deliver a single box. Won't bring you any points, but you know: it's possible.

We really want to make the D.A.S.H. known - the D.A.S.H. has to be worshiped - the D.A.S.H. must be obeyed! So, in the prison map, there is no getting around the D.A.S.H. as there are no paths leading directly to the BOXVAC-4000, no open doors and no windows to simply jump through. Use the D.A.S.H. wisely for it will reward you. With great D.A.S.H. comes great destructibilty. Become one with the D.A.S.H. to finally - and in a deepened voice - say "I'm D.A.S.H.MAN".

WHEN WILL THE UPDATE COME
We're still working on the map. There are assets yet to be forged, bytes to be coded and lights to be built. However, we feel, we're almost there. And to those of you who don't want to wait that long: We still have open spots in our closed beta (sounds contradictory, I know) and you can apply for it by simply heading over to our Discord and reading more about it in the #announcements channel.

Get the Artbook: Beauties Brainfarts
UpBreakers - Max Emm
We planned this for quite a while and today it's finally here: The UpBreakers Artbook!

Since before we even started development in late 2017 we collected quite a number of sketches, artworks, assets and visual concepts. Putting them together and walking down memory lane has been a lot of fun! 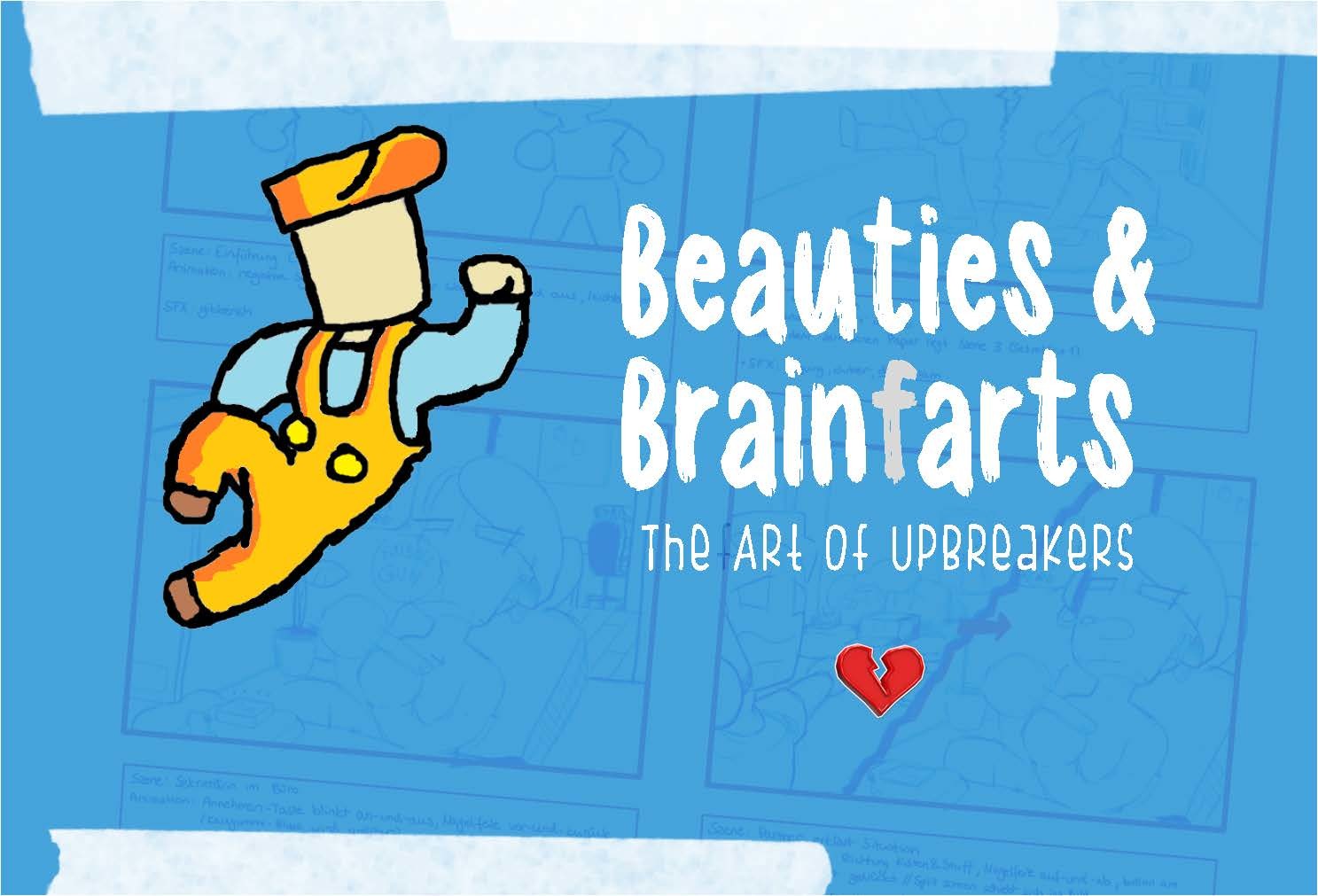 What can you expect from the Artbook

We hope, you'll enjoy the Artbook and look forward to your feedback!

Where to find it
Since Steam doesn't offer an easy way to make DLC files accessibe from your game collection, after you bought the DLC, you'll most likely find it here: C:\Program Files (x86)\Steam\steamapps\common\UpBreakers\Artbook - Beauties and Brainfarts.
Share:

Auto-detecting quality settings (1.0.0-3448716)
UpBreakers - Max Emm
Small but important UpDate: The game choses the optimum quality settings for your system at start-up now. You can still set this to whatever you want, though!

Dust the old conifer and hang up yer socks - Christmas is near! We're always saying how excited we are but today marks a new high of excitement: We have finished our second map and it is out today for you to ransack!

Jacky, Jana, Thomas, Lukas and I have been working on this since we launched UpBreakers mid November and already had a blast play-testing it with Geruhn and his band of streamers to iron out all the kinks and having a lot of fun doing it.

So, what can you expect:

While Santa is nowhere in sight (the elves suspect an evergrowing addiction to battle royal games) his little helpers take matters in their own hands. Pretty soon artistic differences come to light: What color of paper goes with which box? Should the cookies have chocolate or pink sprinkles? Does the snow taste better white or yellow? Angry and bored with the chores of wrapping, building, baking and packing, they decide to make a wager of who would finish loading the sleigh first...

We hope you'll have as much fun as we were having making it!

Merry Christmas to you all!

Charity Event + Giveaway
UpBreakers - Max Emm
We feel honored that UpBreakers will be played during the charity stream for the "Kinderhospitzdienst Karlsruhe" tomorrow!

The event will start at 10 am (CET) to raise money for a good cause so we are greatful for everyone who visits the stream of Gaming Aid and show their support!

If you're lucky, you can even get a free copy of UpBreakers for yourself or a friend during the event, so go check it out!

as we said: minor!

So if you feel, your time has been wasted, enjoy this little web-generated poem:

My love for Upbreakers is so great,
my heart melts for it 'til the dusk of day.
The night downloads when it's away,
waste, update 'til day's dawn.

Its beauty is great,
Wondering mind 'til it sees,
wait is all I do,
While waiting for the moment, for it to say "I do."
Share: 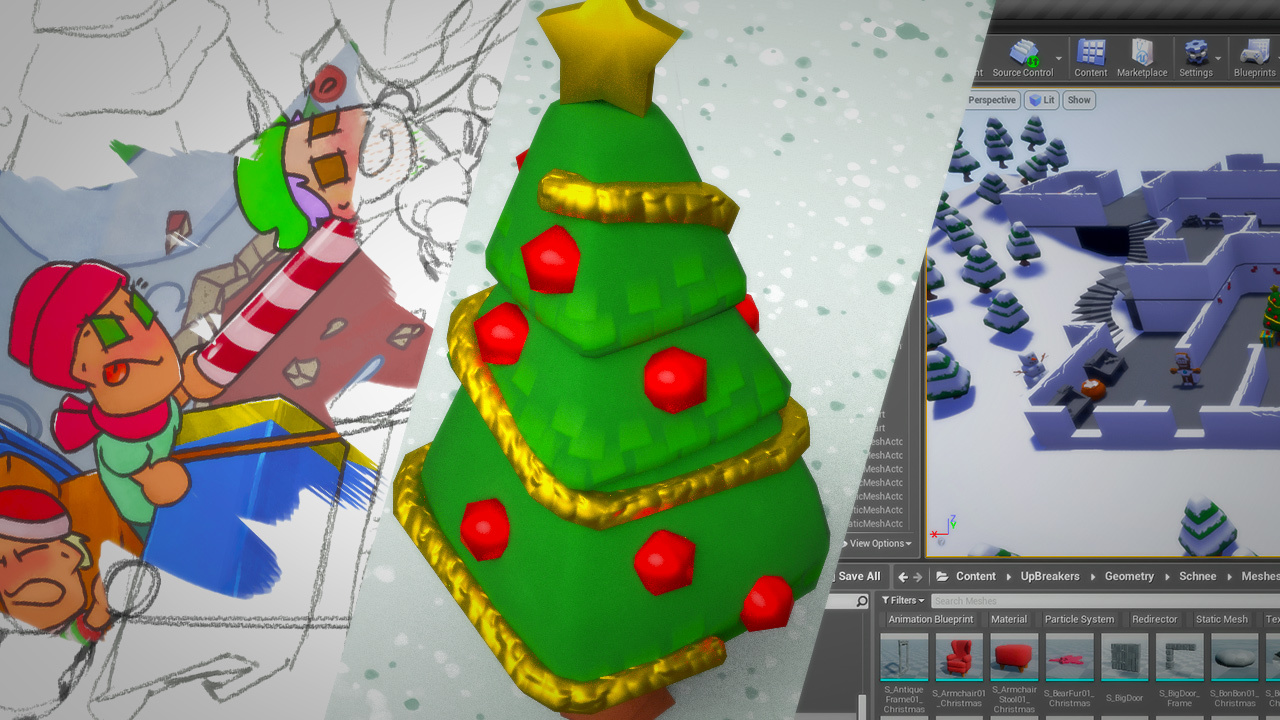 Yes I know, it's a shameless rip-off headline but it perfectly describes what we are working on right now. As we mentioned in our previous update article from last week, we will release a new map!
As everyone around us is slowly getting into the Christmas spirit it feels like a perfect theme for our first content update.

This map keeps us pretty busy right now as Thomas is working on completing the map's layout, placing pickups, managing interior design and, on top, is making the surrounding landscape look like a winter wonderland.
Our interns Jacky and Jana are creating all the nice assets we'll put into the map. Not only are they trying to stay sane navigating through Blender and creating the geometry, they're working on the colorful textures, as well while drawing some nice artwork for the Steam Store presence once we're putting the map live.
For you to be able to actually select the map ingame, Lukas is writing the neccessary lines of code-magic and me, I'm working on the overall look and feel of the map thinking of ways to light and grade it to make it visually pleasing while trying to keep up with all the wonderful people who are having fun with the game and streaming about it. We feel you should definetely check them out and tell them we sent you :) We are so thrilled about all the fun you're having with UpBreakers and want to see more!

In the meantime, check out those videos of great folks really testing their friendships playing UpBreakers:

Update #1 - New Content, WhatsApp Sticker, Playdates
UpBreakers - Max Emm
Here we are after one week of Early Access. And we got quite a bunch of things to talk about. Christmas holidays are around the corner, there is a thing called WhatsApp Stickers, we are confessing known issues of the current version to you, we will add two new languages very soon and we want to play UpBreakers with you!


If you're wondering what we're doing since we released UpBreakers about 1 week ago: The very first thing that we did, of course, was opening a bottle of bubbly - humble as we are ːsteamhappyː The initial buzz passed and we noticed that not many things changed. There's still a bunch of stuff to be done until we can call this game truly finished! So, we sat down together and brainstormed our next steps (the details of which we will devulge to you bit by bit). As a result, one of the first things we will be doing next (and are already working on) is some christmasy content - YAY! 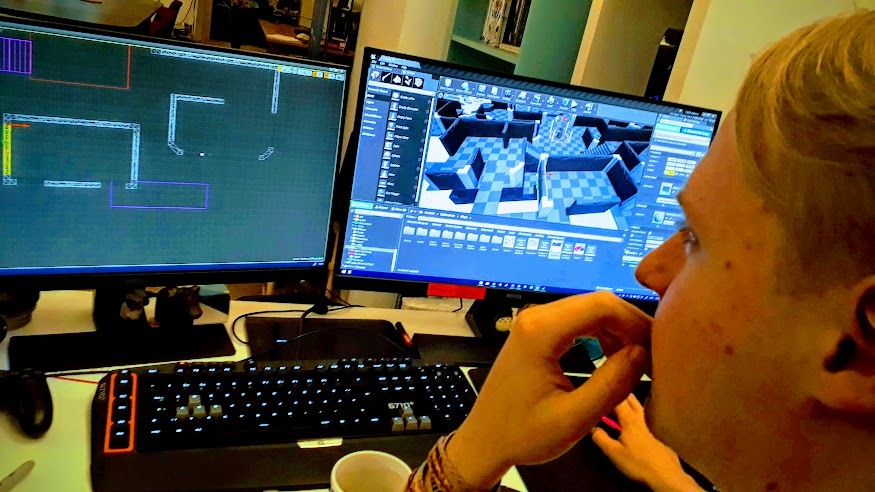 We are working on a map that brings the UpBreakers into the christmas world of Santa's helpers where you find yourself in one of the two fractious elf teams. They once worked together in the same factory but greed and mistrust split them up and made them despise each other.
We plan to have the Christmas map up and running when Steam's winter sale starts and hope you'll still be friends with your loved ones after a round or two! 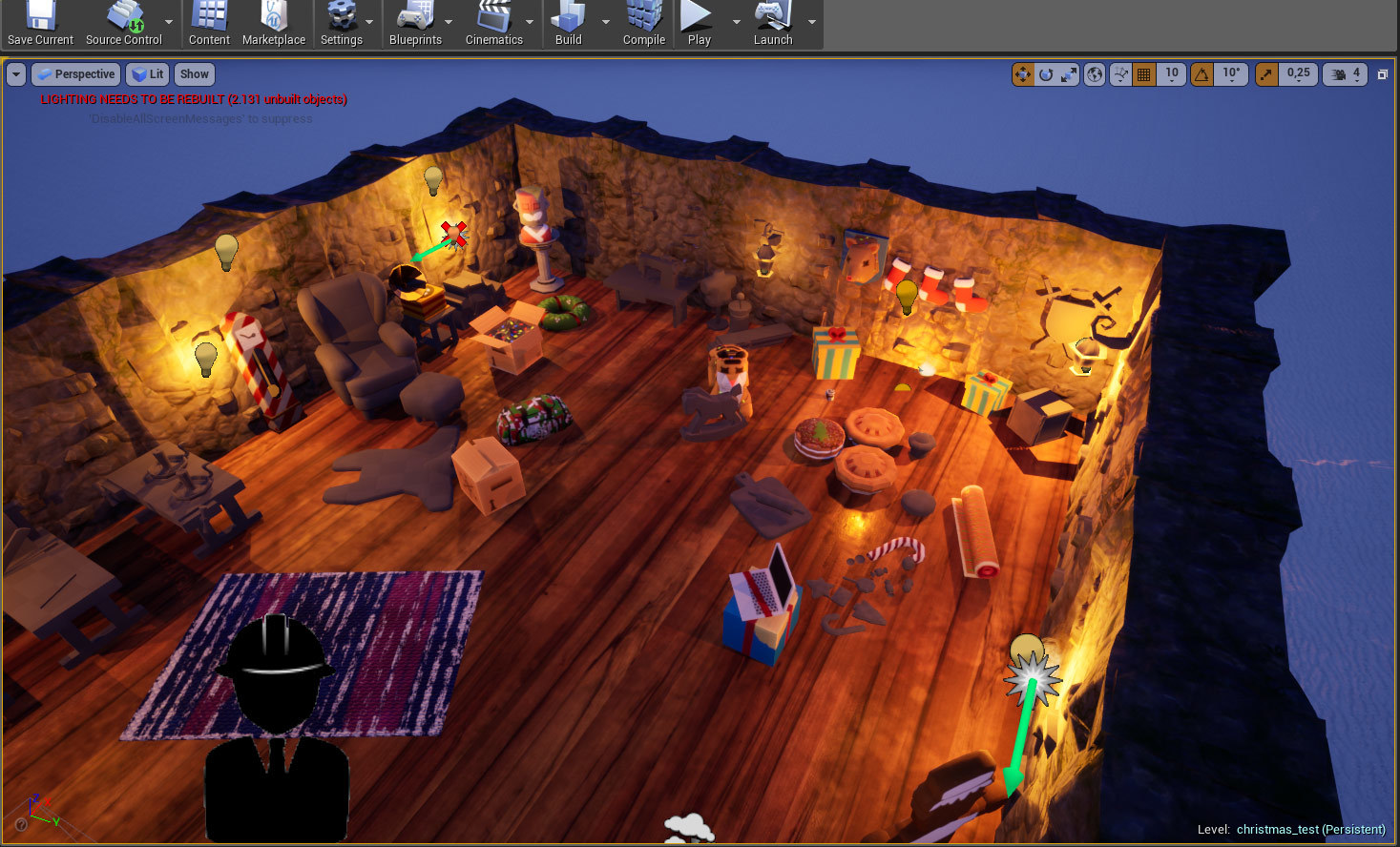 WhatsApp Stickers
WhatsApp Stickers are apparently becoming more and more of a thing now so who would we be not to hop on that hype train and ride it hard *chooo choooo*. If you want to spread some UpBreakers "love" you can download a nice collection of stickers now from the Google Play Store and stick it to your best friends or worst enemies!
Let us know what kind of stickers you're missing from the pack since we want to expand it over time!

Playdates with us, the devs
Yes, we know how multiplayer games work. One needs multiple players... concurrently, ideally. Until UpBreakers has enough of those, we want to offer you to challenge us to a match or two in the meantime!
We will warm up a lobby every week-day at around 5.30 (CET) so feel free to join us there and wreak some havoc! The lobbies can most likely be found under one of the following names: Subpixels, SuperSpaceCat, Max Emm.
For the very rare case of us not being there, please don't despair! Some evenings we might just be out of the office at some fancy champaign and caviar parties with all the big business players.... yes... that's us indies.

Kidding aside, we have some informative stuff, too:

Known Issues
From now on, we provide a list of known issues here in the communities' message board. It might not be complete but that's where you can help us! Should you find issues in the game, feel free to report it right there in the post as a comment!
We will also post a list of planned features very soon!

Translations into Russian and Simplified Chinese
Last but not least: Some nice folks at fiverr supplied us with some neat localisation jobs and we will add simplified Chinese and Russian to the list of available ingame languages very soon!

That's it, folks!
Enjoy your weekend and spread the word of UpBreakers to your friends. Because multiplayer games are so much richer when playing them together ;)
Share: