Chapter IV: From the Inside, now Available + 33% discount!
Between the Stars - The Bullet
Hello everyone!

This update has been being worked on since October, that’s 8 months’ worth of changes, missions, quests, writing, dialogue, voicework and art. We’ve been working non-stop and are extremely proud to present you with this update!


33% Discount
To celebrate this massive update, we’ve decided to put the game on sale at a whopping 33% off! That’s a third off! Take advantage of this sale while it lasts!


Chinese Translation coming soon!
Last but not least, we’ve teamed up with Whisper Games to bring Between the Stars to China! They are diligently working on a Chinese localization for the game, which should be ready this year!

As you can see, we’ve been quite busy, but work isn’t stopping for us just yet, we’ll now start work on the game’s fifth and final chapter!
Share:

The good news is that you too can join in on the Beta phase right now and try out the many new hours of content that we have prepared for you. Please, remember to use the bug report system in-game by hitting the B key.

In order to join the Beta, all you have to do is right click on Between the Stars in your library. Click Properties, Betas and opt into the beta we have there, it’s that simple!

Here is a changelog for the beta's latest build:

Expect the 4th chapter in the coming days!
Share:

Chapter 4 Beta now available!
Between the Stars - The Bullet
Hello everyone!

We've finally finished the fourth chapter (the largest by very far!) of Between the Stars, alongside a host of new changes and additions to existing gameplay.

As this is a very large patch we would like to Beta test it for at least a few weeks in order to gather your feedback prior to releasing this into the wild.

Please understand that this is a BETA release and that there are risk of bugs, errors and crashes. We reccomend you make a backup of your save file just in case. We don't anticipate any large issues but as with any beta, it's better to be safe than sorry.

Besides the bugs and issues you might notice, this Beta build lacks some balancing, polish and a few tweaks that will be incoming in the coming days.

The following is a changelog for this version of the game:

Development Progress
Between the Stars - The Bullet
Hello everyone!

It’s been quite some time since our last update. These months have been very complicated.

As we announced on Discord, we’ve started out the year on a bad foot. At the beginning of January, both me and the other developer of Between the Stars were hospitalized. Besides that, our translator decided to leave the team in the middle of the chapter without any warning. He simply stopped responding and blocked us.

But we are happy to communicate to you that we are completely recovered and we are back on track. The translation is already well underway and next month we plan to implement a large patch in the public beta with the continuation of the third chapter, among other things.


We hope you enjoy what's coming and wanted to thank you for your time and patience.
Share: 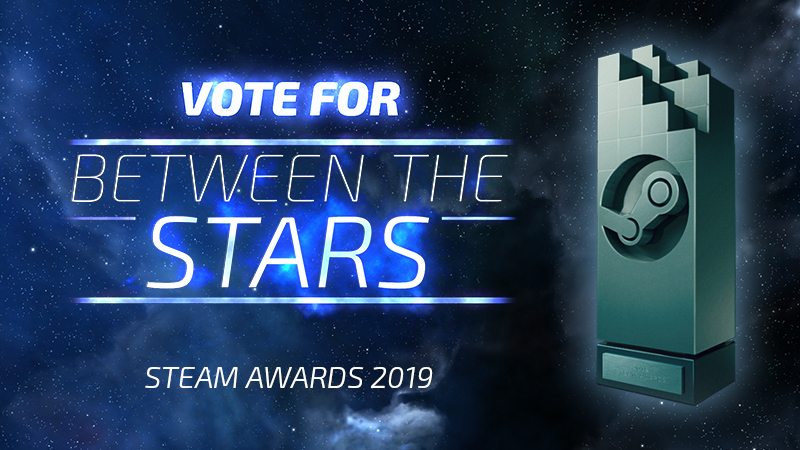 Steam Awards 2019 votes started a few hours ago. It's a great chance for indie games to stand out!

You can now support our game by voting for Between the Stars in the "The Outstanding Story-Rich Game" category.

v0.2.1.0.0 - Loot and Departments Update
Between the Stars - The Bullet
In this update we've modified the loot system, added new salvageable items, and we've upgraded the departments and workshop tabs and inventories.

Now the inventory is divided in three windows in order to upgrade the amount of inventory space and crafting and scrapping is now much more quick and easy. 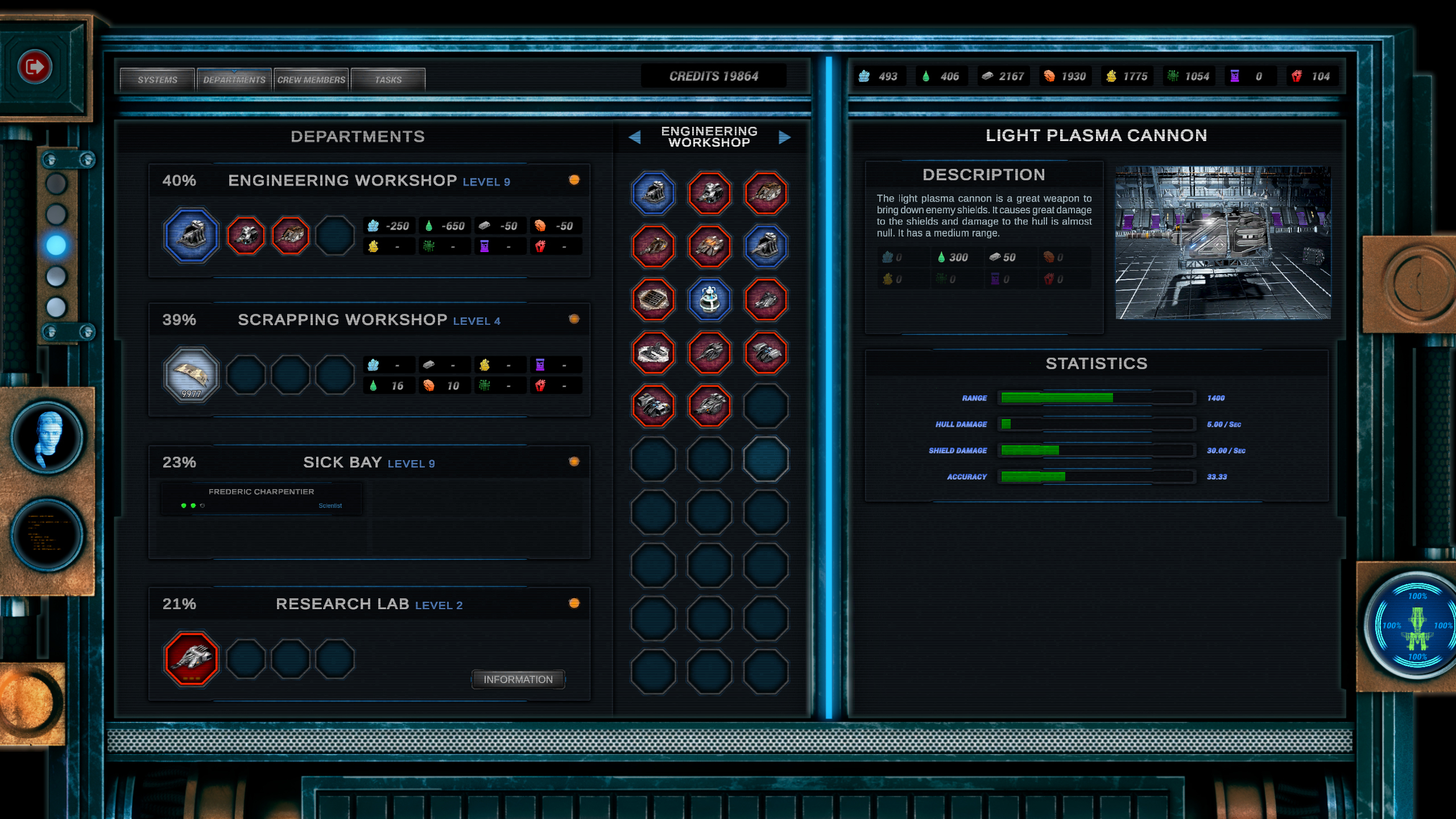 Our plans are to have the next update be based on chapter four of the story, and we hope to have it ready by the end of december on the beta branch.
Share:

Introducing Beta Branch
Between the Stars - The Bullet
A new update is now available on the new beta branch. For this new version we need testers to ensure there are no major errors.

How can you access this beta?
It’s easy, all you have to do is go to your Steam library, right click on Between the Stars, select Properties, and select “Beta -“ in the BETAS tab. The game will update to the latest beta version. 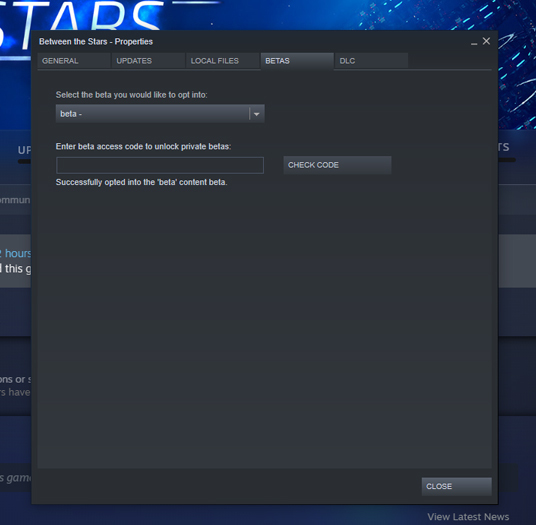 IMPORTANT! Before testing the beta version please make sure to back up your save files. You can find your save game data in the following folder:
C:/Users/YOUR USER/AppData/LocalLow/Isolated Games/Between the Stars/SavedData

These are the changes that our latest BETA version brings:
v0.2.1.0.0b

If you find any errors in the beta version, please, let us know and we will correct them before updating the normal version.

And if you want to form a part of the translation community in order to help translate the game to your language, all you have to do is enter our Discord server and get in touch with us: https://discordapp.com/invite/betweenthestars

Thank you all for participating and helping us to create this wonderful game!
Share:

v0.2.0.9.0
Between the Stars - The Bullet
In this update we've added a crew reserve in order to solve some bugs that people had when having a full party.

In the reserve you can store crew members that are on your ship, but are inactive. This lets you get new crew members even though your active crew is full.