Dark Devotion team wishes you all the best for this new year.

Today we’ve got two good news to share with you.

First of all, we’re glad to announce the Blacksmith working in the Temple created Dark Devotion official Trading Cards. 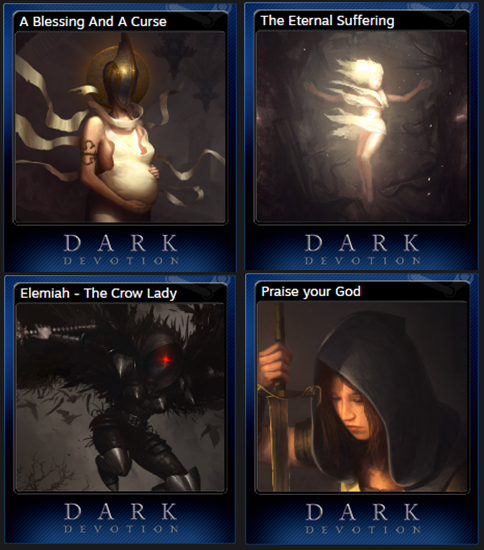 As you know, trading cards drop as you play and can be either traded with friends or crafted into badges to raise your Steam level and unlock benefits to your profile.

Now, as a token of appreciation and to celebrate our freshly crafted trading Cards, Dark Devotion opens its door to newcomers with a 60% sale starting today until tomorrow in the evening.


May the chant guide you through to victory.

2019 is coming to its end. We thank you for your support since Dark Devotion got released this year.

Steam Winter Sale begins today, and it's time for us to announce that Dark Devotion is now 50% off until January 2nd, 2020. 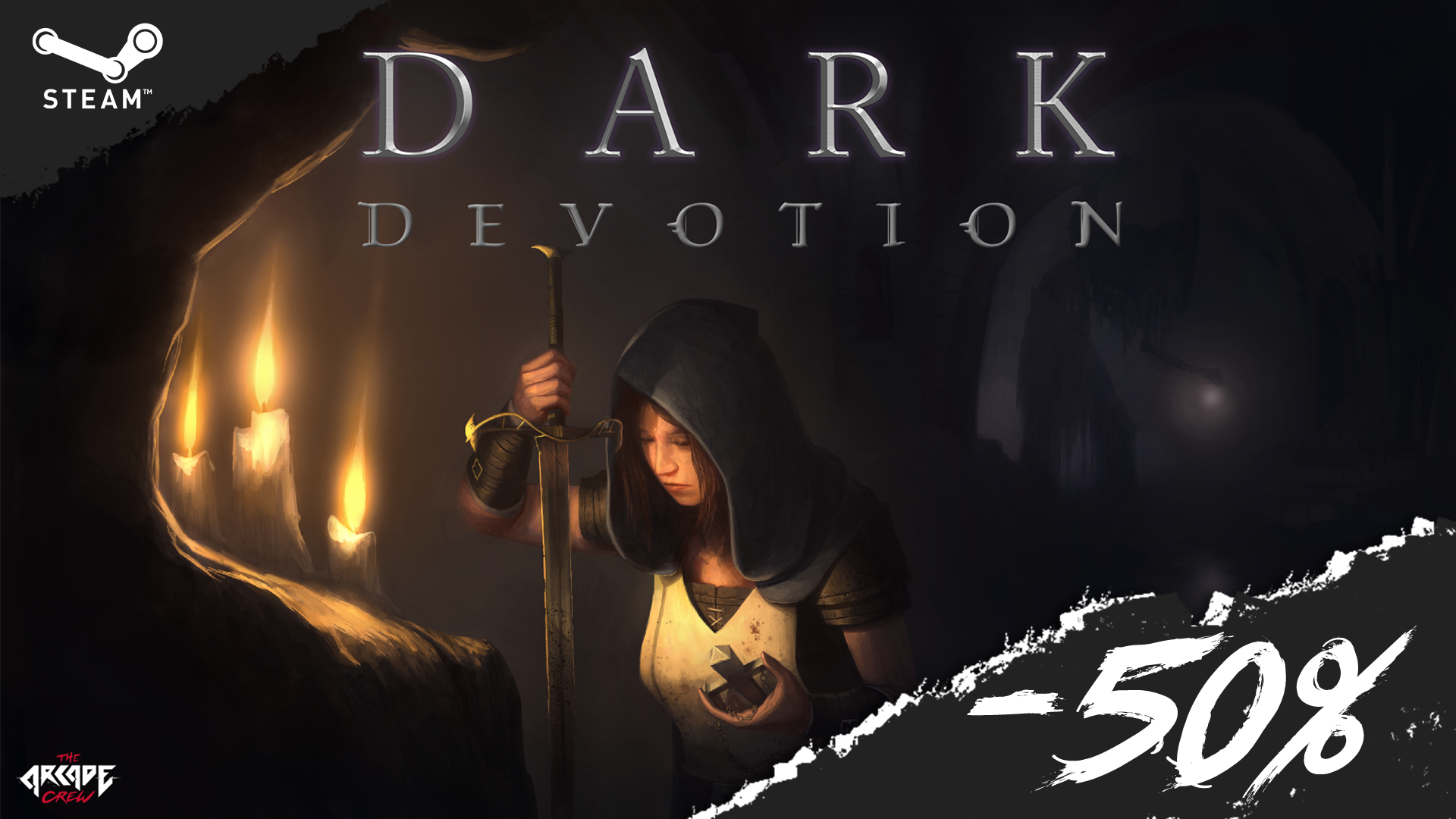 May the chant guide you through your journey into the dark Temple you're about to explore.

The development team thanks you again for your everlasting support since Dark Devotion has been released.

As a token of appreciation, we’re glad to announce that Dark Devotion will be 50% off until today 10 AM PT. 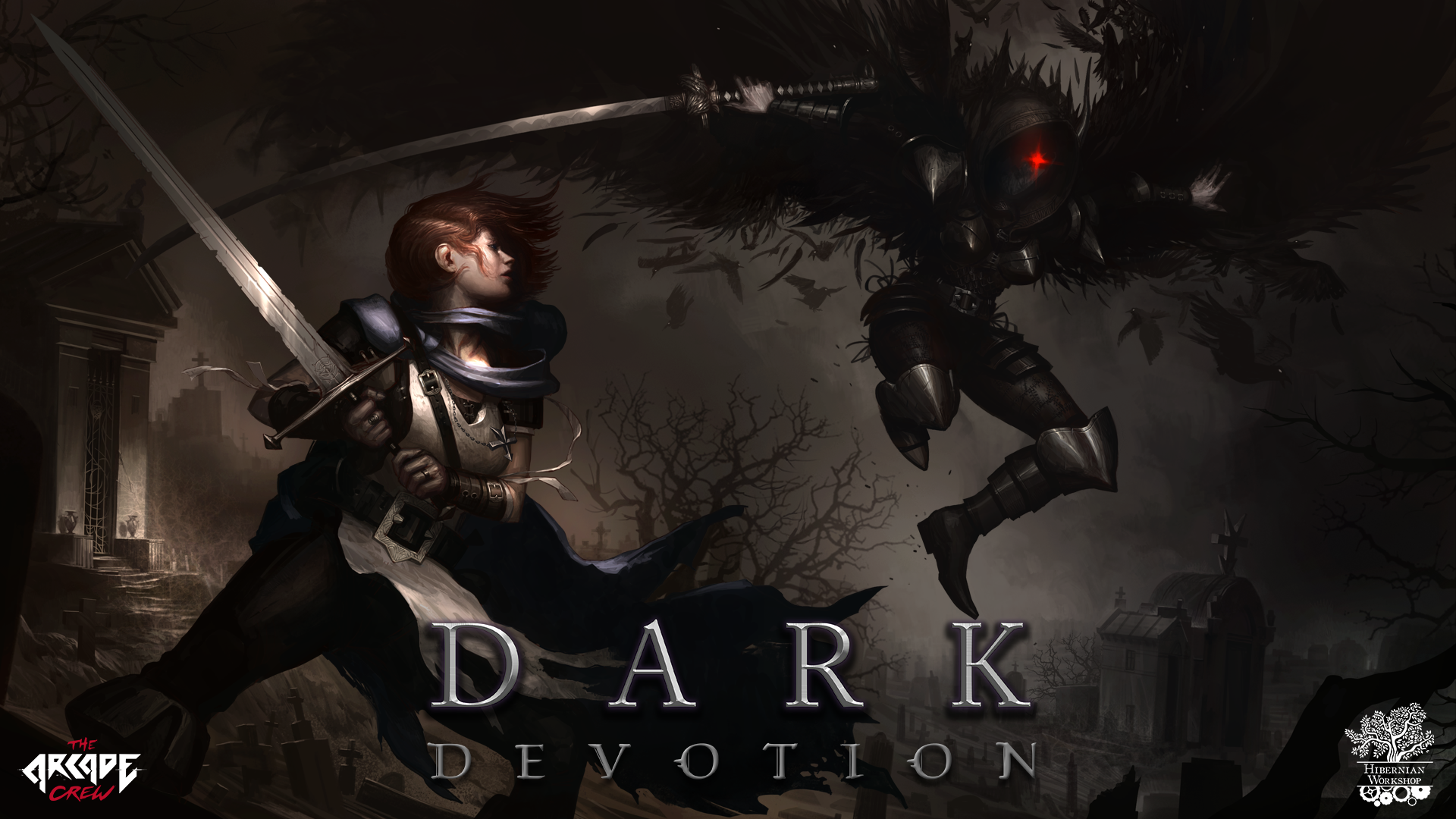 And remember that only the deserving will find virtue in the temple.

Have a safe journey,

Once again, we'd like to thank you all for your continuous support since Dark Devotion release.

We keep working hard on the game and thanks to your feedback. We're now deploying a new update (1.0.43) that fixes some issues you may have encountered.

You will find the detailed patch note below.

On behalf of the whole development team, we’d like to thank you for the everlasting support since Dark Devotion release.

The Steam Summer Sales begins today. And for this occasion, Dark Devotion will be 30% off until the sales ending on July 9th.

Furthermore, we're glad to announce we've just deployed a new update for Dark Devotion that spans several enhancements to the existing gameplay and some issues reported by the players. Please check out the changelog detailed below.

- You can now see the tablets you’ve already activated on the map
- Purchased blessings are now automatically activated
- Room 8, the path to Adonias is now less obvious, inducing new players to go towards Hezek first.
- Room 8 the templar's corpse gives you a 2H pattern.
- Base brightness from 0 to +5 to improve the game experience.
- Camera movement has been improved to avoid motion sickness
- Disease 17 (rusty armor) rebalanced
- Added an icon on the map showing where the hero currently is
- Speaking to Ariuk now triggers the quest with Gabrielle on the first dialog.
- Using a poultice now also heals bleeding disease
- Nerfed the succubus sword
- Changed the weapon in room 91 in front of the boss door
- Nekosh demon is a bit more aggressive
- Explosive arrows now explode much faster
- Chimeria’s HP up from 2400 to 3000
- Elinor and Aureus’ HP up from 1300 to 1600 for each boss
- Ritualist’s HP up from 3000 to 4000
- Nerfed the scrap merchant blessing from 100% to 25% chance every kill
- Basilius' guide book can now be used only 4 times in each room

Several visual fixes have been implemented. The most notable listed below:

- Gaining health with bloodlust blessing can no longer cause anesthesia disease
- Blacksmith’s weapon can no longer be visible in both hands.
- Detection of boss-killing quests improved
- Blood traps in world 3 now properly reset upon player’s death
- All First One’s attacks now hit the character properly
- Some fire weapons were not burning logs in world 2
- Fixed descriptions for boss weapons in the blacksmith
- The Martyr now blocks arrows
- Removed loots from Adonias’ minions
- Cosmology & Chiromancy’s hitbox now matches the visual effect
- Redemption curse no longer triggers Last Breath curse
- Chiromancy’saracter can no longer be cursed during exploration of world 4
- The quest to kill the Mysterious Entity (world 2) can no longer be completed after killing the First One
- Fixed blocker during Dicecaster escort
- Fixed quests markers location for World 2 and 3 when opening the map
- Fixed World 3’s Elites HP
Share:

Oh, the many things I cannot tell you, readers! They are many, and they are things. One thing I can tell you is that argh, howl, yes, I am indeed working on the enormous pile of hundreds upon hundreds of indie games that are surely aiming to destroy me. The second thing is that it’s time once more for the world famous round-up of the best indie games on Steam that, round here, we call Unknown Pleasures.

END_OF_DOCUMENT_TOKEN_TO_BE_REPLACED

First of all, we’d like to thank you for the feedback shared since Dark Devotion release.

The development team has been working hard on some issues reported by the players ever since. We’re now ready to deploy our first hotfix to correct them.

You will find the changelog detailed below :

With steam controller support active, the title will work with controllers.
Please note that the layout displayed will be always Xbox, even with the PS4 controller plugged. Moreover, the stick sensitivity is no longer managed by the title settings but by Steam Settings (please check out user configuration).

- Fixed performance issues in the library

- Some text and lore fixes.

Thank you all for sharing your feedback with us! After carefully investigating this problem, we did a manipulation that should have fixed the issue. In order for it to be active, you must:

This should allow you to play Dark Devotion without problem.

In the case the issue is still present after restarting Steam several times, there is an individual manipulation that can also fix the problem. Here are the steps to follow:

This should fix the issue and allow you to use your controller as well.


Thank you all again very much for your patience and understanding.

First of, thank you all for being so active for the release of Dark Devotion. The whole team is really excited to see you all so supportive. Thank you!

We got several reports regarding controllers not working with the game. We are deeply sorry if you are encountering this issue and we will do our best to fix it as soon as possible.

It seams that this issue may be hardware related. If you are encountering this issue, please let us know in the comment section bellow what controller do you have so we can investigate further and work on a fix.

Could you also please let us know if you have an Antivirus software installed and if so, which one?

Finally, could you please let us know if the "xinput1_3.dll" file is present in the game's folder ("C:\Program Files (x86)\Steam\steamapps\common\Dark Devotion")?

All this info will help us greatly in understanding where the issue may come from.

Developer Hibernian Workshop has announced that Dark Devotion, its intriguing (and gloomily attractive) side-scrolling action-RPG, will be making its way to PC, PlayStation 4, and Switch "early" this year.

Dark Devotion first came to light back in 2017, when it successfully raised 31,796 Euros (around 28,690) on Kickstarter. It casts players as a Templar, sent to explore the depths of a mysterious, "unforgiving" temple in search of answers "that will challenge your very existence."

In some respects - it's a moody, Dark-Souls-esque rogue-like, with a tight pixel art aesthetic - it's all awfully familiar. However, Dark Devotion has a few tricks up its sleeve that will hopefully set it apart from its peers. For starters, its four large worlds are entirely hand-crafted (no procedural generation here), and there's a strong emphasis on story and meaty, stamina-based combat - featuring various weapons, armour, and relics - with a particular focus on diverse boss fights.