STEAM WINTER SALE: FROG X BIRD is 50% OFF!
FROG X BIRD - ATTACK MOUNTAIN
Been waiting for a great deal on FROG X BIRD before diving in? Now's your chance!

FROG X BIRD is a hopping 50% OFF through the Steam Winter Sale! Given that you'll get every expansion for free once you own the game, there's never been a better time to grab it!

Looking for a great gift for your friends, your kids, or just someone you know that loves a good local multiplayer game that they can sit around with their pals and play for hours on end? FROG X BIRD makes a killer gift for all ages!

May your holidays soar high as a Rufflebeak! See you in 2018.

STEAMLINK: HOW TO SET UP YOUR CONTROLLER
FROG X BIRD - ATTACK MOUNTAIN
Do you use Steamlink to play FROG X BIRD on your TV? It requires a teeny bit of setup to get your XBOX gamepad working. Follow this handy guide to find out how!

STEP ONE
First, set your default controller configuration to "Gamepad":

STEP THREE
Use the following settings: 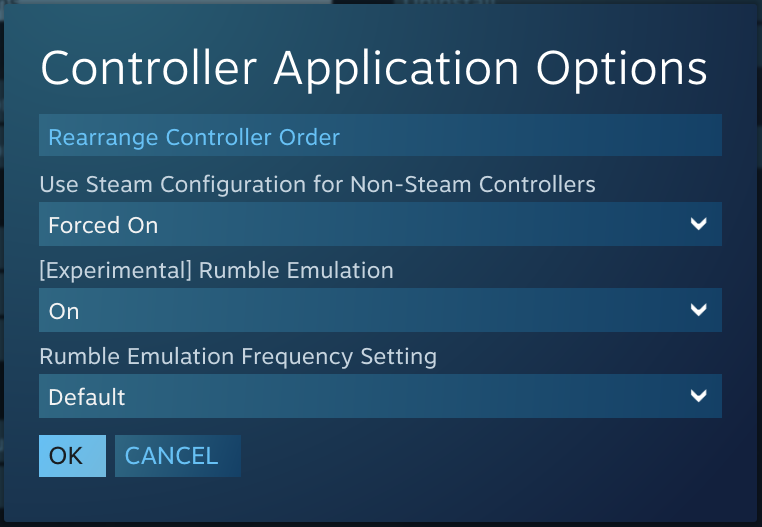 Do these things, and you'll be good to go! Happy flappin'!

FROG X BIRD VERSION 1.01 IS LIVE!
FROG X BIRD - ATTACK MOUNTAIN
Hello to all of our pals out there! Hope your week is going great!

As we mentioned in last week's FROG X BIRD primer, we've dropped a small update for the game this morning that improves menu navigation for keyboard users.
XBOX 360 controllers are still the premier way to play FROG X BIRD, and are strongly recommended!

That's all for today! Thanks for reading, and HAPPY FLAPPIN'! 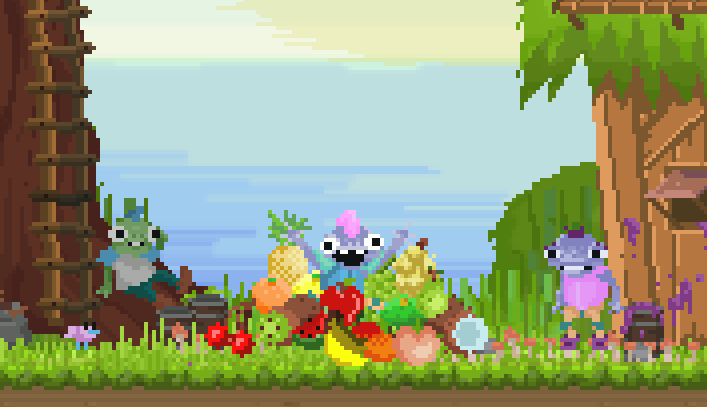 HOP HOP HOORAY, IT'S FROG X BIRD LAUNCH DAY - and we're off to a smooth start! We've been getting messages from allll over the wide world of the internet since early this morning, and want to thank you all for your support. We're a small team with no major capital to speak of; sheer love and passion for making fun video games for people to play is what fuels us. So when you buy one of our games, know you're supporting a small boots-to-the-ground dev team that is always in your corner.

This announcement will have a bunch of neat and good stuff to know: answers to a few frequently asked questions, information on controls, and the basic gameplay behind FROG X BIRD for those that might be eyeing the game but haven't bought it yet. Let's dive right in!

If you're using a non-360 gamepad, head over to the OPTIONS menu using your keyboard. Here you'll find the JOYSTICK option. Turning this on will enable any non-360 gamepads connected to your PC. If any players are using a 360 controller, this option will automatically be set to ON, and any player that doesn't have a controller or non 360-gamepad plugged in will default to keyboard. 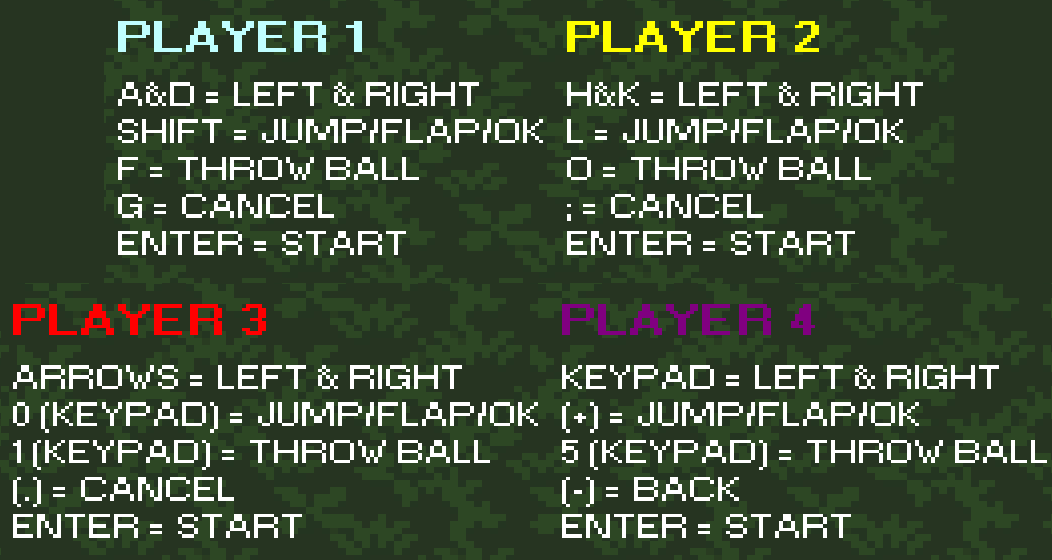 KEYBOARD CLARIFICATION
We want to provide an update on a minor keyboard issue a few keen players have already contacted us about. Version 1.01 will release in a few days, and provides a small but important usability tweak for keyboard-only users - the ability to use ENTER to make your selections on the menus, instead of player's individual 'OK' buttons. Until then, if you're a keyboard user, please use the key for 'OK' listed above for any player to navigate menus.

HOW DO I PLAY?
FROG X BIRD is a super accessible game that anyone can play - just pick up a controller or sit down at your keyboard and you and your friends will be having fun in no time! If you already own the game, everything you need to know is located in the 'HOW TO PLAY' screen, reachable via the main menu. The 'HOW TO PLAY' screen will walk you through the basics and give you access to the controls listed above in case you need a refresher.

For those that don't have the game (what are you waiting for?!), the rules are simple:
Each mode has different rules - LEAF AWAY, for example, has the players battling over a leaf, which they get points for holding on to and can only be dropped when they're KO'd. RIBBASKETBALL - a popular mode at many of the conventions we showed the game at - removes KOs altogether and has you shooting hoops to score points! There are four modes in total, with more to come in the game's various expansion packs.

That's all you need to know! Lots of game modes and various arenas with different pros and cons await you, and the possibilities for bird-on-frog-on-bird combat are many!

GETTING YOUR FEATHERS RUFFLED - YOUR FIRST FROG X BIRD MATCH
If you've just got the game and you and your friends want to get a feel for the 'core' FROG X BIRD experience, here are some ideal settings that will get you right into the action:
That's all for now! Now get out there and start FROGGIN' & FLAPPIN' IT UP! Good luck, and if you need anything (or just wanna say 'what's up'), let us know! We're here to help.

FROG X BIRD PRE-LAUNCH UPDATE: DLC, PRICING, LAUNCH DISCOUNT
FROG X BIRD - ATTACK MOUNTAIN
Hello friends! We hope you’re all super excited to cram onto the couch with your buds and play FROG X BIRD when it launches on Steam tomorrow. We're coming out just in time for Thanksgiving, which means after you're done with the family dinner, you've got an awesome game to play that the entire family can get in on and enjoy!

We have a couple of announcements to make today about the future of the game:

And not only that: we’re happy to announce that anyone planning on buying FROG X BIRD when it releases tomorrow will enjoy a 10% launch discount! This discount will be available to all Steam users through the end of the upcoming Steam Autumn Sale.

EXPANSION INFO
FROG X BIRD will see 3 major content expansions over the next year, with each one adding new characters, exciting multiplayer arenas, and dynamic game modes! Ultimately, the game will cap out at 14 playable characters, 8 arenas, and 8 game modes, for endless FROG X BIRD fun.

There will also be several minor content expansions sprinkled in between these, which won’t be as robust but will add more to the experience in smaller doses.

EXPANSION PRICING & EARLY ADOPTERS
You might be wondering what our plan is as far as DLC pricing goes – but we’re here to tell you to put your wallet away, because once you own FROG X BIRD, you get every single expansion and game update for free! There ain’t no nickel & diming going on here - here at ATTACK MOUNTAIN, we want you to ‘have fun without spendin’ a ton’!

You’ll still want to get in early, though; the price of the game will increase by a few bucks with every major expansion released, capping out at a still-reasonable price on the final expansion. This means early adopters will spend less to get flappin’ – so grab FROG X BIRD early and bask in the savings!

That's all for today's update - we'll see you in the world of FROG X BIRD tomorrow!

Having family over? FROG X BIRD is the ultimate party game and the best thing you can play with your family while you're digesting all of that turkey.

(Just don't tell the Rufflebeaks about that 'turkey' part.)
Share: