Dedicated Server Fixes
Pretty hefty fix for dedicated servers in this update. There was an initialization error that caused a lot of problems for devices on dedicated servers. Good example is that Logic Units didn't initialize correctly previously, whereas now they do. There are potentially a lot of device related fixes on the dedicated server associated with this fix.

Active Vent Loading Issues Fix
Active vents were not correctly being serialized. It meant to get them working on a reload you sometimes had to toggle them on and off. Now you will need to do this once more, but from the next load they will be saved properly with their settings.

Colorable LED displays
You can change the color of an LED display with Logic Writers. The display "mode" is the color, just like the LED light itself. Change the mode and the color will change.

Cable Analyzer
This little device can be placed on cables, and provides data about the Actual, Required, and Potential watts of the cable it is on. This is really useful to use with the logic system instead of having to read these values from the power controller.

Consolidated Patch Notes v0.1.1078.5476
Stationeers - rocket2guns
Happy Holidays! No content in this update, just some much needed bug fixes. Most of these come from really good bug reports via the discord - so thank you to everyone for helping us find the bugs. There is still plenty to do, and we'll have more updates coming out over the holidays.

Focus over the next few weeks will continue to be bug fixes to get the game more stable, then we will look at some more content.

Recycling
Now you can pass your waste products through a recycler to regain some of the components back. These will come out as generic mixes of reagents, that you generally need to pass back through the centrifuge to convert into their component parts.

As always, you can connect the recycler up to other machines using chutes.

Power Rework
There were a lot of bugs with the electricity system. This has been reworked. Previously APCs, Batteries, and Transformers did not work well together but their behavior should now be much more consistent. Two batteries connected to a solid generator will now each take 50% of the provided power.

Watch out! Batteries will take/give as much energy as they can - but they will blow wires in the process. 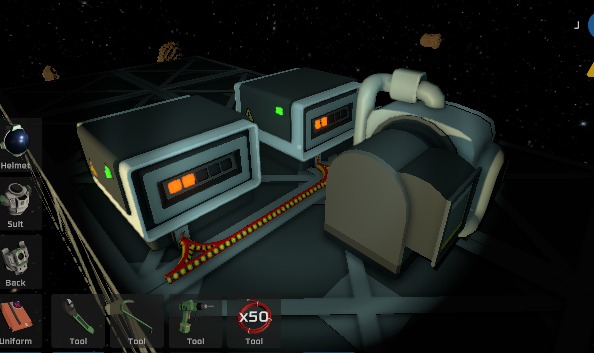 Bugfixing
As with all our previous updates, the focus has continued to be bugfixing so there is a lot to see below. We are still working on a couple more serious dedicated server bugs, but we did manage to increase their stability and also the ability to connect much easier.

We have even more fixes now to thermodynamics, and some other weird edge cases (such as put an open canister in your waste slot). Check out the changelog below for full details.

Connection Bugfixing
Today we focused on putting together many fixes that we had been working on to help players joining large worlds and servers with higher latency. Two key fixes are in this build: no requirement to have all world chunks on game load, and room checking on load/save to reduce junk in save files.

These two things should address some of the more serious problems players were having connecting to games. Additionally, an old voice command still existed in the game that would disconnect players (even players in single player!) this was the primary cause of the "kick back to menu" that players were experiencing.

So this update should give many players a pretty big bump in stability - but as always we need to test and confirm this.

Logic unit tweaks
We also did some work with logic units. There is now a button, and a new switch, that can be used. We added some commands to the Math unit, and made a single input math unit capable of doing math operations such as ceil, floor, and more.

Already players have been able to create some pretty cool systems - such as solar auto trackers, load balancers, and much more!

Batch Writers
So one of the big problems was getting lots of devices to change, such as solars. Now there is a Batch Writer that will write a value (say vertical percent for a solar, or setting for a transformer, or On state for a light) to all of a selected type.

Here you can see an example of using this to make a light switch!

New ore deposit models
We have a few of the new ore models in, not all, but we prioritized ones that looked very similar to other ones. We'll be continuing to tweak these, as well as the ore and ingot models, as we go.

LED displays
Use these as part of the logic system to display values you've created.

Important: Note that the solar logic values have changed. Logic systems may need to be updated to work with the new values, which make more sense.

More Server Browser options
Right click to bring these up.

Logic Units
We heard you! Stationeers have been seeking to automate as much of their stations as possible, and we've had a number of issues with the logic motherboard system. This system was very UI heavy, making it difficult to do, and it caused numerous performance issues.

This update has a first pass of a logic unit system allowing you to build computer controls within the game.

You can build some really complicated stuff but when using these please back up your saves as there are some potential bugs that could brick your save with them!

Fixed a few major issues. Specifically the road flares being outside of crates (as well as a few other items) for clients. Clients unable to drag things properly, and much more. Also a quick first pass on some usability improvements, in the form of extended tooltips.

Extended Tooltips for Construction
New players do really struggle for now so hopefully these help. Context sensitive information during construction. These are toggleable in the settings menu if you want your UI cleaner.

Keymapping for Status Indicators
A common problem was players doing the tutorial and sitting in the seat. And being in the seat forever. We've now added a status indicator for "being in a slot" and also include the current keybind for altering that status state. This also applies to internals, and to your jetpack.

Daylight Sensor reports Sun Angle
You can use the daylight sensor to get the suns angle. This is accessable to the logic motherboard, on the computer. Use this with logic conditions too more easily control solars. 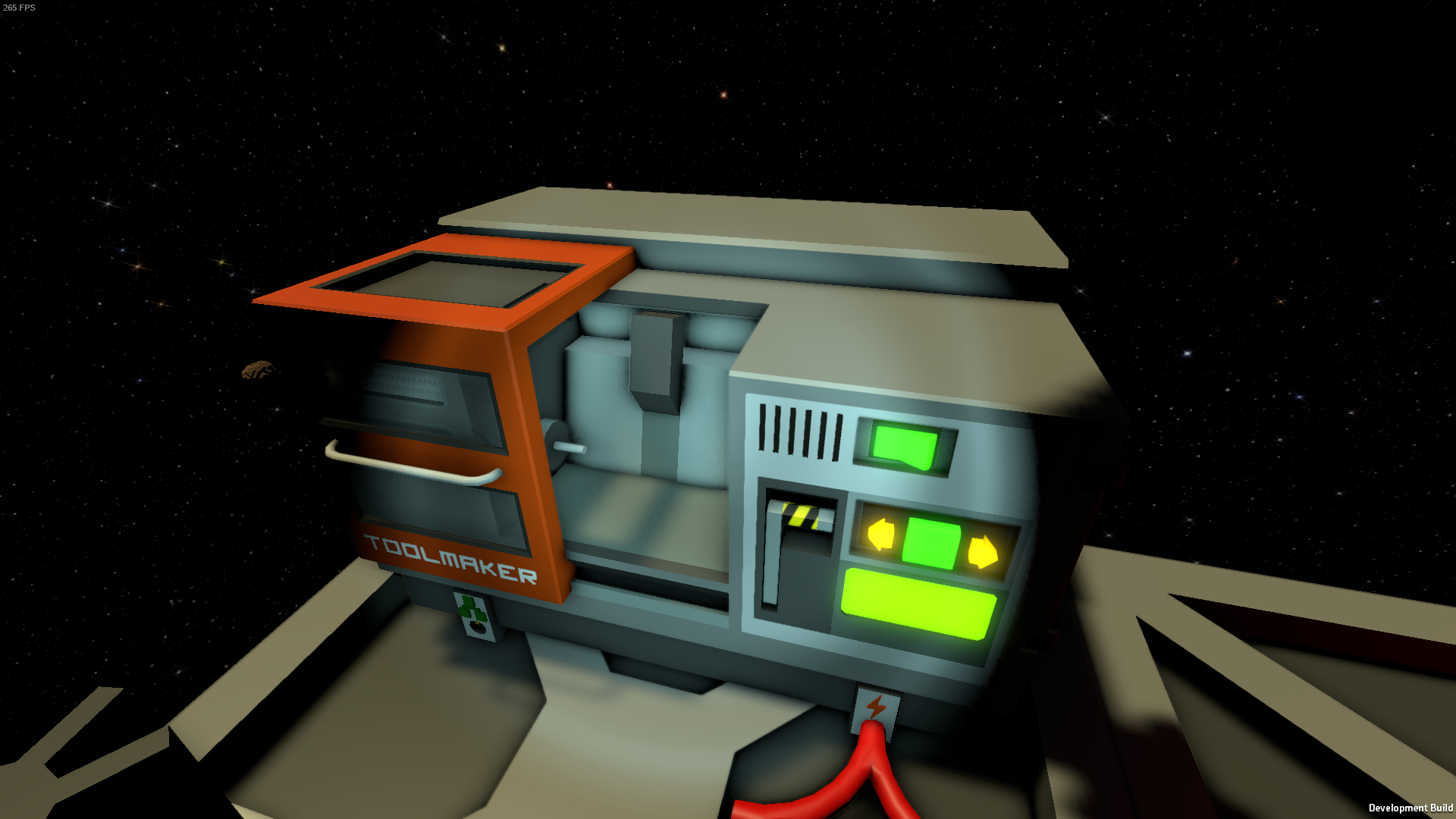 Labeller
Oh and also the new labeller, which is a powered tool that allows you rename devices, anything draggable, and tools. 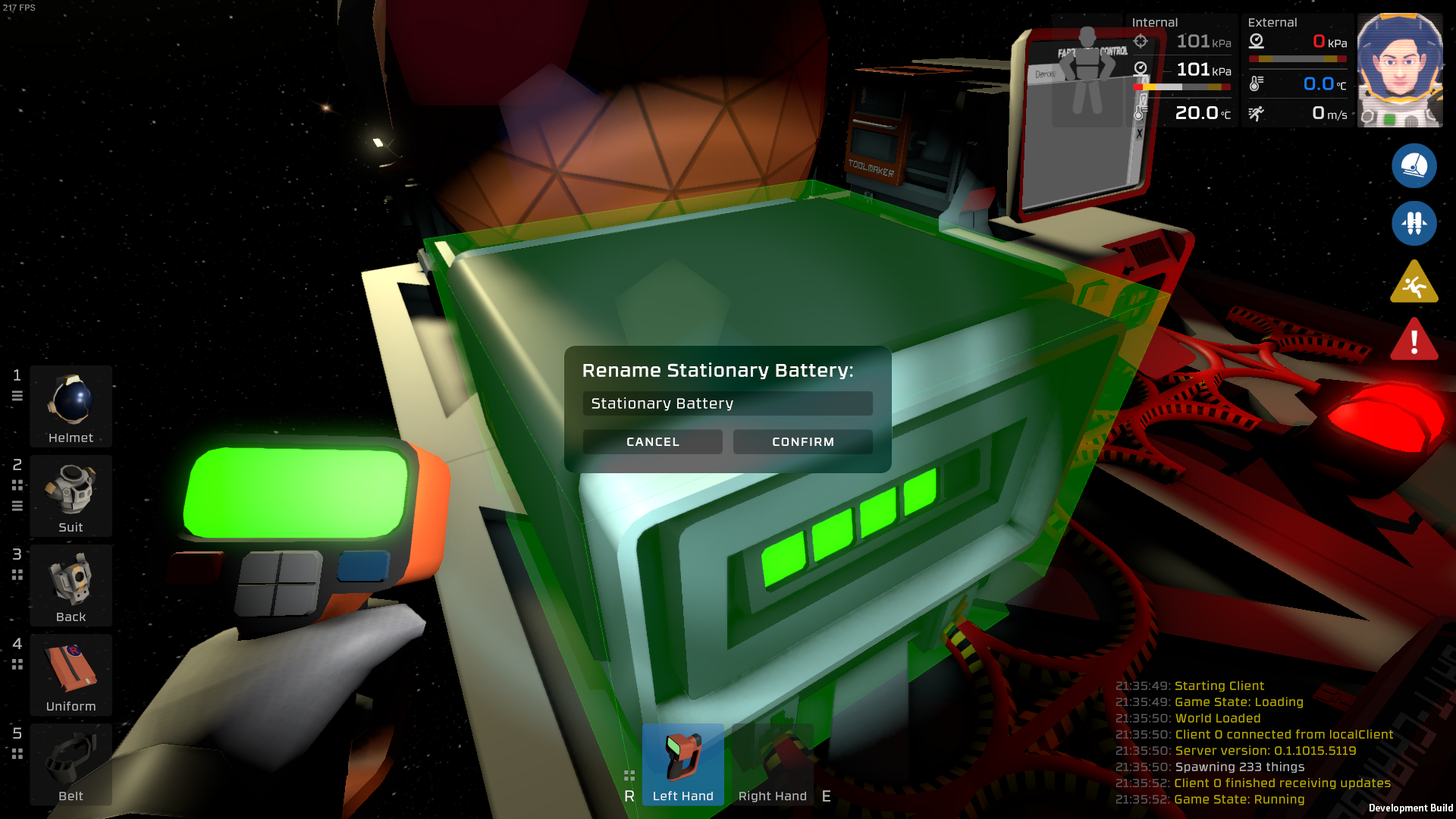 Multiplayer Browser updates
Lots of additions for sorting, filtering, to find your game much easier. 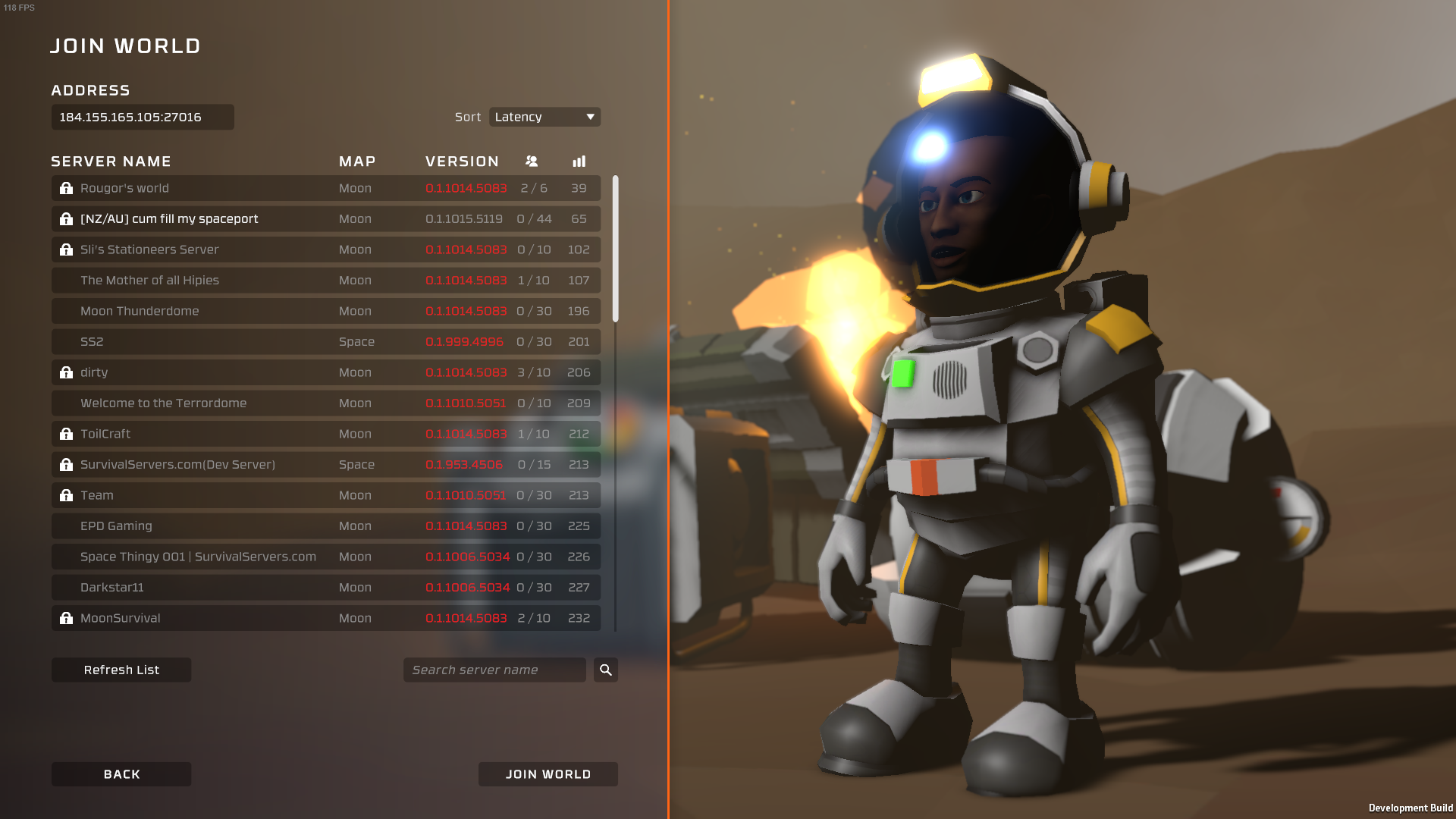 New Starter Crate
A third starter crate now spawns, and gives you some road flares, the new tracking beacon, and some paint cans so you can, well, paint things. 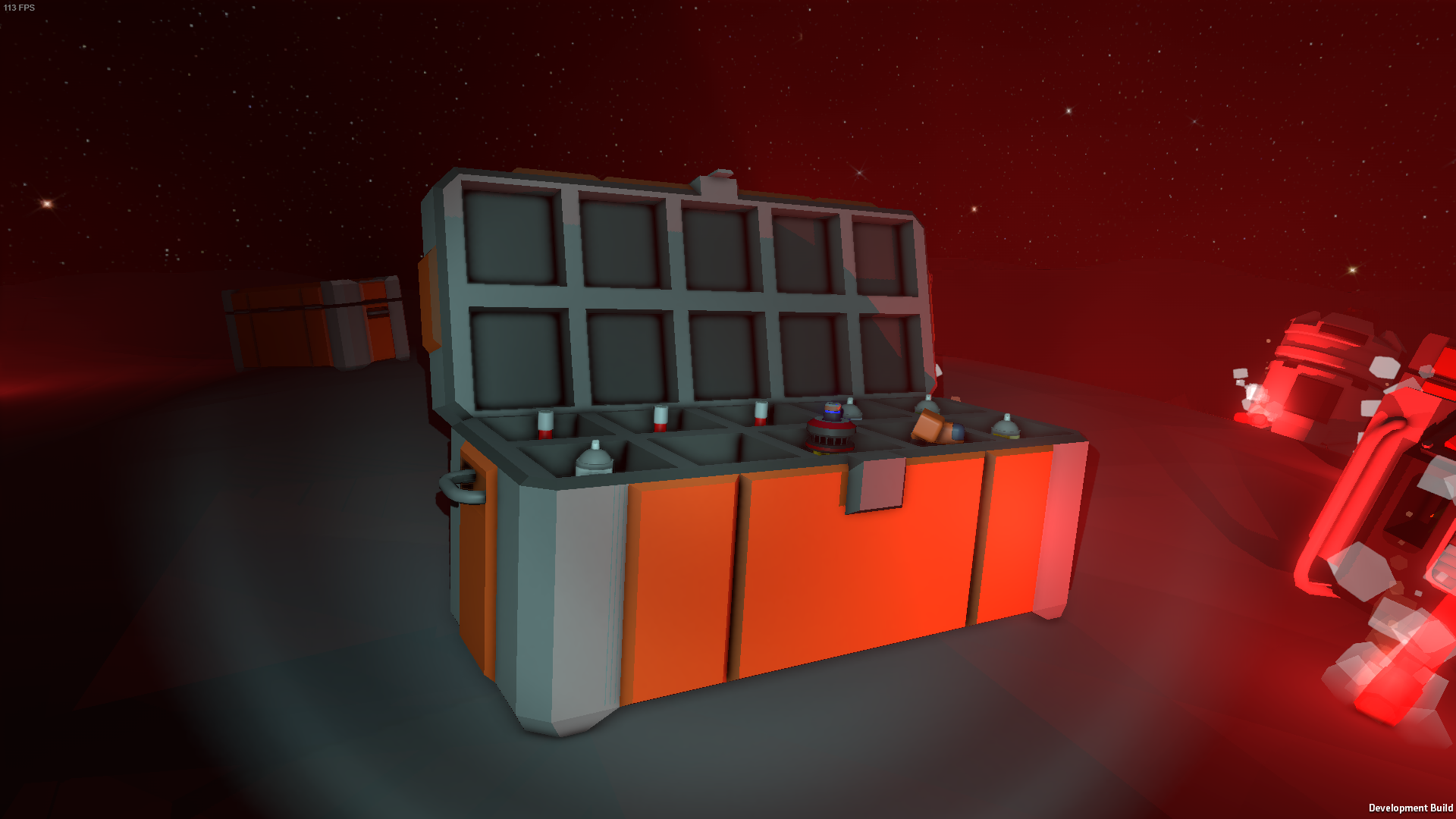 Consolidated Patch Notes v0.1.1014.5083
Stationeers - rocket2guns
Here is the consolidated patch notes for the updates from yesterday (release) until today. There will be an additional update later today as well, which will include some new content! Please keep the bug reports coming.

Launch and updates!
Stationeers - rocket2guns
Well, yesterday was a busy day for our team! Was exciting to launch the game. One of the challenges of developing a game is that the longer a game develops, the less opportunity you to change it because reworking major systems takes time away from finishing the game. If you develop the game in secret, as people used to, it's very easy to end up with a very bad game or one that missed great opportunities. This is because, as a developer, you will never see a game the same as your players.

So Early Access is a brutal, but important, step in us making Stationeers the game we want.

We've already pushed through several hotfixes to address issues we've found, and the patch notes can be found in the main game menu. We're going to release at least one more patch today. And will keep hotfixing the issues as they come up!

Content wise, today I'm going to see if I can get Beacons and a replacement Labeller model in game.