The Bloody Shooters Bundle is LIVE
BUTCHER - bartosz.wnuk
Is your blood-thirst still not satisfied? Don’t worry! By upgrading to the Bloody Shooters Bundle, you can spill even more! Get a great deal on Lichtspeer to slay hordes of mythical monsters and paint the landscape red!The gory and raw game bundle is here! A great chance to upgrade your game library with the most murderous games we’ve ever released!

LICHTSPEER is an action arcade lightspear-throwing simulator based in an Ancient Germanic Future. Co-op mode for 2 players included!
Grab your lightspear, become a Germonaut, and traverse lands straight out of Germanic myths. Survive with style and expand your powers to fight for the glory and amusement of the almighty Gods.
AIM. SHOOT. KILL. DIE. THE LICHTGODS DEMAND IT. This is LICHTSPEER.

It's been quite some time since the last update, so we decided to let you know about 2 things that have been recently going on with BUTCHER. 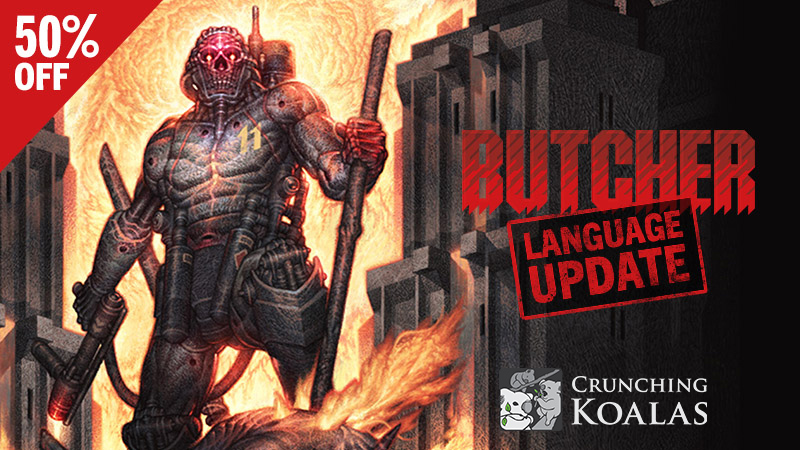 Firstly - the game is now being handled by Crunching Koalas, a publishing studio responsible for porting and bringing BUTCHER to consoles. The guys at Transhuman Design were pretty happy about our work, so they decided to trust us even more and hand the PC version of the game over to us. Not much will change, maybe besides you seeing BUTCHER more often, but if you ever wanted to contact us about the game, feel free to:

Secondly - we decided to update the game and add some new languages! Our fast-paced blood-soaked love letter to the classics of the genre is now available in:
To celebrate the update, we also decided to cut the price of the game in half, for the next 7 days, so don't hesitate and get it right now!

Official Reveal
We're happy to announce that we're making a new gory reverse horror game, in which you assume the role of an amorphous alien being. Use your unique otherworldly abilities to your advantage and hunt down your prey!

Official Reveal
We're happy to announce that we're making a new gory reverse horror game, in which you assume the role of an amorphous alien being. Use your unique otherworldly abilities to your advantage and hunt down your prey!

What s it called in movies, I asked my collegues this evening, when a scientist sees a big alien or a monster, and all they can do is say how beautiful it is before they are eaten to bits?

Well, you see this disgusting crimson abomination of bloody tendrils in monster videogame Carrion? I admire it. END_OF_DOCUMENT_TOKEN_TO_BE_REPLACED

Now you can unleash your violent and sadistic desires anywhere you go, because BUTCHER is finally available on Nintendo Switch!

So grab it now and make humans beg for death during your usual bus ride! Just... play it with your headphones on.
Share:

The full version's campaign has been enhanced and the free demo - released!
Like promised before, we've added a pack of 3 levels to enhance the beginning of the game.

Those levels will be released for free as a standalone Demo (for those, who are still undecided).

All 3 levels happen on the Mothership and take place just before the game intro. We've put some details here and there that might help you reveal what Mothership and her spawns really are. 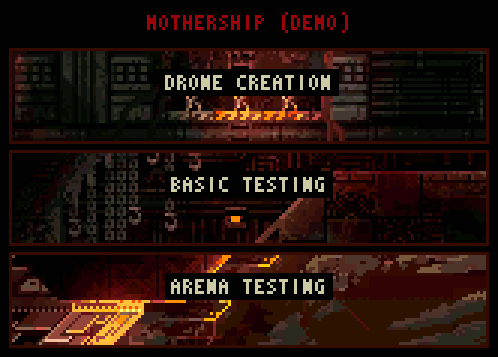 Most of all, just enjoy the atmosphere and challenge. And don't forget to try out the level editor!

How to start the new level pack
If you already own BUTCHER and have some progress going on, we recommend starting the campaign in another (temporary) save slot. Alternatively, you can just play the levels one-by-one from the level browser.

If you don't own BUTCHER, you can download the free Demo and enjoy ripping and tearing your targets apart (slowly enough to make sure they experience their last moments to the fullest).

If you like the game and decide to support us, you have a chance to buy it for 50% of the regular price (a week-long sale is still running!) ːbutcherchainsawː 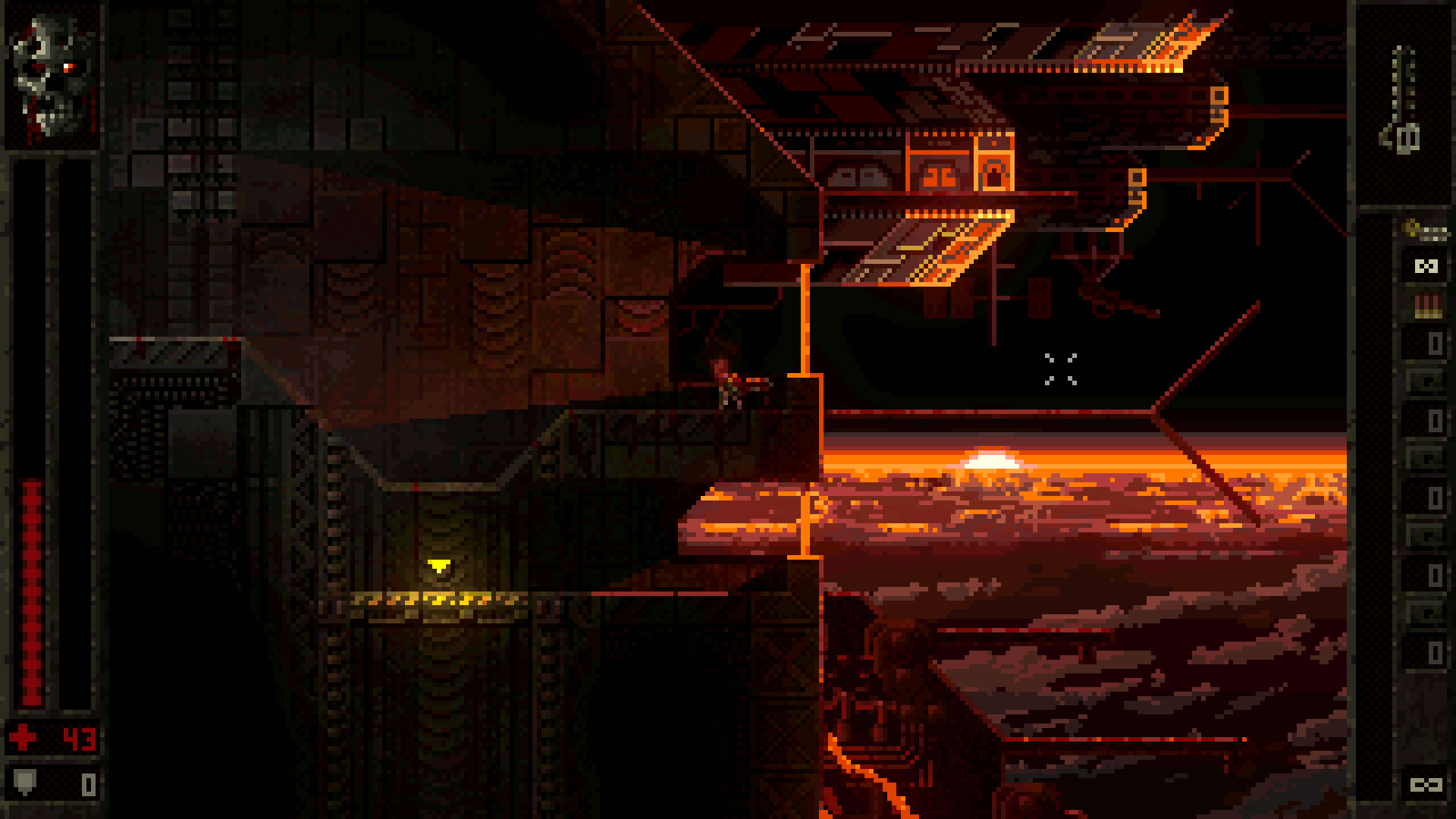 DRM-free demo mirrors: http://www.indiedb.com/games/butcher (will be updated on GOG and other stores as well, but it'll take more time)
Share:

Soon you're gonna have a chance to explore the Mothership a bit. Do you think it will explain what actually happens in BUTCHER? Or will it leave you with even more questions than answers?

3 brand new levels!
Check it yourself tomorrow (Jul 11, 2017 12:00 PM PDT), as the game is gonna be enhanced with 3 new levels that take place right before the vague Mothership intro. The new level pack is going to be full of hints revealing what Mothership and the main character really is. Explore the staggeringly beautiful, yet cold and hostile alien environment... before you show the same hostility to your miserable victims. 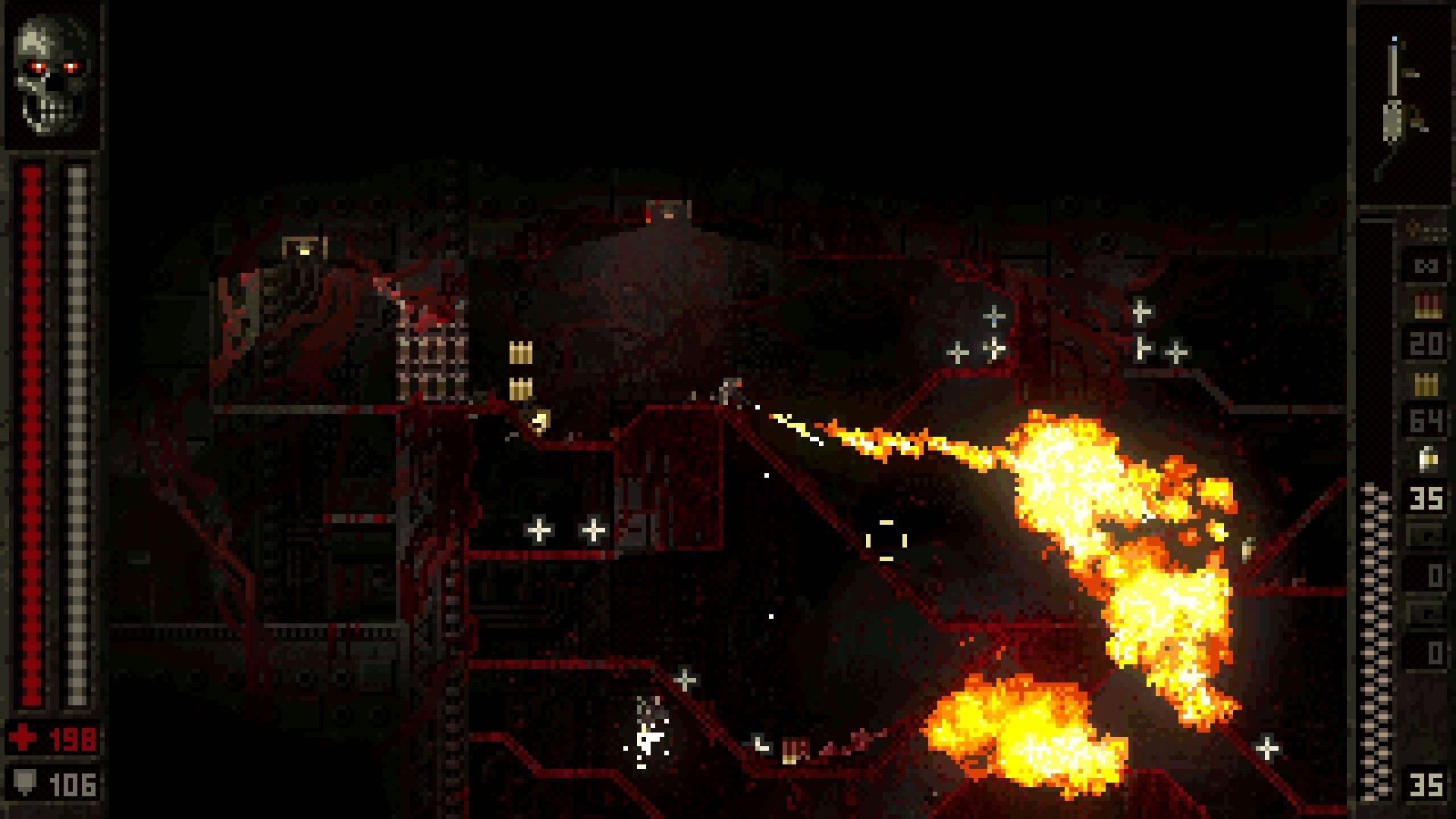 FREE DEMO for the undecided!
Moreover, if you're still undecided (or too scared) to buy BUTCHER, those 3 levels will be released for free as a standalone Demo version! All of that happening tomorrow!

50% week-long sale!
The sale is starting in a few hours today, so maybe that will help you decide as well! Stay tuned. 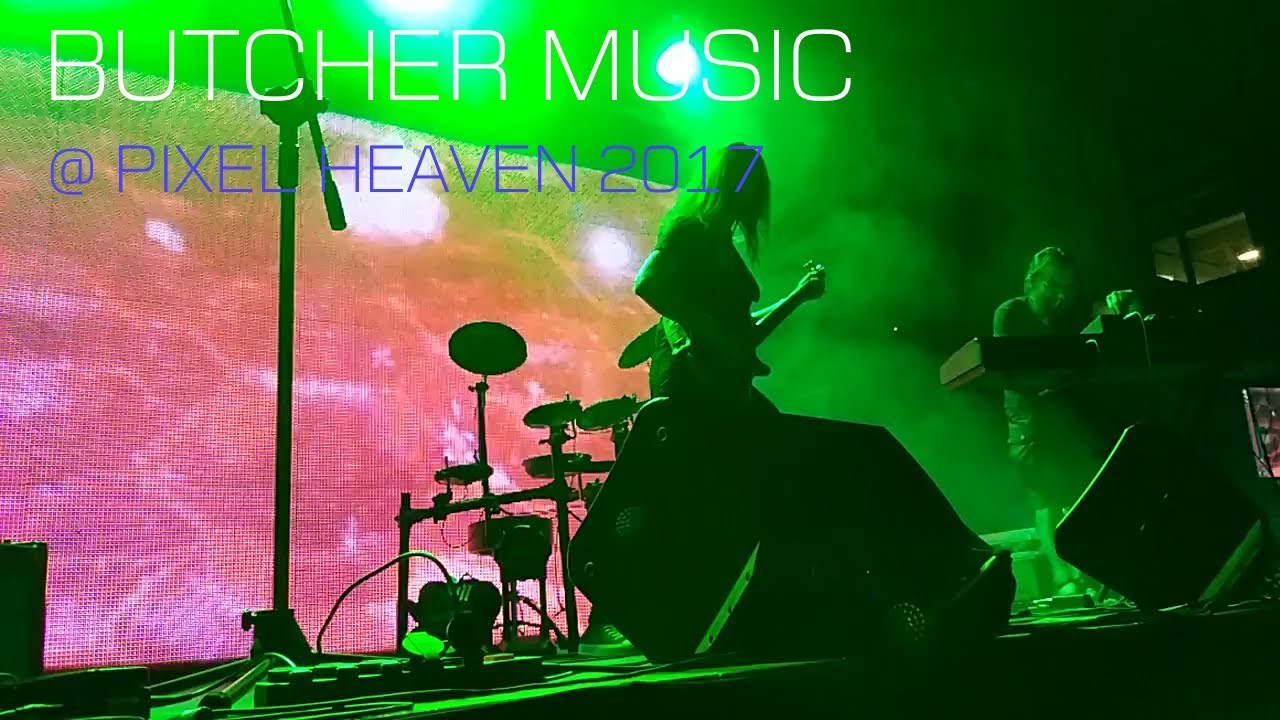 We had a really great but busy time before we were able to take some vacation.

We worked really hard to give an experimental game music concert with music improvised to the game played in the real time. It was one of the Pixel Heaven 2017 afterparty gigs. We wanted to stream it and publish some official recordings. However, the local staff had some technical problems rendering some of our plans impossible to realize.

Yes, we're all bearded, but they say beards are manly.

Despite having technical problems mentioned before (no recordings, delays, allowed to play only 13 minutes out of planned 30 etc.), we're happy that we managed to actually do all of this (it was my first time organizing a concert, yay!). Who knows, maybe we'll even do something similar in the future.

Demo version (already available in the Beta branch)
We're also releasing BUTCHER's demo version soon. Not because it's gonna be particularly profitable, but simply because we want to do it. It's ready to be tested in the Beta branch (it requires you to start the game again or play the levels one-by-one in the level browser).

The demo will offer 3 new levels and some new music. It takes place before the events of the main game. You start aboard the Mothership and take some calibration tests before you're allowed to go on your mission and seek your real targets.

We still need to fix some minor issues and do some tweaks, so we're waiting for your feedback!

Console releases
Thanks to Crunching Koalas, the game is also available on PS4 and XBox One! The list of consoles we support might grow in the future, but we can't tell you anything about that yet.

Also, prepare for Summer Sale starting in a few hours. Let's hope it will bring a little more gamers who like torturing pixel people as much as we do.

Remember about the level editor!
We want to play some levels made by you too! If they're really good, maybe we'll add them to the official collection as free DLCs (giving you a credit for that).
Share: 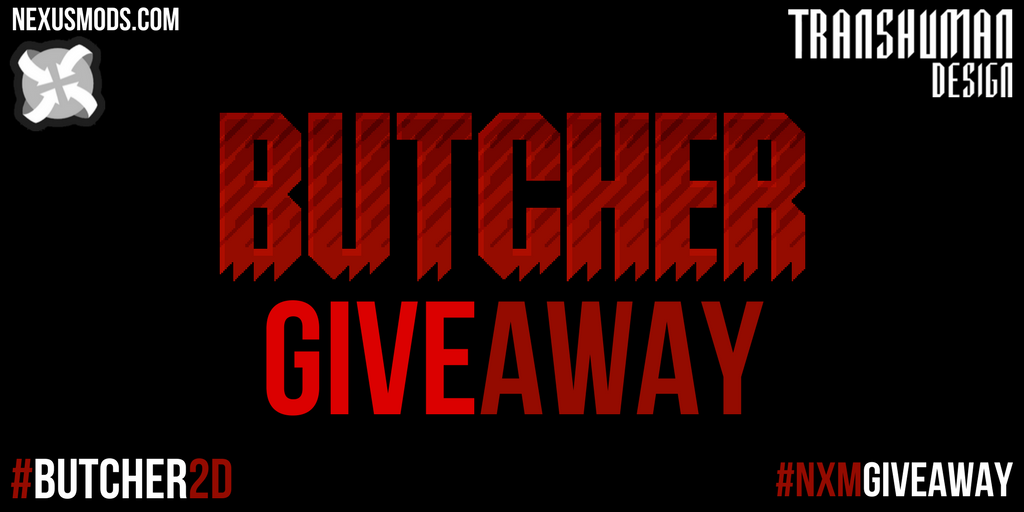 We are thrilled to announce that Nexus Mods is running another giveaway! The last one, in early March, was a lot of fun so we've decided to give away 25 more keys! Visit Nexus Mods on Twitter and Facebook and keep an eye out this Friday through Sunday (April 14 - 16) for instructions on entering!

If you don't win a key, fear not! We are planning to participate in the upcoming week-long Steam sale (starting Monday, April 17)!
Share: