Update v0.11.0 - Manager Skills
90 Minute Fever - Football (Soccer) Manager MMO - Isokron
Manager Skills are now in 90MF! They add a lot of real skill and tough decisions to the game, and will ensure that you can never rest on your laurels - they will press you to deliver the goods for your club each and every season and directly reward you for doing so!

Match Engine Changes:
- Added a short 'delay' to start of match before the players start running on the pitch to give the server/client connection more opportunity to link up so that users with poorer internet connections to the match server don't miss the start of matches
- Matches can now be paused and tactical changes applied when goalkeepers have possession of the ball
- Improved the ability of players to anticipate future ball positions and move accordingly
- Reimplementation of outfield player attribute: Anticipation. Now impacts that chance that a player will be able to anticipate the ball movements in a 'reactionary' capacity (i.e. to clip/deflect/block/control/etc fast moving balls nearby, particularly shots from players. As well as better get on the end of aerial balls that are fast moving to attempt headers)
- Crossing improvements (players are now more 'wary' of the opposition goalkeeper when passing/crossing the ball. Improved overall quality of crosses. More variation in crosses. Players more likely to attempt crosses now)
- Heading improvements (in particular ability to win them to begin with, and to not head over the crossbar nearly all the time when attempting to score a goal)
- Improved overall ability of players to interact with the ball, especially if fast moving and/or off the ground. This will have various knock-on impacts such as ability of keepers saving shots, defenders blocking shots, players winning headers, etc
- Overhauled much of the goalkeeper shot stopping AI. Goalkeepers are now capable of delivering much stronger performances
- Goal Keeper attribute Shot Positioning is now enabled and impacts how well a keeper positions themselves in order to save longer ranged shots. Positioning is also enabled and is tied to Shot Positioning
- Lots of balancing changes to goalkeepers due to their improved shot stopping AI and newly enabled attributes
- Improvements to shooting. Less wildly inaccurate shots, especially from players with higher shooting attributes. Increase shot power, especially from players with lower shooting attributes
- Improvements to players ability to take good penalties, picking better spots to shoot, and being able to shoot more accurately
- Various other small improvements to Penalty Shootout AI (for example: Keepers no longer chase after the ball if it's moving away from the goal during a penalty shootout)
- Improved collision detection of goal nets
- Slightly reduced amount of condition loss incurred by low Endurance outfield players
- Players with low Pace/Acceleration are now slightly less slow
- Players with low Work Rate are now work slightly harder
- Fixed bug whereby players would not setup properly to defend against an opposition penalty kick or attacking free kick, if that team had a player sent off and the user managing that team made certain tactical changes after the red card was awarded but before the set piece was taken
- Fixed a bug whereby during penalty shootouts, goalkeepers could always immediately get off the ground when they dove to make a save. This meant that if they deflected a shot, they could then immediately catch the deflection (so there were previously never any saves visually deflected during penalty shootouts)
- Fixed a bug that could result in a long pass completion counting as multiple long pass completions (and in turn meant that a player could finish the match with more completed passes than pass attempts)

Update v0.11.0b [2020-05-01]
- Fixed Trophies widgets not working
- Fixed an issue whereby the contract end date calculation for players was using the users local machine clock instead of the server clock. This meant that if they were in a timezone behind UTC time, say in America, for exmaple, then for the first few hours of the season all their players would incorrectly say their contract was going to end a month earlier than it really was.

Update v0.11.0g [2020-05-06]
- Fixed wages not 'projecting' properly when buying or selling players during the day. Note: These projections were corrected during the end of day each day, and the actual wages being charged during the end of day were correct
- Financial Summary Widget now takes into account your reduced wages from Loyalty. Note: The correct wages taking into account Loyalty were being charged each day, it's just that the value being displayed on this widget was incorrect

Update v0.11.1a [2020-06-01]
- Fixed Shareholder Dividend Payments not projecting correctly for users who had the Investment Manager Skill
- Fixed icon tooltips for Learning and Scouting manager skills incorrectly displaying last months values
- Fixed icon tooltips for Versatility and Learning stretching their aspect ratio on the positions pitch diagram on player profile when only one of these two skills were selected
- Fixed scaling issue on Transfer Details Widget that could cause buttons to not be visible on some screen resolutions 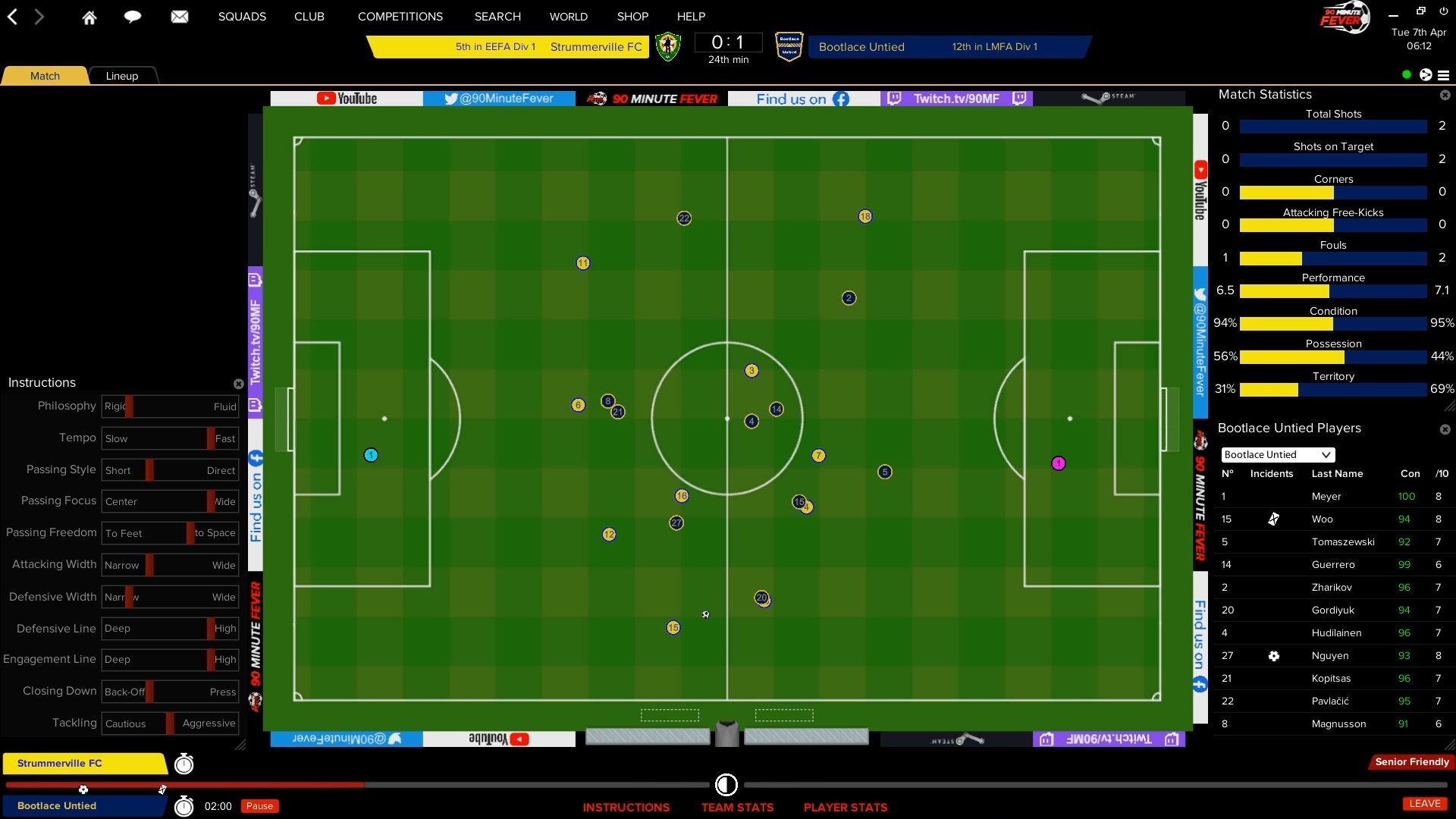 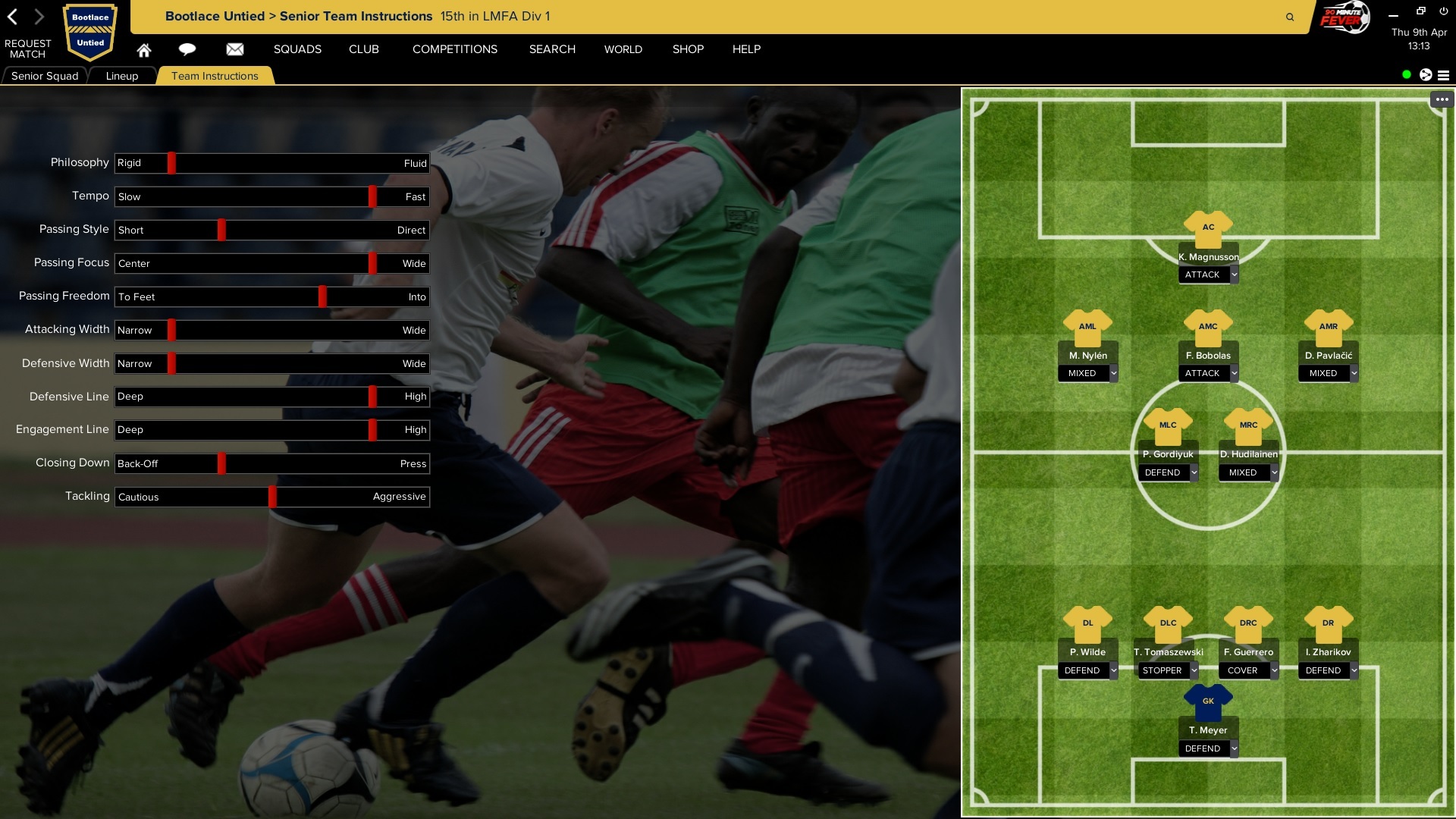 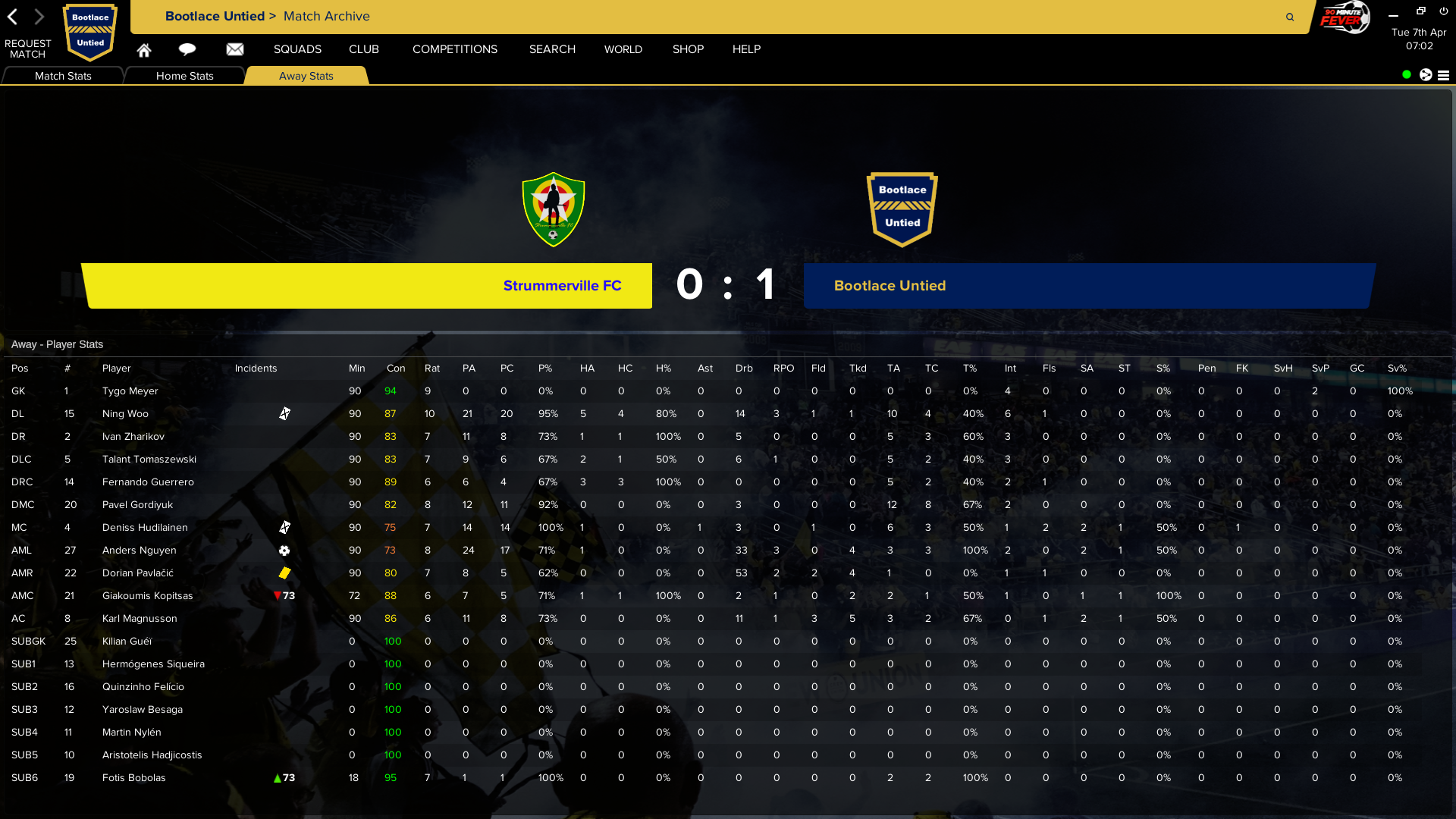 Get involved as we continue to develop the new 2D match engine and improve the game.
https://store.steampowered.com/app/468070/
Share:

Update v0.10.0 - New 2D Match Engine
90 Minute Fever - Football (Soccer) Manager MMO - Isokron
We are delighted to announce that the new 2D Match Engine has been added to the game. All matches in 90MF are now using the new match engine!

With Steve and Nick discussing the new injuries system, squad rotation and set piece takers in the new match engine that is coming end of this month!
Share:

The testing gameworld is now open again for the 5th Phase of testing for the New Match Engine. If you don’t already have access to this but would like access, more information about this can be found here:
https://steamcommunity.com/games/468070/announcements/detail/2783708311862770972

There’s a Steam Discussions board to discuss things with the new match engine that can be found here:
https://steamcommunity.com/app/468070/discussions/13/


Note: You'll need to be logged in to Steam to be able to access the above links

This is going to provide a very different experience. It fully simulates and graphically represents the entire match from a top-down perspective so you can see exactly what your players are up to at all times! Viewing the entire match enables managers to make informed decisions in real-time based on how the match is unfolding in front of them to try and take advantage of their team’s strengths and any opponent weaknesses that they might be able to identify.

The new Match Engine is many times more complex and engaging than the current Match Engine (and indeed any match engine in any online football management game that we are aware of). We expect that the completely new match experience with this amount of depth, options and opportunities will immediately create some changes in the meta-game. For example, it may be that certain attributes have more value in the new match engine than the old one and vice versa. This will inevitably mean that prices for players will fluctuate inline with how much value the userbase places upon their attributes. It is also likely that the importance of different attributes will change as many managers will naturally gravitate towards tactics/players that take advantage of these imbalances whilst we continuously strive to improve the balance in subsequent updates. So in short, please be aware that the meta-game, which has been extremely stable for a very long time, will be changing regularly in the coming months!

A big thank you to everyone that has stuck with us over these past months as we have been developing this. As many of you know, we are a very small team, and for a few reasons it has taken us longer to get it into ‘live’ than we had initially foreseen. The most notable reason being increasing the scope of what we wanted to achieve with the first release of the new Match Engine to ensure it has more chance of fulfilling more users hopes and expectations and thus is more positively received overall.

We really appreciate your patience and understanding. Hopefully you’ll agree come February that it was worth the wait! We will be releasing some more details in January along with an accompanying podcast.

We believe this addition will lay the foundations for us to take the game forwards as a truly unique proposition/gameplay experience that even further sets 90MF apart from everything else out there in the online football management game genre.
Share:

The testing gameworld is now open again for the 4th Phase of testing for the New Match Engine. If you don’t already have access to this but would like access, more information about this can be found here:
https://steamcommunity.com/games/468070/announcements/detail/2783708311862770972

Please read this post which describes in detail the current limitations of the new match engine and what the third phase of testing entails here before starting:
https://steamcommunity.com/app/468070/discussions/13/1738882740680377507/

There’s a Steam Discussions board to discuss things with the new match engine that can be found here:
https://steamcommunity.com/app/468070/discussions/13/


Note: You'll need to be logged in to Steam to be able to access the above links