Our Goal
From day one we set out to develop an exciting and compelling RPG with a vast story and interesting characters. The project that emerged became a modern RPG that evokes nostalgia, but also improves on many of the pitfalls of classic RPGs that we remember so fondly.

Modern technology has allowed us to design and develop a beautiful and vast 3D world, with stunning towns, dungeons, depth of field and verticality that adds to the game's atmosphere. The 360 degree camera allows the player to fully explore the 3D environment, rotating and zooming to find hidden paths or just to get a better look at the world.

The Story
'When men turn to an ancient darkness to enslave the world, the sun will bless the chosen four with the power of fallen gods'

Two hundred years ago a great war waged between man and magic. This conflict created giant fissures in the earth's surface, which began to spew a strange mist that conjured terrible monsters. Today, the people of Varos fear magic and those who possess the power to wield it.

Step into a world rich with history and lore
As you travel through Varos, you'll learn about the history of the world and its inhabitants. In particular, you'll hear about the ancient war, how it almost destroyed Varos, how it caused continents to be split into islands and how it left scar-like rifts along the planet's terrain.

The Characters
Varos is a world ample with diversity and well-developed races. It was important during the writing process to explore different kinds of beings, including the beings living in Varos. You'll discover an interesting mix of races as you play, each one with its own variety of lifestyles, beliefs, and outlooks on life. 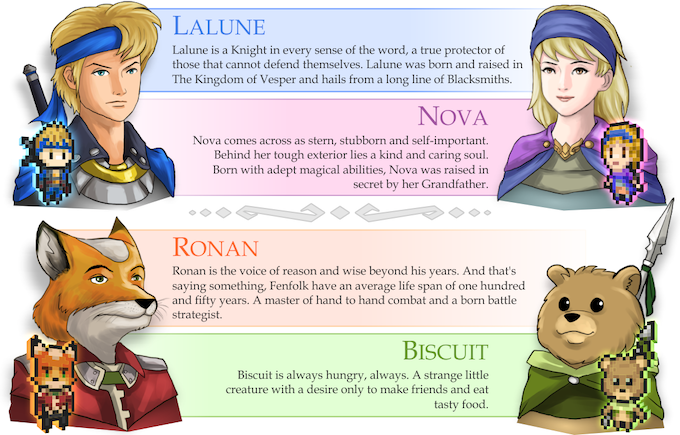 Exploring Varos
We've designed the world of Varos to be both vast and beautiful. We really want the player to make the most of the camera design, rotating and zooming to get a better look at the world and environments as they travel and explore. We will also be using this opportunity to hide secret areas, loot and Easter eggs in Sol Ni Koro.
No forced backtracking!
We're avoiding filler, so there will be be no forced backtracking through areas the player has previously visited. Sure, you can backtrack if you want to search for secret areas, loot or just power level your party. But you absolutely shouldn't have to.

The Combat System
The combat system in Sol Ni Koro has been designed to be at its core fast paced and streamlined, but also fun and exciting!

Unique Character Skills
Each playable character in Sol Ni Koro has a completely unique skill set. Characters will gain new skills in two ways:
1. Levelling up
2. Equipping 'Scrolls'
Each character and his or her skill set will prove useful in different battle situations. For example, Nova's skill set 'Magic Arts' is focused around offensive magic, while Lalune's skill set 'Sword Arts' leans towards physical/elemental attacks and de-buffing the enemy.

Release Update v2.1
Project Druid - 2D Labyrinth Explorer- - Shortcircuit
Greets all. Thanks to Nax_o my tester we found a small bug after I released update. I happy to announce that I uploaded a fixed update today to v2.1 And hoepfully you can enjoy it bug free. If you do find them please report them.

Note : For the people asking for trading cards. I am working on them. So hopefully in a short time they will be available.

Project Druid V2 is released.
Project Druid - 2D Labyrinth Explorer- - Shortcircuit
Greeets all. Well I finally managed to upload the new version of Project Druid. I hope this will be more of the liking of everyone.

Just a quick note the controls are:

Warning : I just noticed that my something is wrong with my compiler. There is a small bug on Level 3 which I will fix in a day ,2 tops. It will not break the game but can be annoying. Sorry about that.

Update Release!
Project Druid - 2D Labyrinth Explorer- - Shortcircuit
Greets all. The update is finished. Just having some trouble with the upload to Steam. When that is fixed the updated version will be available.

Greets all. Im very excited as im nearing the end. Hoepfully one more week and the update - patch will be ready. It was a lot of work. And again I want to thank Nax_o for the help with the bug-list.

I overhault the game. The chests have meaning now. Not just points. Traps and health are scattered now. The new controls are WASD with mouse shooting.  Laso fixed the animation problems. And (I hope) the immortality bug has been fixed. Im also working on a nice Dvd cover for those who want it.
Im also looking in to the trading card thing. But I need some time to make some nices cards.
Share:

Final Update news
Project Druid - 2D Labyrinth Explorer- - Shortcircuit
Greets all I am happy to report that the update is almost finished. Im working on some polishing now.

I will play test the new update this week. And hoepfullu release the updated version around 12.09.2015.

Note : I haven't got far on the trading cards thinh. Sorry.
Share:

Update news - Going Strong
Project Druid - 2D Labyrinth Explorer- - Shortcircuit
Greets all. Most of the bugs have been ironed out. Now Im working on the game mechanics. .Please follow the www.projectdruid.co.nr site news for details.
Share:

Update - Continues
Project Druid - 2D Labyrinth Explorer- - Shortcircuit
Greets all, I just wanted to keep people posted. I already opened a news section on the games website for more details. But here is it :

- A overhaul of the controls. People didn't understand that the controls were not bugged but by desing. Neverteless I am respecting this and overhaouling the controls. It will be WASD with mouse.
- I am also changing the GUI. Hoepfully more graphics.
- Ironing out the bugs as much as I can.
- Cleaning the sound bugs.
- More effects and sound s maybe.

anyway Im working as much as I can and triying to come up with some nice ideas. Do understand I am not in for a quick money grab as some said in the comments. Also this game is made from scratch in Game Maker. So I have to dig a lot to change something or fix something. Some may understand that it is not easy to make a game. We live and learn.
Share:

UPDATE - Patch
Project Druid - 2D Labyrinth Explorer- - Shortcircuit
Greets all. I am recieving some bug lists from some players. Thank you for the efford. And I will be working on a update. As far as I can see the next issues will be ironed out.

- A key to pass the intro.
- A music on / off key
- I will try to fix the pause button
- Some people got stuck between trees etc. I will try to find them all and close the gaps. As I want the enemies to be able to do it but not the player.
- The gold - points will be changed as some one pointed out it has no meaning.
(It sounded and looked good at the design time)
- I will also try to change the player jeys and make them WASD.

As I am a part time de I can not give a release time at the moment.
Share: