Hey everyone! Long time no space! We bring news from the front! ːcobaltː

Super Galaxy Squadron EX Turbo is now available for Linux + Steam OS!
It should work right out of the box (32bit only for now) so give it a go!

We're just as committed as we've ever been to keeping our games up to date and always making them better so... we'll be porting SGS EX T over to GMS 2 so we can create an even better Linux version, Mac version and console versions! That's right - even Nintendo Switch ːchartreuseː 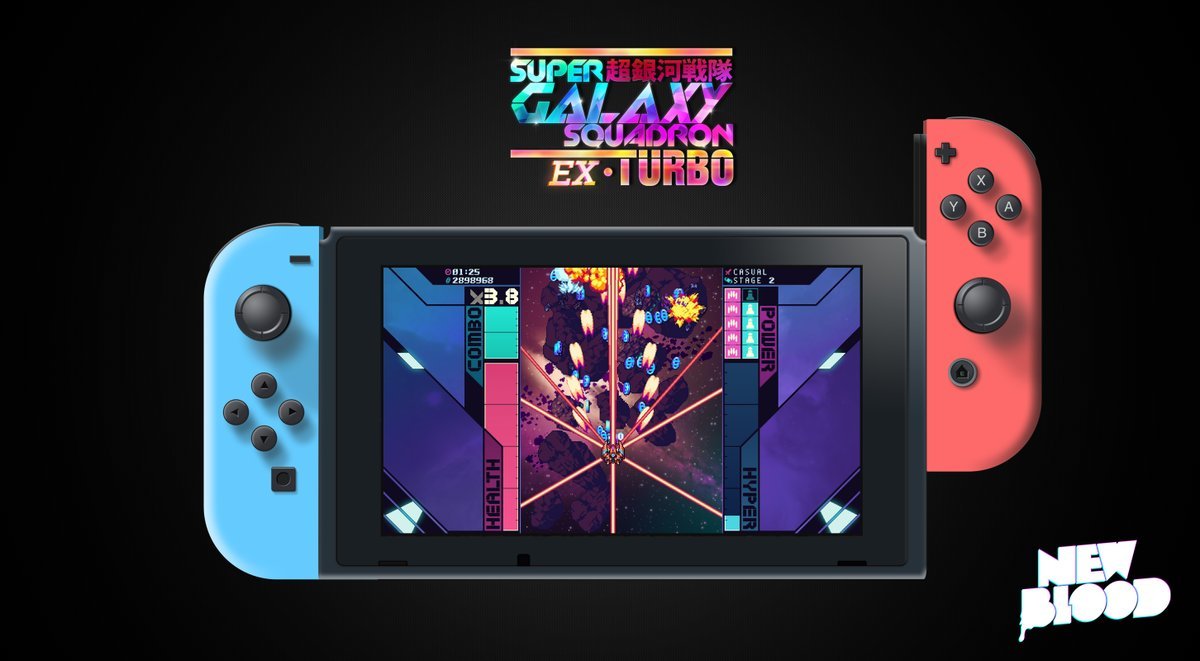 We're also going to be looking into adding long standing requests such as remappable keys, gameplay + boss tweaks and maybe even some cool progression systems. ːfuchsiaː

Who would think we'd still be updating a fun little game that Nick made for charity back in 2015? ːtealː

We did. Because we're New Blood - and we're good like that ːTRː

https://store.steampowered.com/app/345860/Super_Galaxy_Squadron_EX_Turbo/
As always, you can drop into Discord.gg/NewBlood to chat with us and keep up to date on all the latest - and also check out our brand new developer page to see what's up with ALL of our games as well as our latest recommendations.

It's been a long time coming but it's finally here!

The latest, greatest and FINAL edition of Super Galaxy Squadron.

What started as a simple college project by Nick Clinkscales has turned into what we think is one of the most full featured, fun and accessible SHMUPs in the galaxy.

Now, if you recall... the sales of the original SGS benefitted Child's Play Charity

So how fitting that SGS EX was just a part of the Humble Freedom Bundle!

We couldn't be more proud to do some good for the galaxy. ːsteamhappyː 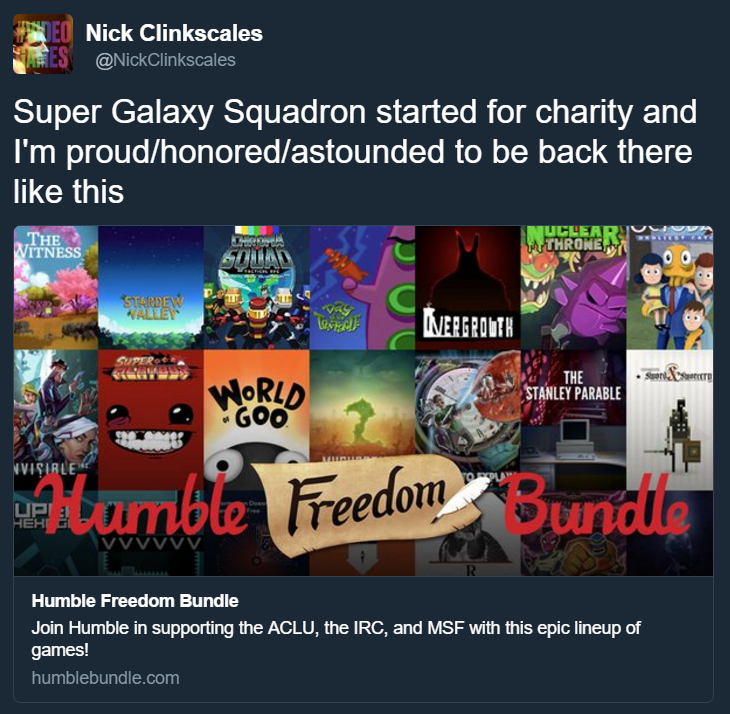 SGS EX TURBO will of course be offered as a FREE upgrade to anyone who already owns the game. Just like EX was a free upgrade. Just like any and all upgrades to New Blood's games will ALWAYS be free. Don't tell our accountant.

We'll be keeping the price of the game at $9.99 through launch week until March 13th when we'll raise it to $11.99. This will be the final final final price forever and always. So get in now! 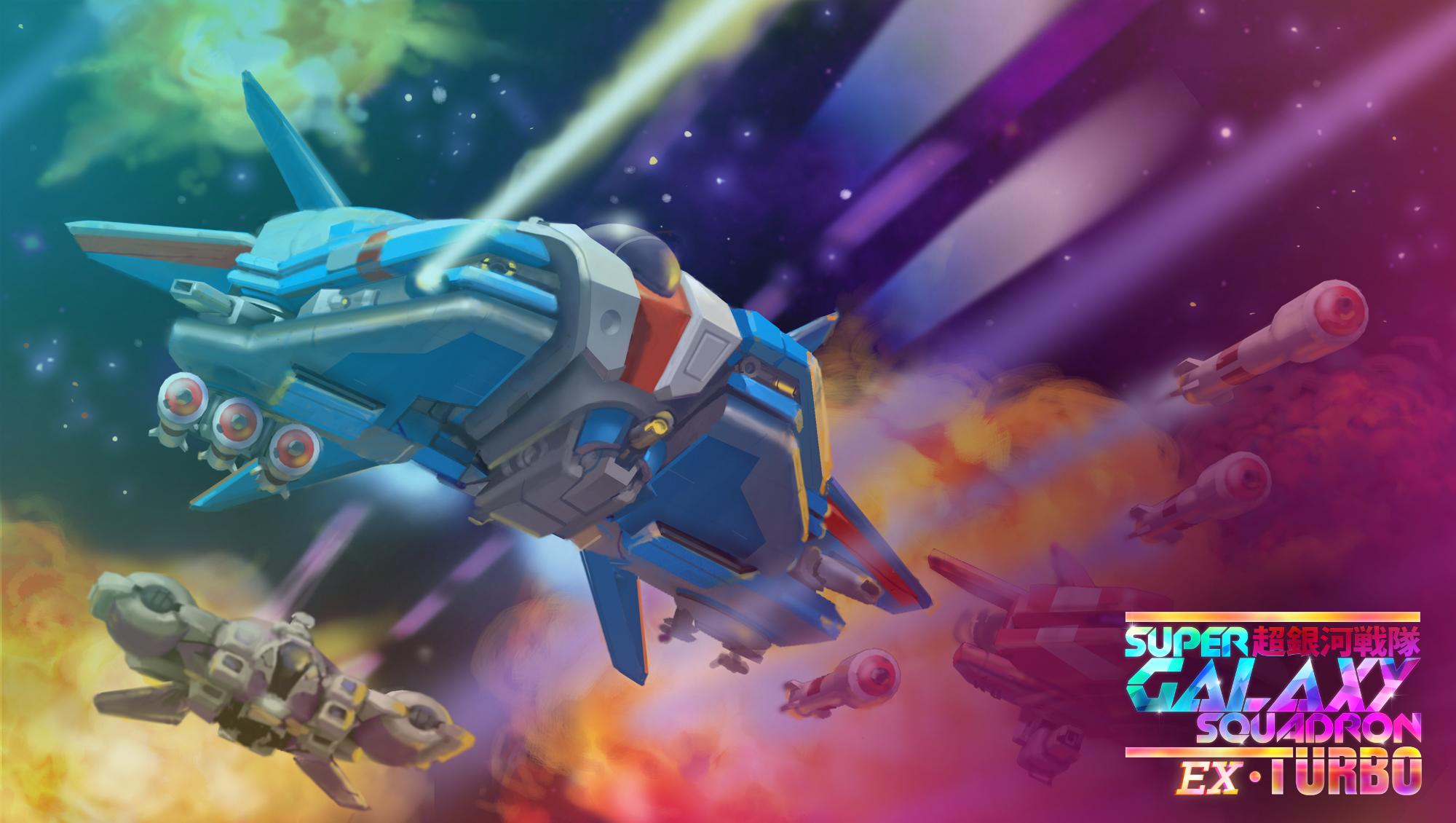 That being said, both Nick and us here at New Blood want to thank you for taking this journey with us over the last three years and hope we'll see you again SOON™ when the inevitable once again happens... and you're once again called upon to... SAVE THE GALAXY \o/ 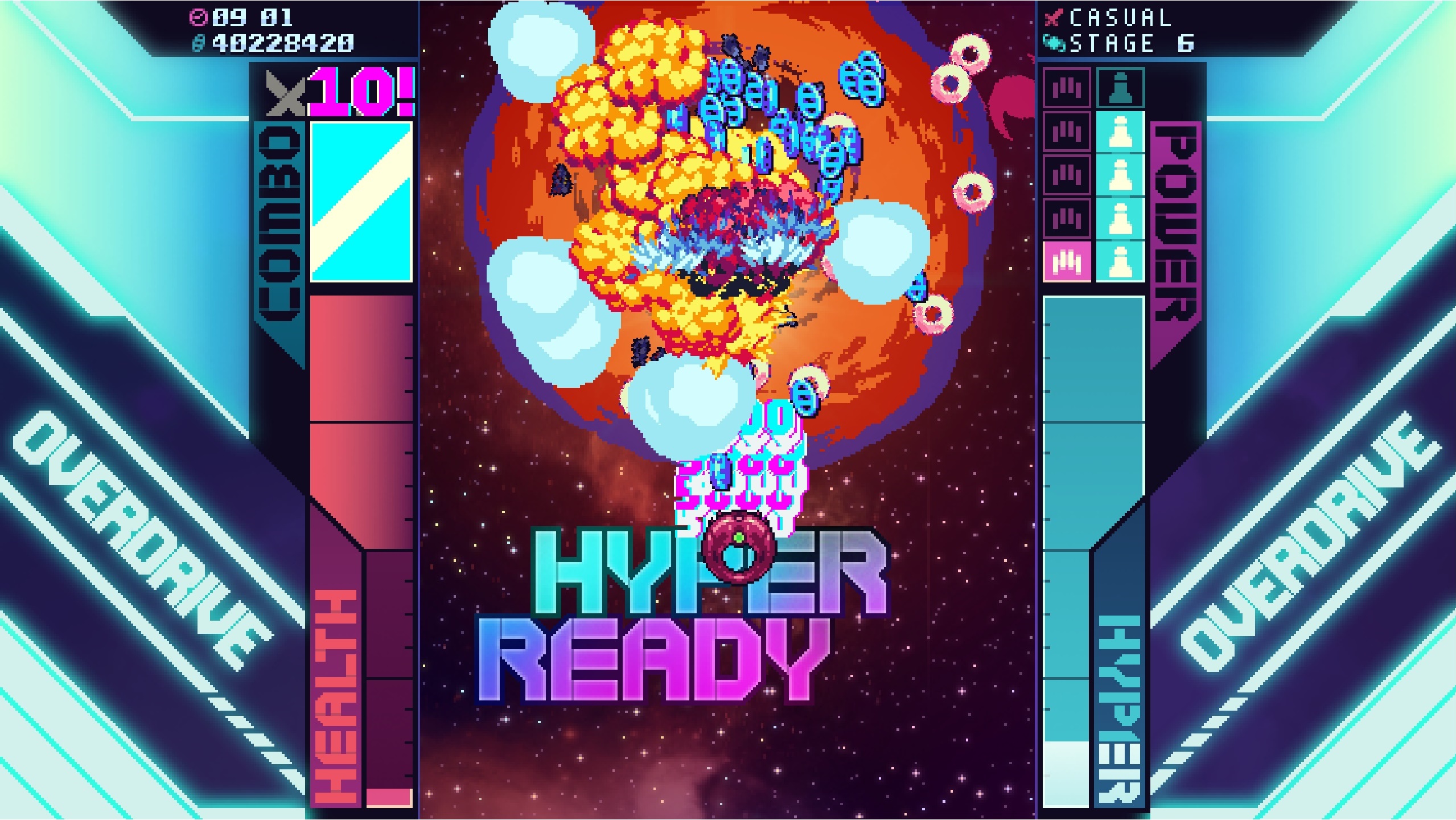 That's right - Super Galaxy Squadron EX a/k/a "The People's Shmup" is finally ready for launch. The remastered version of New Blood & Synset's (not a) bullet hell shooter that took everyone by surprise last year has been rebuilt from the ground up with all new art, all new audio, all new modes, but the same SUPER squadron of 14 playable ships. ːcobaltː 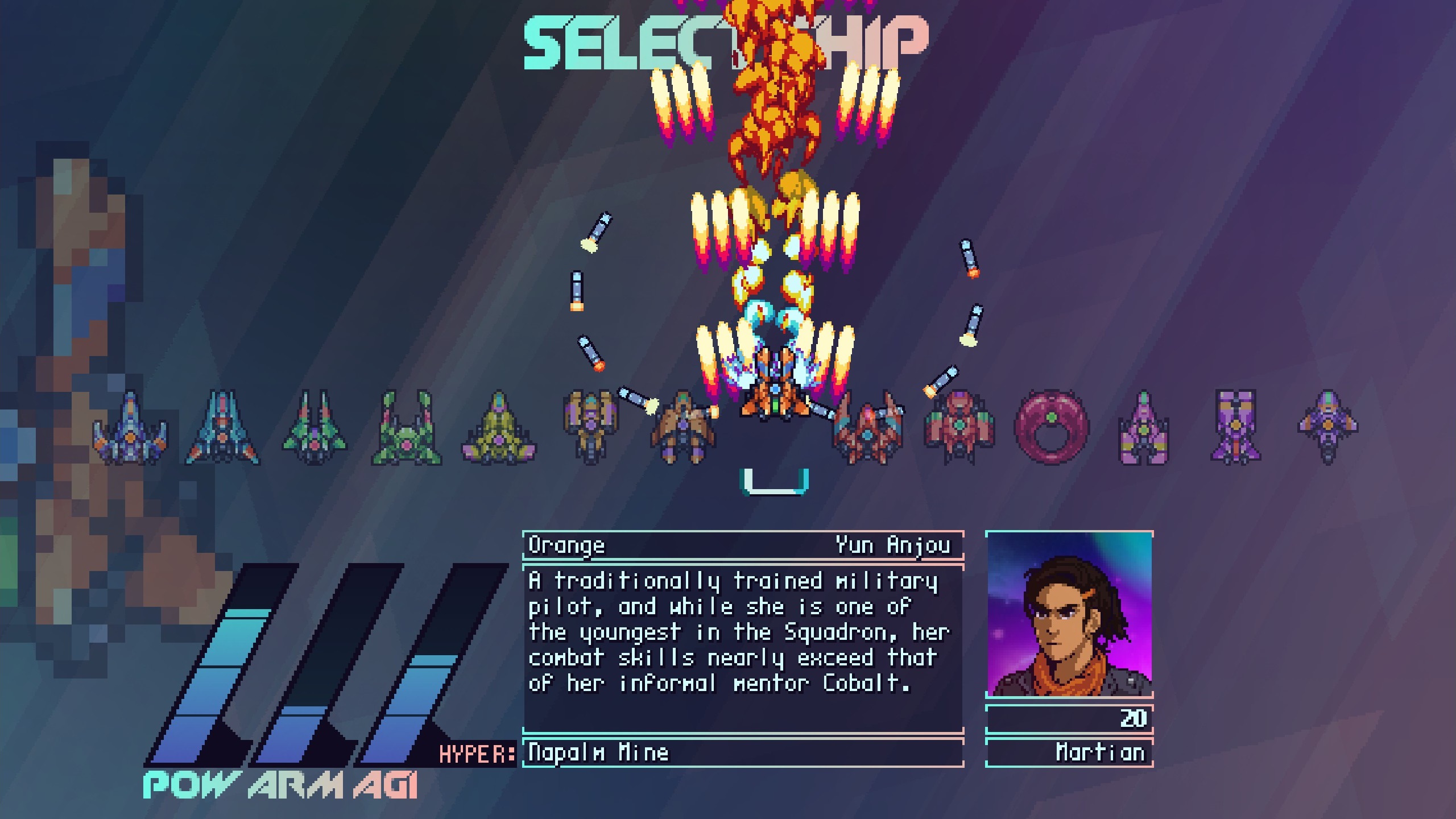 As you may know - proceeds from the original Super Galaxy Squadron benefited Child's Play Charity and as we get ready to launch Super Galaxy Squadron EX, we are proud to be making a $10,000 donation thanks to everyone who purchased the game last year! You've all made the galaxy a better place for sick kids the world over. \o/ LOOK AT THIS BIG CHECK!

Moreover - everyone who already owns Super Galaxy Squadron on Steam (that's you) will be upgraded to Super Galaxy Squadon EX for FREE and have the option to launch either the new or classic version of the game. (And yes both have Steam leaderboards) ːcyanː

Those who are new to the Squadron can get SGS: EX for $9.99 - as well as Random Encounter's original soundtrack for just $1.99 extra. That's $12 total for the only shmup on Steam you can probably beat in one sitting as well as the music to go with it. A good deal in any galaxy. ːchartreuseː

SGS: EX will also be playable at MAGfest 2016 during its launch as part of the (MIVS) Indie Video Game Showcase with game creator Nick Clinkscales and producer Dave Oshry on hand to do battle - in space! ːtealː 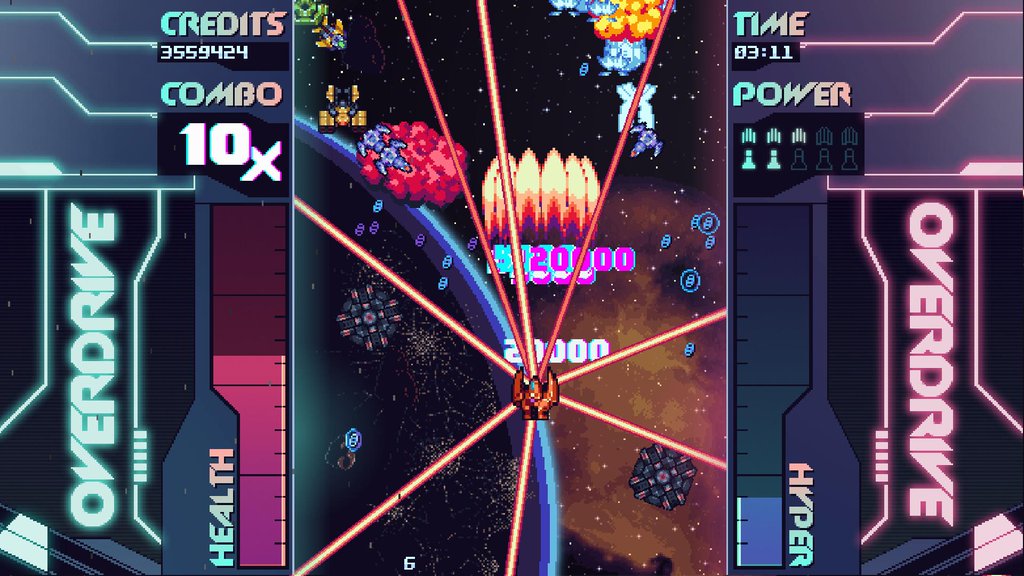 I write to you today all the way from Barcelona, Spain to bring news of the latest Super Galaxy Squadron: EX Beta update!

Senor Clinkscales has been hard at work continuing to add to the greatness that is SGS: EX and I'm here to tell you how. 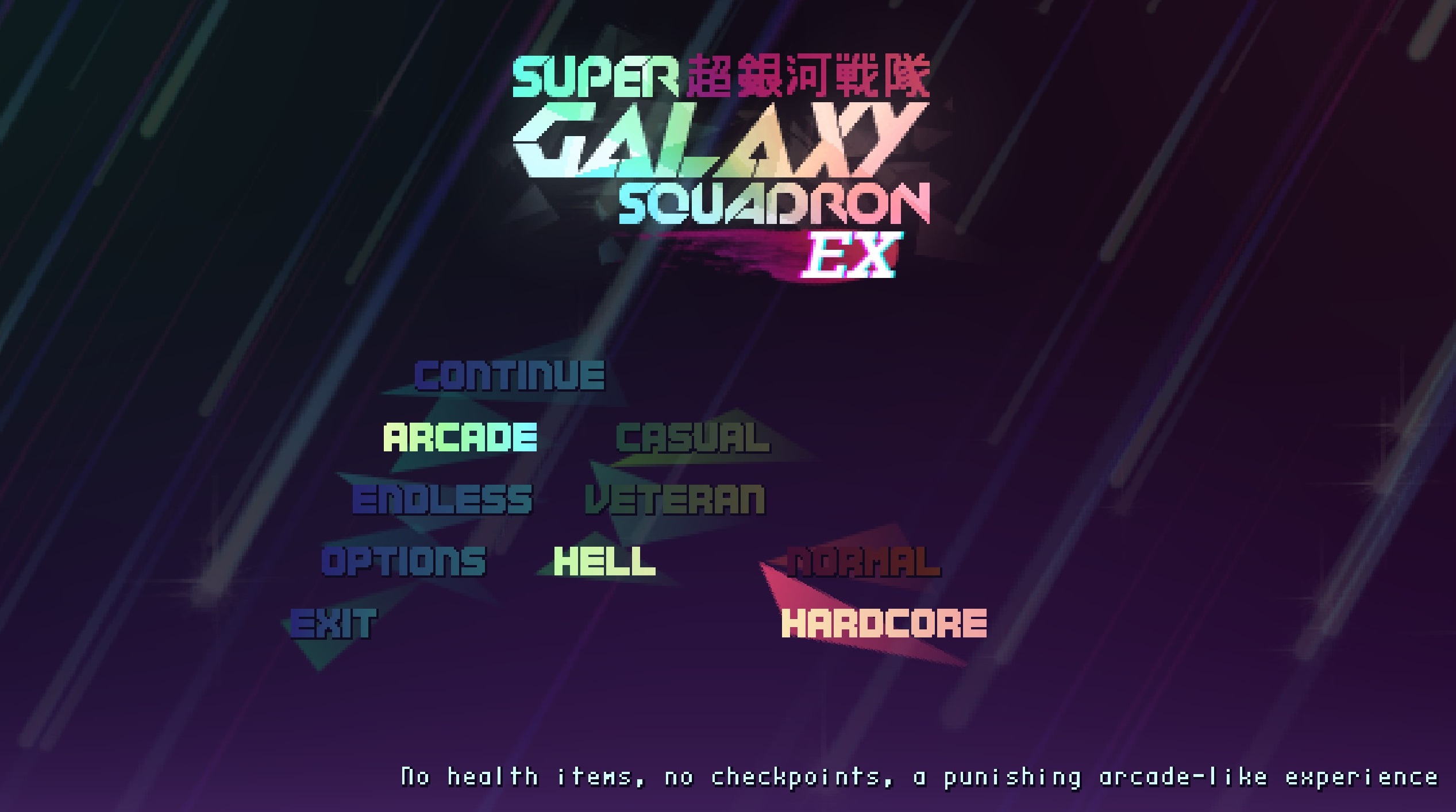 That's like Easy, Medium and Hard - all available in Normal or Hardcore modes. 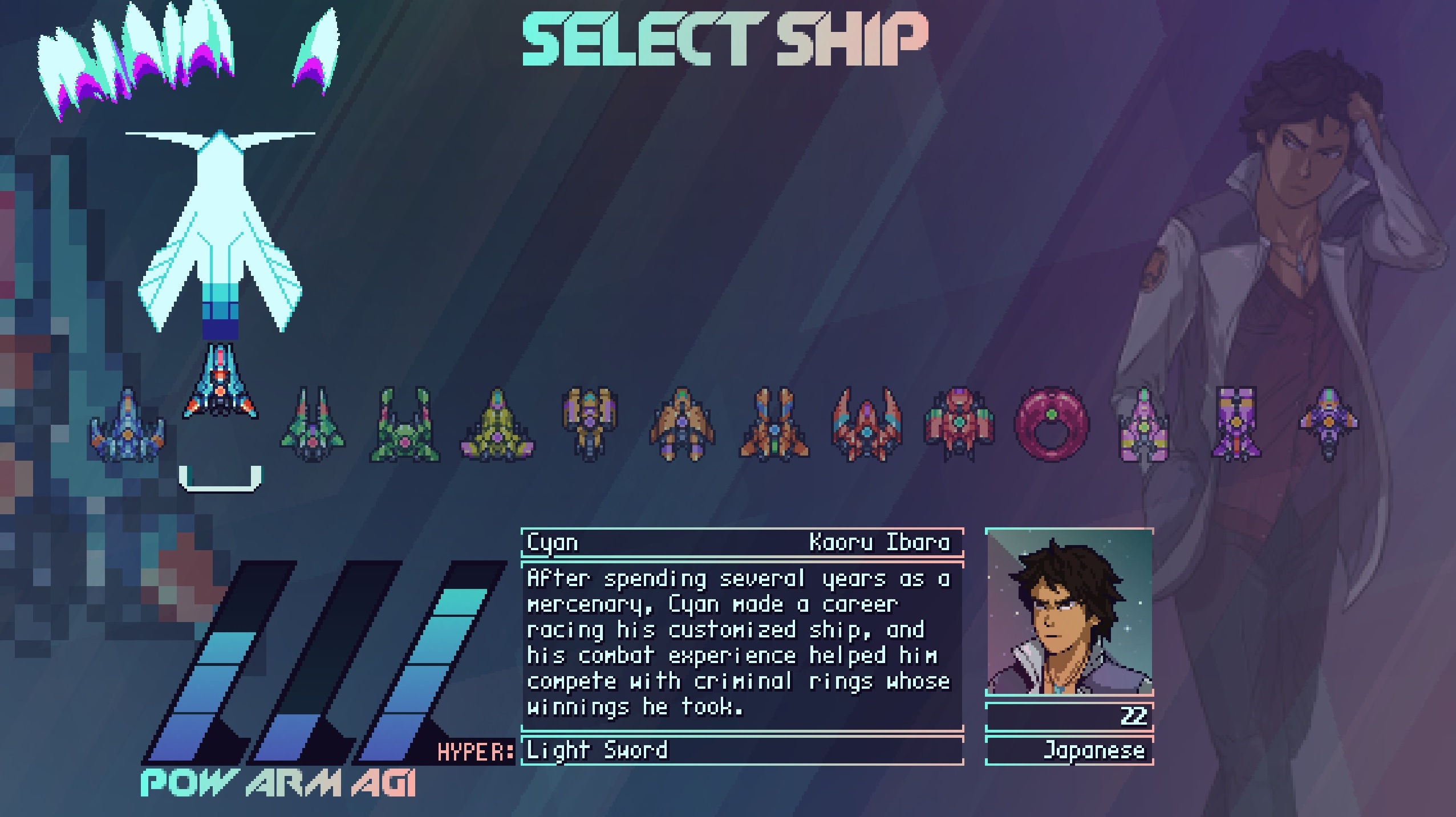 Ever wanted your favorite ship to have more CHARACTER and backstory? WELL NOW THEY DO. Nick has started giving each ship its own unique character and backstory + portrait to go with it. NOW FEEL MORE CONNECTED TO YOUR PILOT THAN EVER BEFORE.

Go test it out by opting into the BETA branch in your game properites and PLEASE continue to give us feedback as we continue to turn Super Galaxy Squadron into SUPER GALAXY SQUADRON: EX

The EX stands for... EXTRA BUENO

http://store.steampowered.com/app/345860/
Owners of SGS can check out the EX beta RIGHT NOW

The original soundtrack to SGS by Random Encounter is now also on Steam, Get it right now for just $1.99 and play it over your games with boring soundtracks! ːcobaltː

http://store.steampowered.com/app/384270/
Our SHMUP lord and savior Nick Clinkscales has been hard at work updating Super Galaxy Squadron to SGS: EX and with your help we can turn SGS: EX into the most super dopealicious SHMUP on Steam.

Better yet? All proceeds still go to Child's Play Charity.

So go save the galaxy all over again. FOR THE KIDS ːfuchsiaː
Share:

Thanks to everyone who got Super Galacy Squadron during launch week! Spread the word and let the people know the 15% discount ends TOMORROW!

Super Galaxy Squadron v1.01 Update is Live!
Super Galaxy Squadron EX Turbo - El Oshcuro
Everyone who's supported us throughout launch has been awesome and because of their help and some detective work that would put Sherlock Holmes to shame, we've tackled and patched a few things we heard from the people playing. ːfuchsiaː

In version 1.01, we've fixed the most common issue reported by players related to the game hanging or even crashing upon death as well as a minor aiming issue.

That means no more floating in space. How are you supposed to save a galaxy just sitting around in space watching enemies shoot?

Thanks for making this an awesome launch and here's to a great weekend of space shmup hotness! ːtealː
Share:

Super Galaxy Squadron will push your eyes and fingers to their very limits with BLISTERING CUTTING EDGE GAMEPLAY AND GRAPHICS created by New Blood's own Nick Clinkscales.

New Blood is super pumped to get SGS out there today and we are always here if you need us. Unless we're asleep. In that case we're not here but will be here soon.