Ciconia When They Cry - Phase 1: For You, the Replaceable Ones

11/10/2019 Update
Ciconia When They Cry - Phase 1: For You, the Replaceable Ones - MangaGamer
This update fixes various issues including:
Please let the game auto-update itself to apply.
Share: 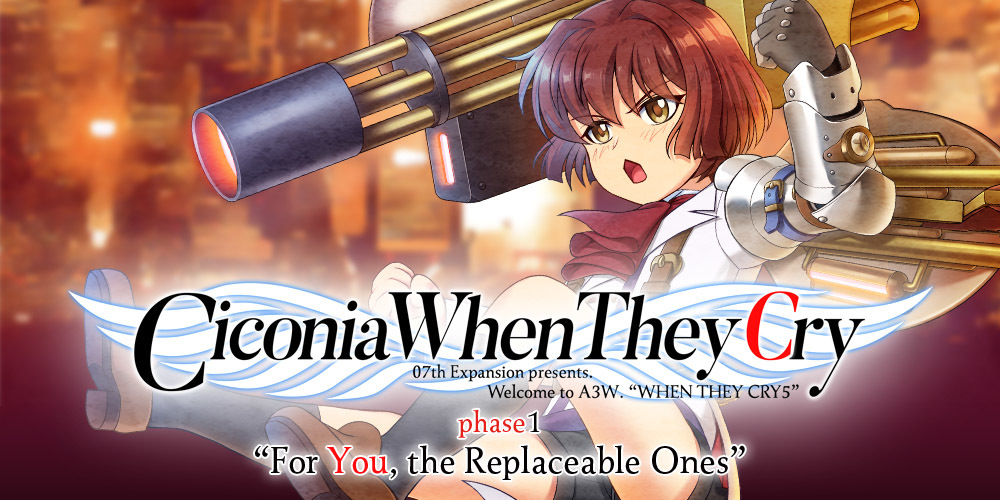 "In this next game, I won't give you the privilege of being a player!" challenges creator Ryukishi 07, with regards to his newest release, Ciconia When They Cry!

In Ciconia When They Cry, World War 3 has come and gone, with nuclear winter only narrowly avoided by new military technology, the Gauntlet, which allows those wielding one to fly like fighter jets, fight like battleships, and repel attacks like tanks without any additional equipment. The Gauntlets require particular talent and special training administered from a young age in order to control, and the young boys and girls capable of mastering of them become known as Gauntlet Knights. The main characters of Ciconia When They will be a group of these young Gauntlet Knights who, after the peaceful competition in the International Battle Standard Festival, become fast friends vowing to prevent another world war together. However, world events are leading directly to World War 4 like a cascading row of dominos, and these "main characters" are nothing but pawns in the global games played by those with a right to sit at the table.

Will these youth be forced to murder each other? Can the tragedy of war be prevented by mere pawns? Who are the real players in these games, and will you, the fans of When They Cry, fight for your seat at this deadly game?

This newest addition to the When They Cry franchise from Ryukishi07 and 07th Expansion is now available for pre-order on MangaGamer!
Share: