Thanks as always for your reports and feedback! Keep them coming. Watch out for news about the next major content update soon. 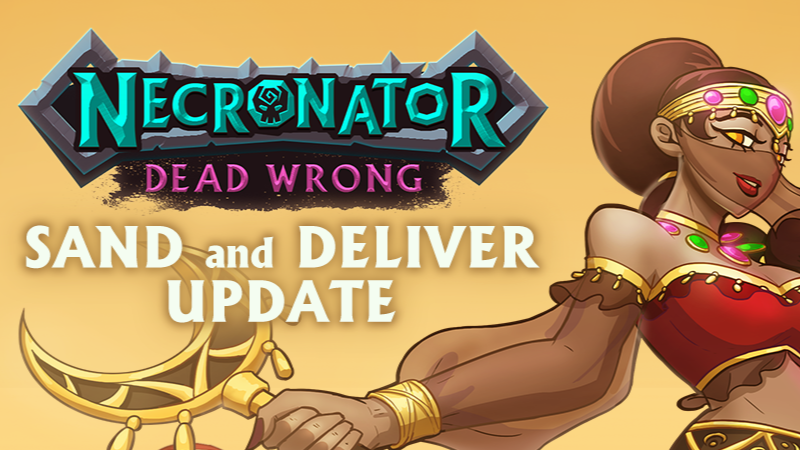 Hey Necronancers, we hope above all else that you and your friends & family are safe and healthy right now.

If you're up for some Necronator: Dead Wrong, then we've got one heck of a big update for you today; if you thought last month's Infinity Update was chunky, wait until you see this.

The Sand and Deliver Update (Early Access v0.4.0) is live now, and you will find a whole new sector to conquer in it. The desert realm of Al'Noobi awaits those who defeat Lord Balderdash in the first sector.

Al'Noobi's genie overlord has a whole host of surprises for you (and even Lord Balderdash has picked up a few new tricks) so we've armed you with a host of new spells and squads: some of your new squads have never-before-seen-powers. Check out the notes below!

You may have noticed that we talked about spells for summoning units directly to the battlefield; we're holding on to those spells for a new commander, as they didn't really fit with our intended playstyle for No. 7. Hmm, I wonder when that new commander will be arriving...

As always, be sure to follow Modern Wolf and Toge Productions on Twitter for all the latest. 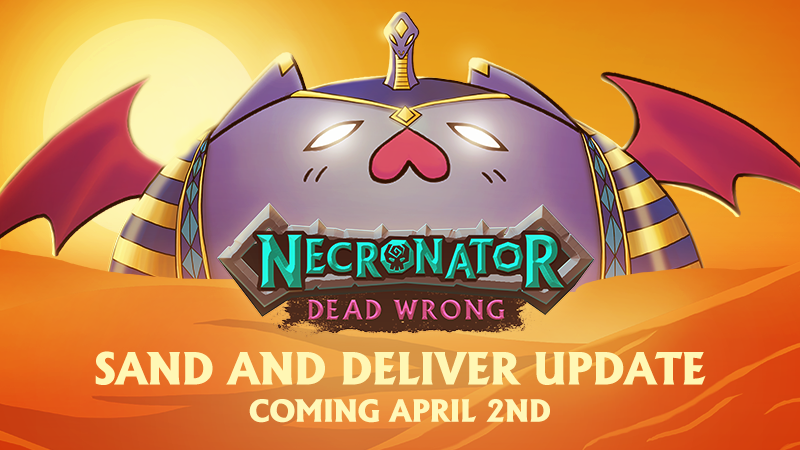 The headline feature in Sand and Deliver is the new desert sector, Al'Noobi, two which you'll travel after defeating Lord Balderdash at the end of sector 1. In Al'Noobi you'll find a new boss, loads of new enemies, and game-changing spells and relics. 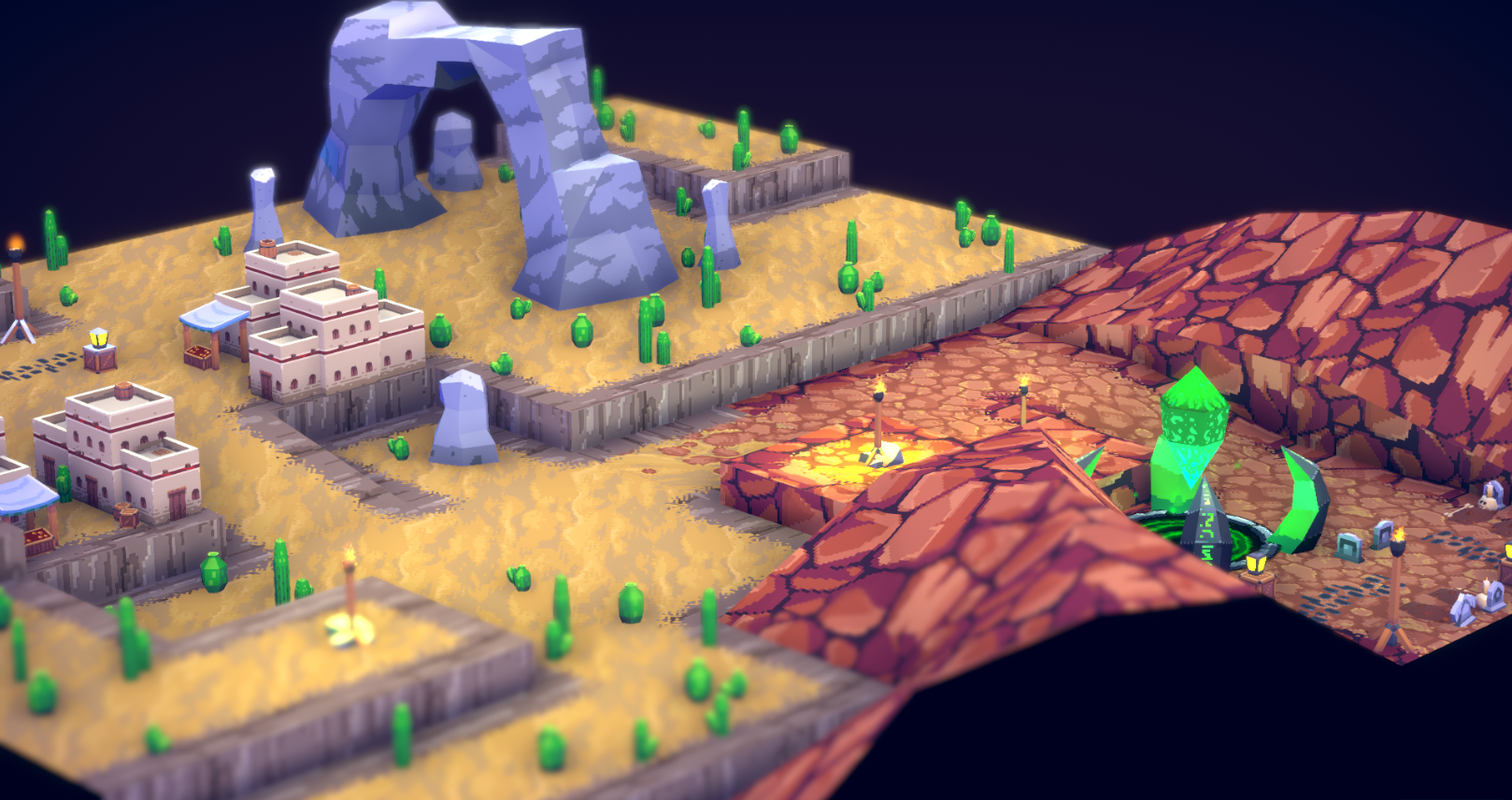 Al'Noobi's hot but it's a dry heat.

Sand and Deliver is just two weeks away! Keep your feedback and reviews coming, and follow Modern Wolf and Toge Productions on Twitter for all the latest.
Share:

Everybody here at Modern Wolf and Toge Productions hope that you're staying safe and doing your part during the epidemic. Come hang out on the Toge Productions Discord if you're looking for company!

Here's the notes on what's in today's update:

#Discussions_QuoteBlock_Author
Early Access v0.3.35 Mar 18, 2020
- Removed some new relics that weren't intended to be included in the game yet, oops!

Developers' Note: We are working on some new relics, almost all of them aren't properly balanced and/or tested yet, but somehow they've managed to snuck their way through into yesterday's update. So, for balance and technical reasons, we are removing them from the game so they can make their grand entrance properly :)

Warning: Your save data might be corrupted if you have these relics in your on-going game save data, you might have to start a new game to fix this issue.

If you wish to continue your on-going game, you can go to the ‘secondary’ branch on steam to play version 0.3.34, which will still have the relics.

Early Access v0.3.34
- Enemy Buildings HP and Attack now scale according to how far the player is into each run:
- Approximately every 3-4 battles the enemy will receive a Level of Relic which increases their Building HP and Attack by 25%
- Enemy Building Base HP and Attack are reduced to compensate this for early game
- Player can now Scout the enemy before entering a Battle
- Scouting reveals the Battle's Objective, Enemy Squads, and Enemy Relics
- Don't mind the Mini-Bear sprite for now
- Increased the down time between enemy Reinforcement, starting after the first
- Decreased the HP and Attack of Enemy AOE Ranged Unit
- They're practically glass cannons now :)
- Fixed Finger of Death not able to be upgraded (Thanks to SteelSoul!)
- Fixed Rain of Arrows can be upgraded into unupgraded Rain of Arrows (Thanks to Foxy Hydra!)
- Players can't escape getting Injured in Events now
- Improved the Campfire UI
- Improved the Upgrade UI
- Changed Injury: Cost 50, Exhaust (Removed While in Hand effect)
- Added Event Text to Campfire actions
- Fixed the cost of Zap

As always, thank you for playing and for your feedback! It's super important to us.

Meanwhile, we're plugging away on the next major content update following on from last week's INFINITY UPDATE. Expect more details about that next week!

Here's the notes for update that went live today! 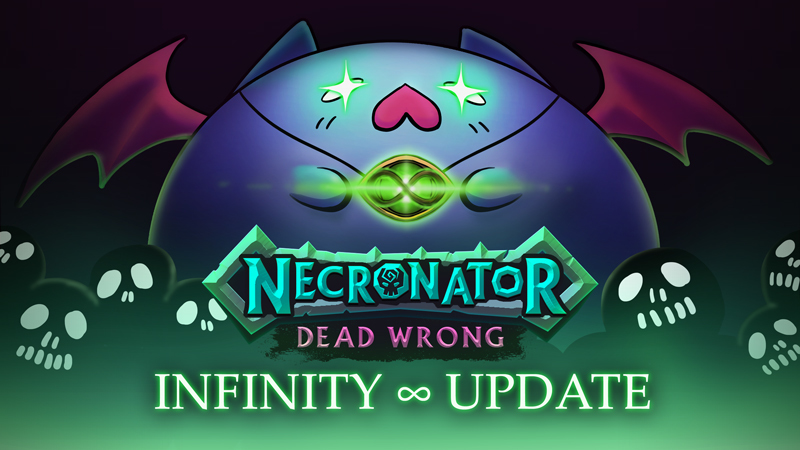 Like a horde of Demon Fiends rushing out of the infernal portal, here comes the INFINITY UPDATE for Necronator: Dead Wrong!

Back when we launched Necronator: Dead Wrong a few weeks ago, we promised you big content drops every month, and this is the first of those!

The INFINITY UPDATE is packed with new features, like the Eternal Quest mode that lets you take a victorious deck back for another run at a buffed Lord Balderdash. We've revamped the enemy reinforcement system to give you a fairer fight when battles run into overtime. There's a whole new enemy relic system to increase variety in your battles. All this plus new cards, new status effects, new maps, and TONS of UI improvements and balance tweaks.

The full update notes are below:

As you can see, your feedback is hugely important to us; we implement more of it with every update. So please keep your comments and feedback coming on the Steam forums and in Toge's Discord.

There are more updates coming, so be sure to follow Modern Wolf and Toge Productions on Twitter for all the latest.

Thanks for visiting us at PAX East!
Necronator: Dead Wrong - case 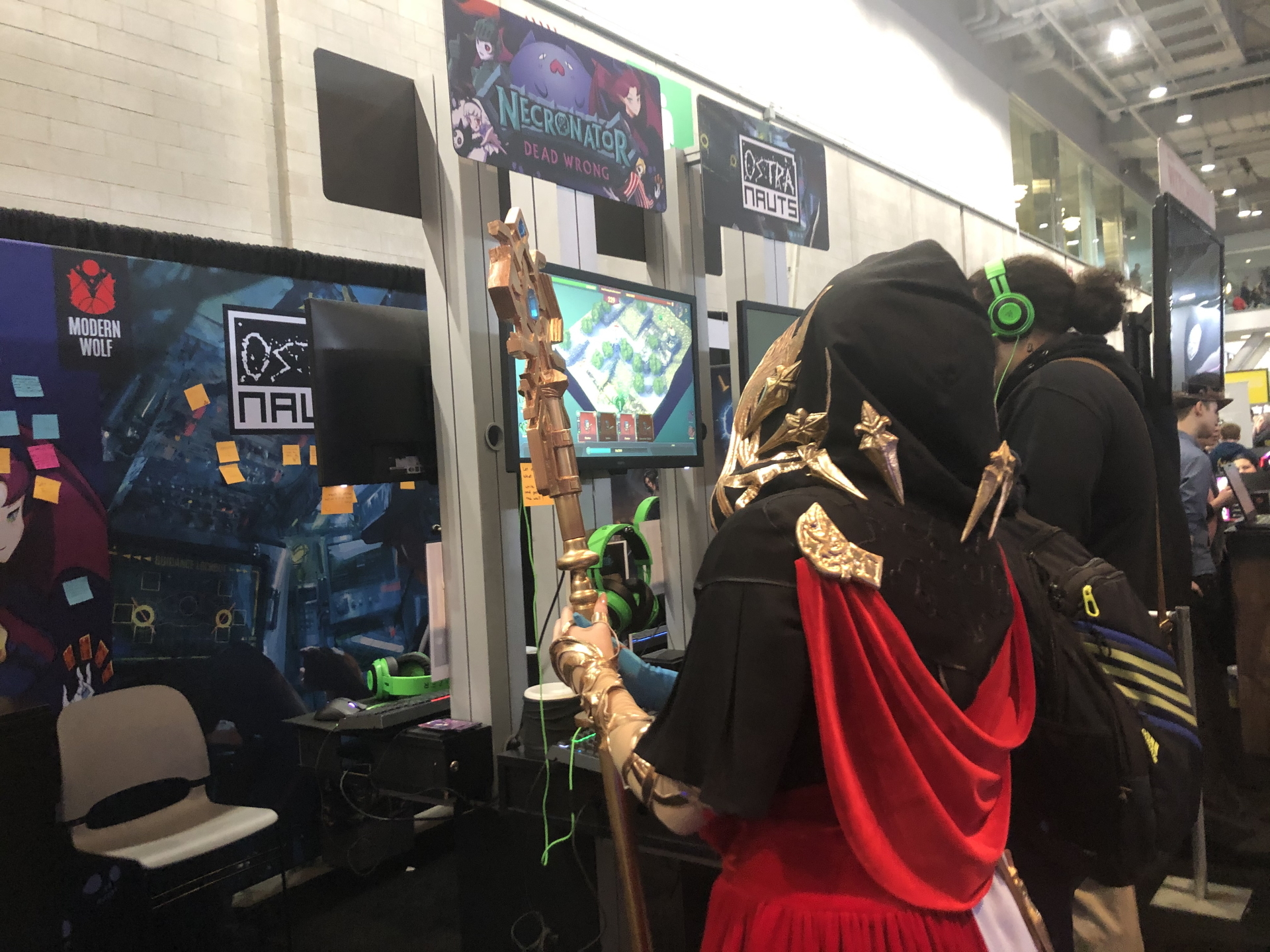 This dark lord gets it.

Hello folks, we're back from PAX East where Necronator: Dead Wrong was playable on the Modern Wolf stand along with Kosmokrats and Ostranauts. 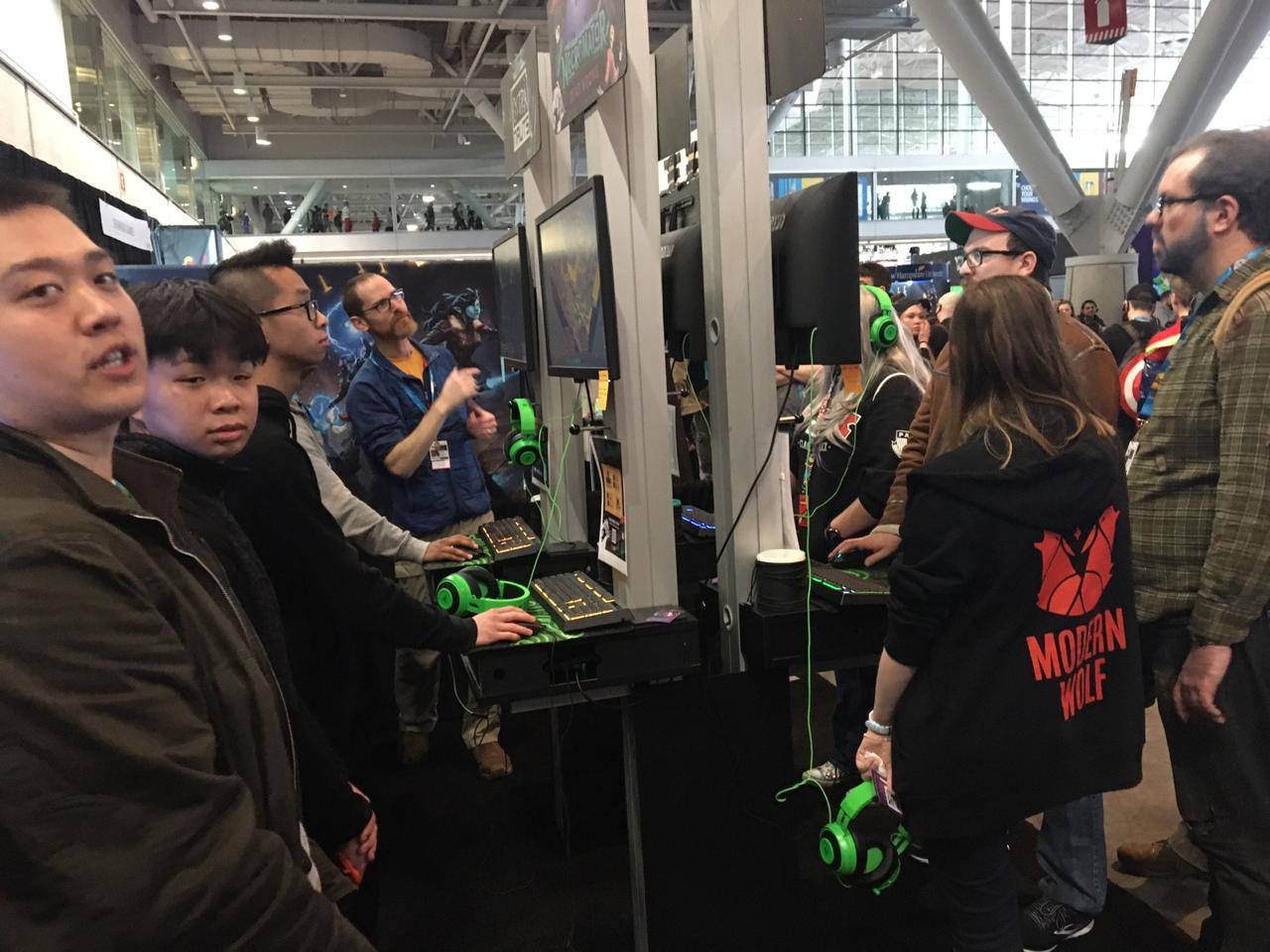 Thanks a million to all the folks who came out to play it! If you missed us, fear not: Necronator will be at other shows around the world this year. We'll give you a heads up on the Modern Wolf Twitter and right here on Steam, too.

While some of our team was manning the floor at PAX, the rest of the Necronator: Dead Wrong crew was working to get the INFINITY UPDATE ready to drop tomorrow. Check back here for more news in the morning UK time. 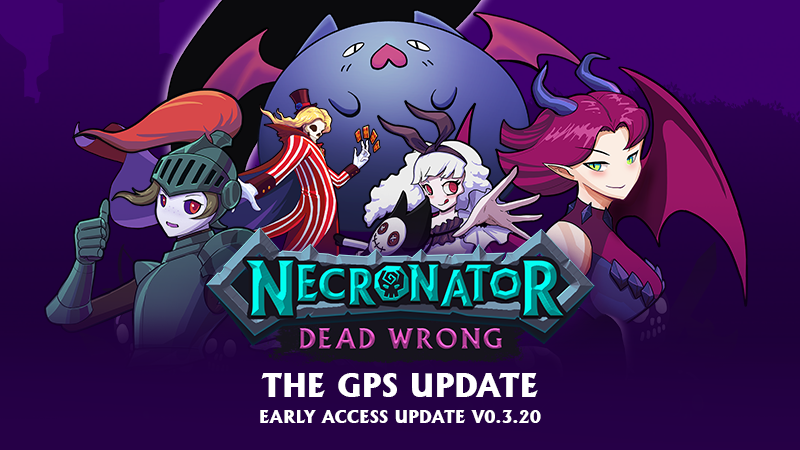 But we can't keep you waiting all the way until March 5th for an update, so here's just a little one to keep you going until next week: v0.3.20, The GPS Update!

This update tweaks pathfinding and maps, which will hopefully mean that units won't get stuck on terrain or turned around anymore. ("Hey Siri, give me directions to destroy this village.") Please let us know what you experience after this update; we'll keep tweaking it if need be.

Join the Toge Productions Discord to give us more feedback, or keep posting right here on the Steam forums: we're definitely listening.

Don't forget to come visit us at PAX East if you're in Boston, and get ready for the INFINITY UPDATE next week! 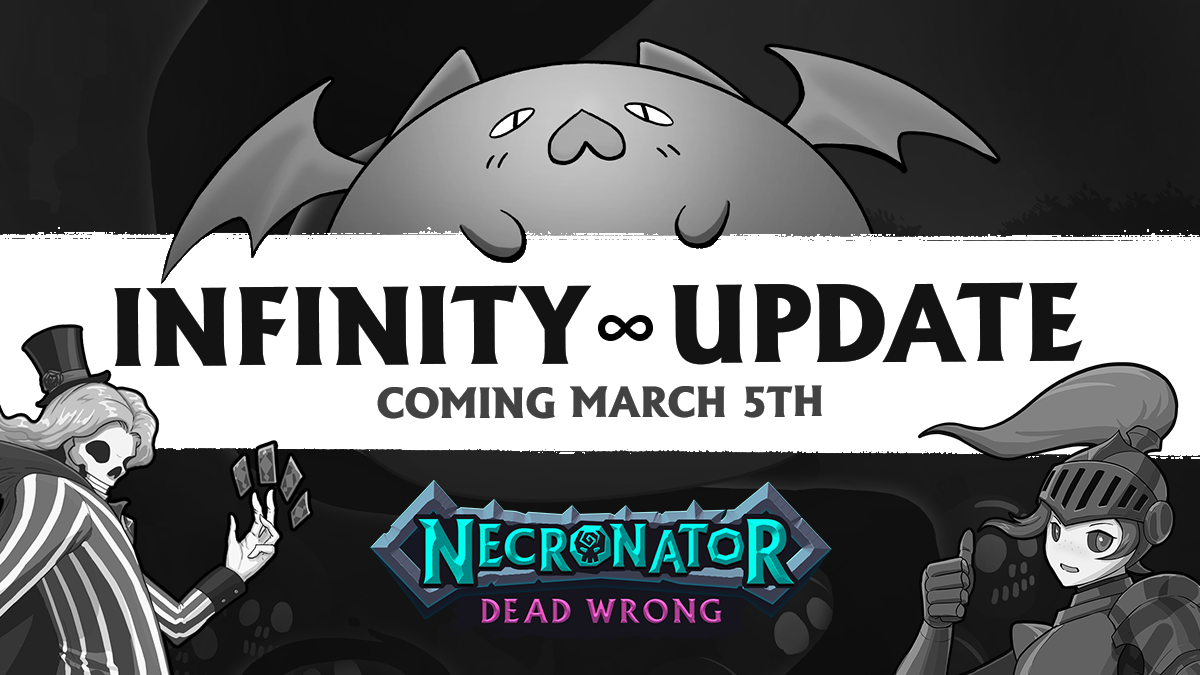 Hey Necromancers! The Chubat says hi, by the way.

We've been taking your feedback on board and putting it into action: we've made 4 updates to Necronator: Dead Wrong in the week it's been available. We've tweaked balance, added enemies and cards, and more. But that has been relatively small potatoes next to what's coming! Now it's time to get ready for the first major update we promised in our Early Access roadmap.

The Infinity Update will add:
PLUS!

All that and more in the FREE Infinity Update!

We're gearing up to wow you with the Infinity Update on March 5th, but that doesn't mean that there won't be smaller updates between now and then: expect a smaller update early next week with a new post-run reward screen, some balance tweaks, and a couple of new cards!

If you're going to be at PAX East, come on down to the Modern Wolf booth! You can play Necronator: Dead Wrong there, but also the newly-announced Kosmokrats and the soon-to-be-released Ostranauts! 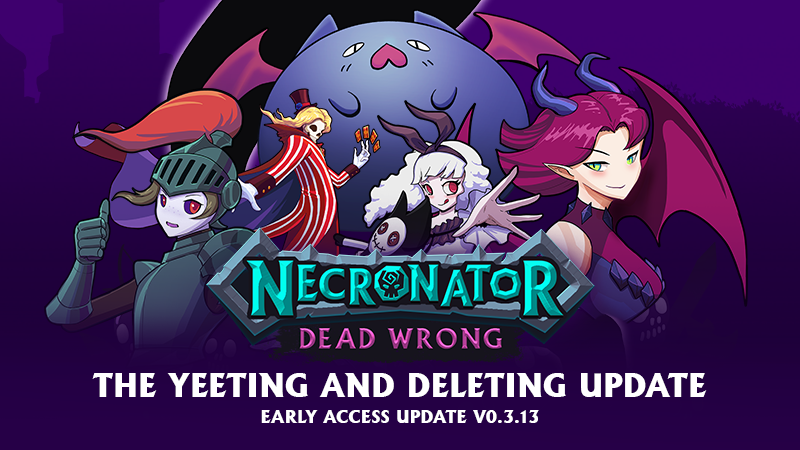 Hey folks, we've got a chunky update for you today: the YEETING AND DELETING update adds four new enemies with AOE attacks like these smug little elf mages over here.

Even more importantly, you can now delete cards from your deck at rest sites, allowing you to achieve the sleek, streamlined build of your dreams! 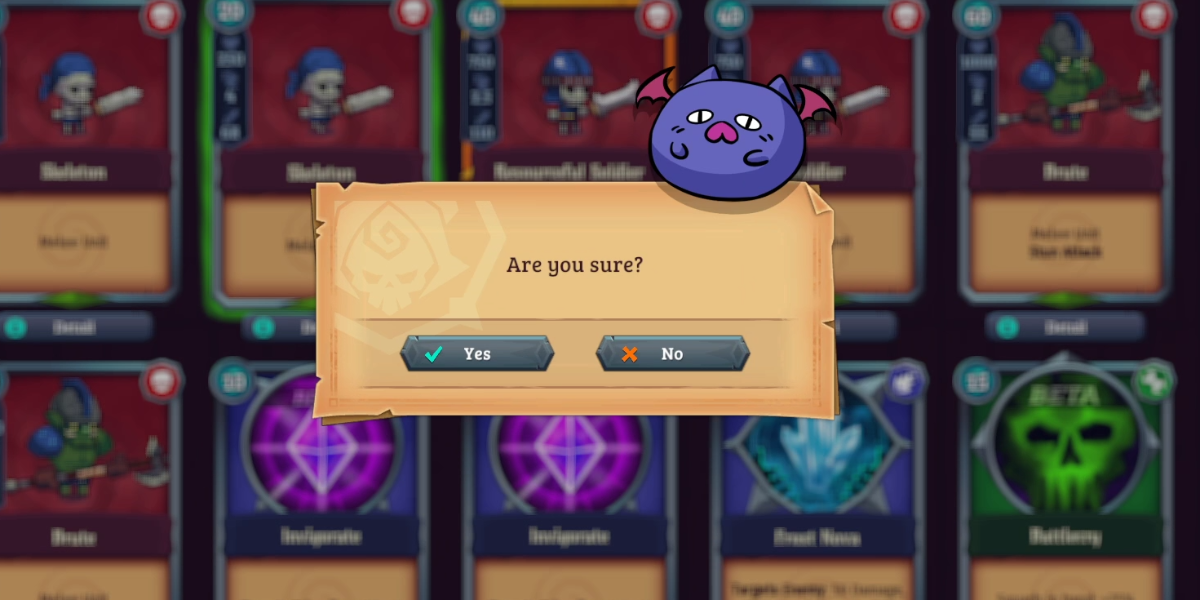 As always, thanks for your feedback and suggestions: we're definitely listening. Stay tuned because later this week we'll be announcing a major content update coming later this month.