END_OF_DOCUMENT_TOKEN_TO_BE_REPLACED

The arrival of Nvidia's RTX line of graphics cards may not have immediately ushered in a new era of games built around the concept of ray traced rendering but it has put the technique on the map, with results impressive enough to inspire developers to add ray traced effects to existing games - several of which do not actually require Nvidia hardware acceleration. We recently looked at a stunning path traced version of Minecraft, but what if RT techniques could be applied to all DirectX9 and DirectX11 games? And what happens if we apply that new technology to classic PC mangler, Crysis? Watch the video embedded on this page and you'll see that it works to a transformative degree - albeit with limitations.

It's all because of a new extension currently in development for the powerful post-process injection tool, Reshade, created by modding veteran and Nvidia Ancel contributor, Pascal Gilcher. Reshade works by hooking into DirectX, accessing the data contained in the depth and colour buffers to accomplish a range of post-process effects, including SMAA anti-aliasing, screen-space reflections, depth of field and colour tints to name but a few. A new ray tracing feature is now available in alpha builds - and strictly speaking, this adds a new layer of global illumination derived from path tracing. It's not a full fat implementation as we saw in Minecraft, but it can have a transformative effect - particularly on titles like the original Crysis, created at a time when the way games were lit was somewhat na ve compared to modern day implementations.

Crysis was a pioneer for screen-space ambient occlusion (SSAO) which uses data from the depth buffer to add shade to the nooks and crannies on-screen. The technique has evolved constantly over the last decade, but path traced global illumination can take this to the next level: Reshade beams out three rays per pixel in calculating shade and light bounce - giving a new layer of accuracy and depth to the way the scene is lit. Take a look at the video below and you'll see a number of A to B comparisons that reveal a stark difference. 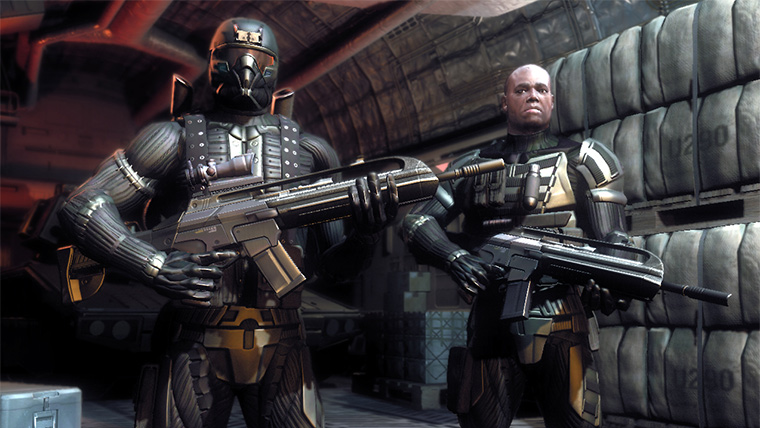 “Will it run Crysis?” was an oft-expressed anxiety of mid-noughties PC gaming, but here in the chaotic end-times of 2018 we’re faced with a new one: “Crysis can’t run Crysis.”

Come October, there’ll be no more multiplayer nanosuit shenanigans: Crytek are shutting the online component of Crysis down, apparently because the playerbase is just too dang small to make life support worthwhile. Singleplayer isn’t going anywhere, you’ll be glad to hear, but still: it’s sad when something dies. END_OF_DOCUMENT_TOKEN_TO_BE_REPLACED

The Star Citizen makers are being sued by Crytek
Eurogamer

The makers of Star Citizen - Cloud Imperium Games and Roberts Space Industries - are being sued by Crytek over misuse of CryEngine.

Cloud Imperium Games has dismissed - in a statement on Polygon - the claims as "meritless" and said it will "defend vigorously" against them, but they may prove hard to wash away.

It boils down to what was agreed upon in a General Licensing Agreement between the two parties in 2012, back before nearly 2 million people pledged a combined $174m towards development of the game. Crytek’s beautiful and involving Oculus Rift game The Climb [official site] is a pretty good riposte to all of the above. … [visit site to read more]

These are words that make me hot.

But I know this feeling is forbidden. I should care about games>, not the empty pursuit of photorealism. But oh my, it s so exciting, and not empty. In fact, I think that right now photorealism is becoming crucial to games, and that we should celebrate it.

Have You Played? is an endless stream of game recommendations. One a day, every day of the year, perhaps for all time.>

When later entries in a series go wrong, the disappointment tends not to blight the original people liked so much. Unfortunately Crysis [official site] couldn’t maintain the things people liked about it for even its own running time. Yeah, the aliens were a bit guff, but there was so much in Crysis to like from its open stealth-action beginnings to its bombastic finale.

We’re off the back of a string of five reviews, so it’s time for a NEWS UPDATE. Let’s call this the NEWS UPDATE OF MAY, or the MAY NEWS UPDATE. Of board games, obviously. And you might be thinking – Well, Rab, you just did a news update last month, called the April News Update or something. Is there even more news about daft board games already? And I’m all like that – Well, yes.

The 50 Best FPS Ever Made
Half-Life - contact@rockpapershotgun.com (Alec Meer) Gathering together the best shooters is no easy task, but if you’re looking for a new PC FPS to play, look no further.

Your favourite game is at number 51.

There’s an open stretch of grass between me and the thin exterior wall of a small island village. The place is crawling with enemy troops, who move along the dirt roads and populate the ramshackle buildings in groups of two or three. Defensive turrets would already be firing at me if I my nanosuit wasn’t keeping me invisible, the energy bar barely moving for as long as I remain still.

You want Advanced Warfare? Crysis did that seven years ago.