Antegods - Stonepunk arena shooter
Developer
Codeglue
Publisher
Codeglue
Antegods is an action-packed arena game in which the remnants of the Mayan civilization have taken to space. Two teams of 4 players each control customizable stonepunk mechs to hunt for energy and fight off opponents in a procedurally generated and highly destructible map.
All Reviews:
No user reviews
Release Date:
Developer:
Codeglue
Publisher:
Codeglue
Tags
Popular user-defined tags for this product:
Action Indie Strategy
+
Reviews
All Reviews:
No user reviews 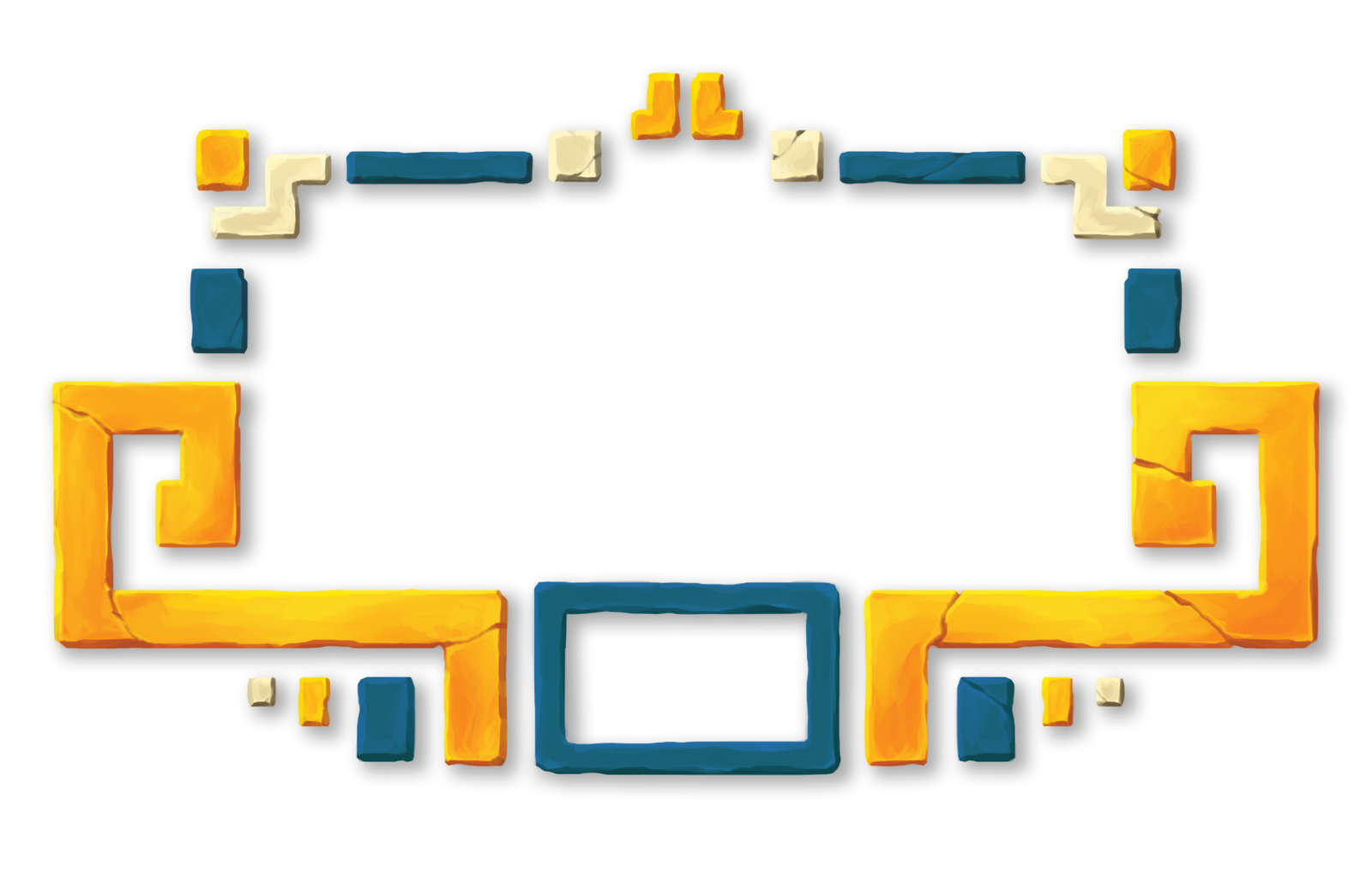 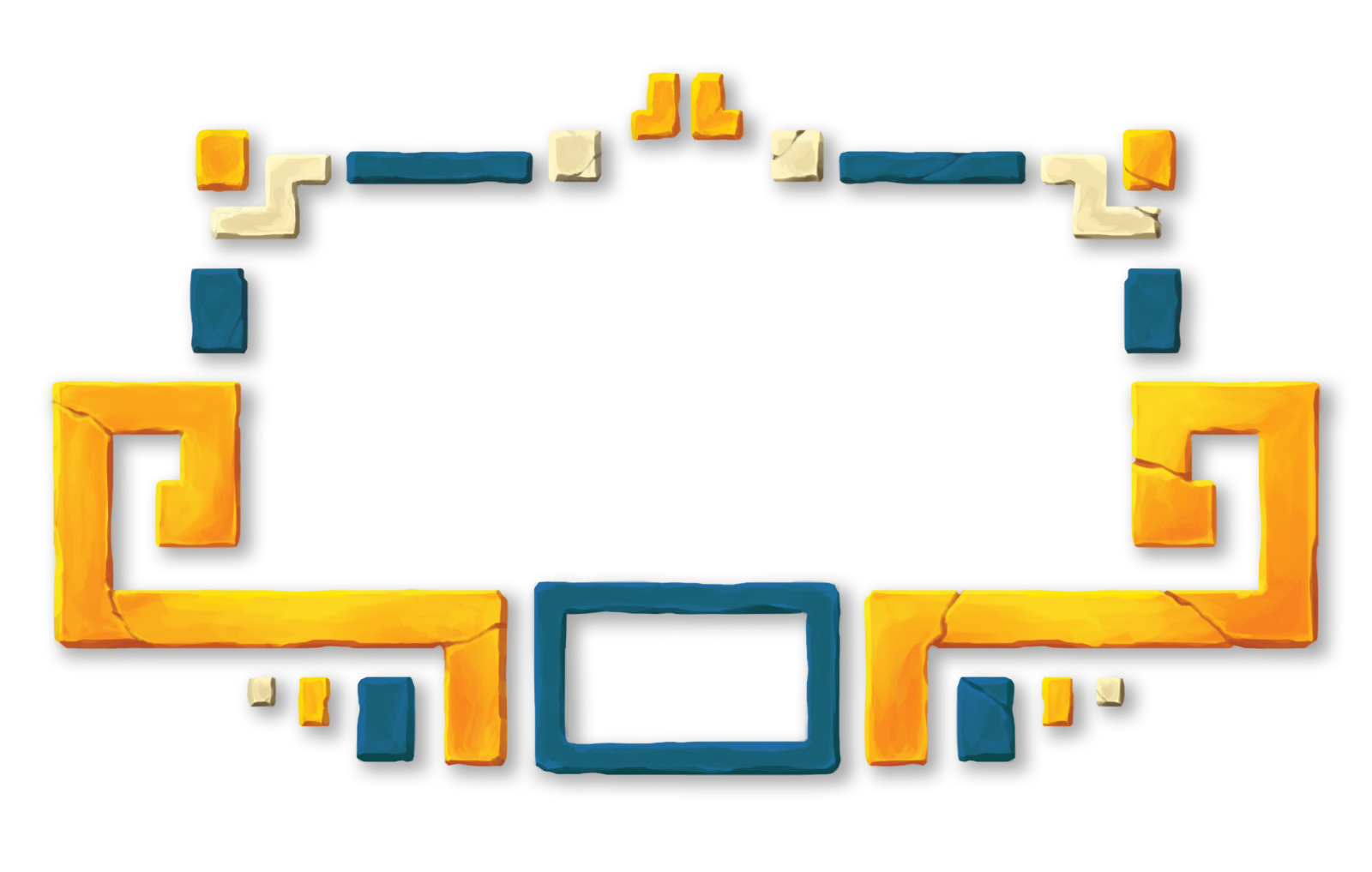 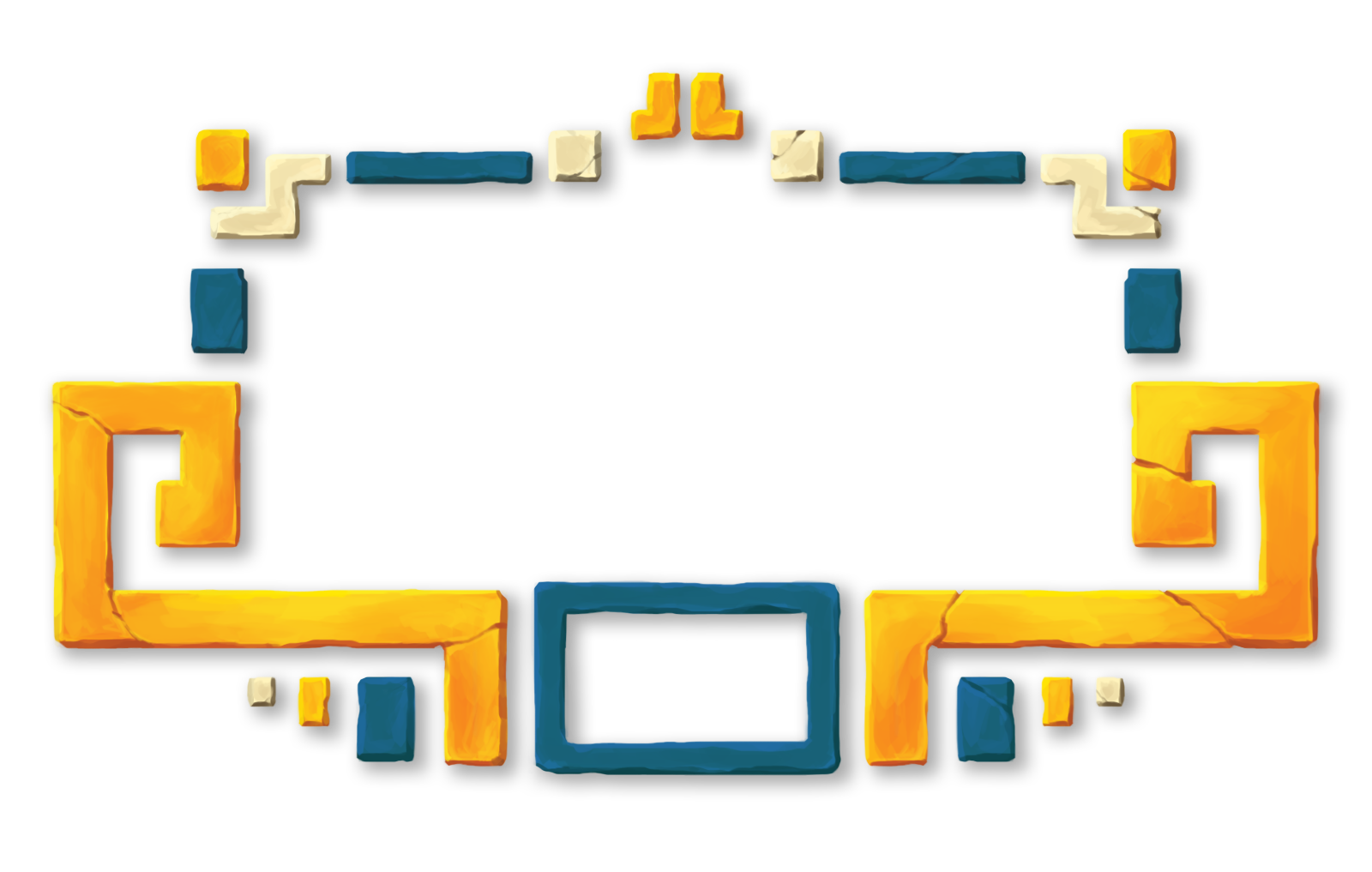 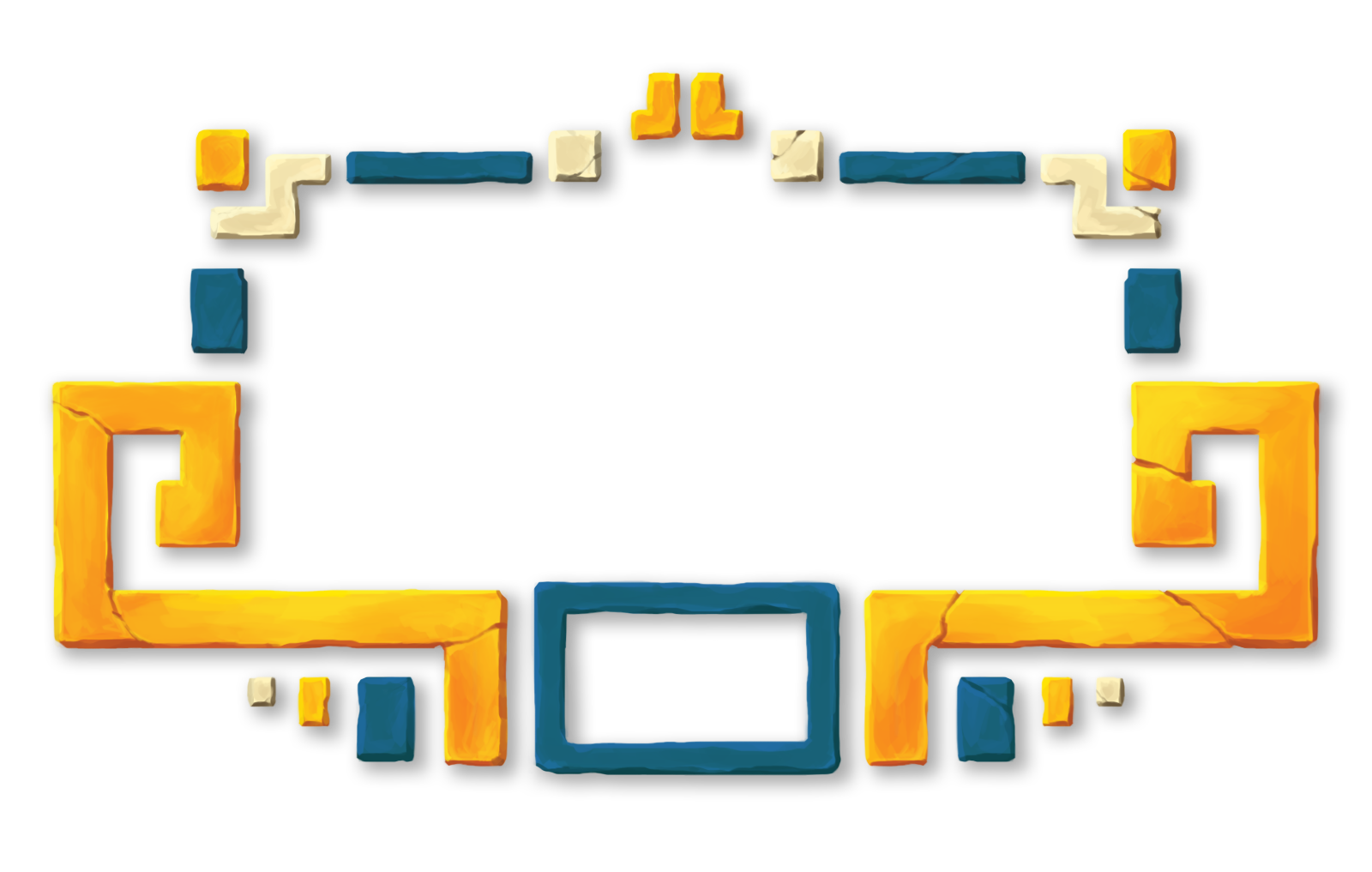 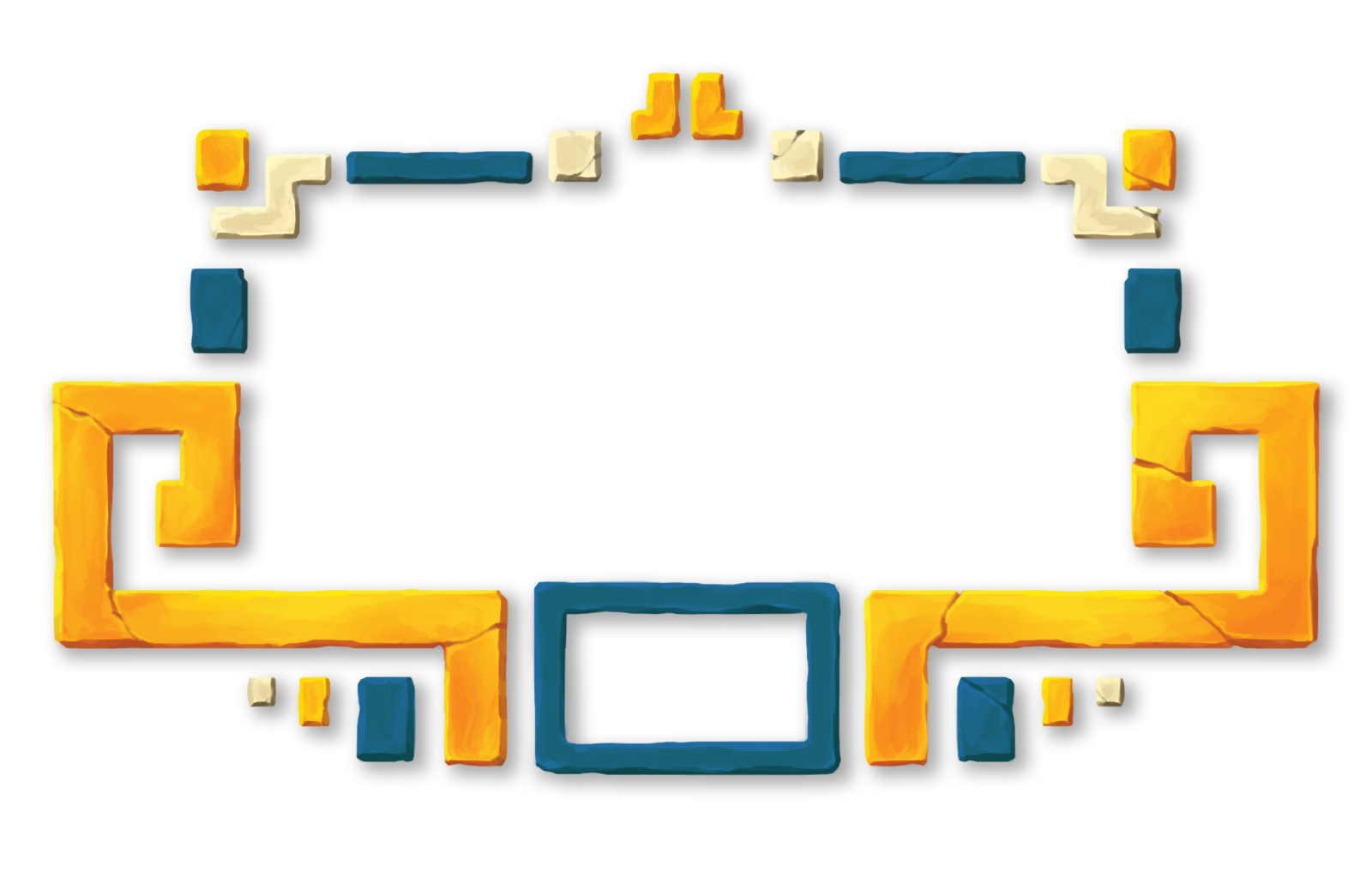 “Anyone who has played MOBA's like Awesomenauts will be right at home in Antegods and should appreciate its twists and gameplay changes.”
Gamewatcher

“The design is quite unique and colorful and the multiple choices for mechs and weapons hints that this game is set for the long-term.”
Dualshockers

Antegods is an action-packed arena game in which the remnants of the Mayan civilization have taken to space. Two teams of 4 players each control customizable stonepunk mechs to hunt for energy and fight off opponents in a procedurally generated and highly destructible map. The ultimate goal is to activate enormous ‘titan’ statues that will bring explosive mayhem down upon the enemy team. Whoever wins these tactical battles climbs an intergalactic tournament ladder, ultimately becoming gods themselves. 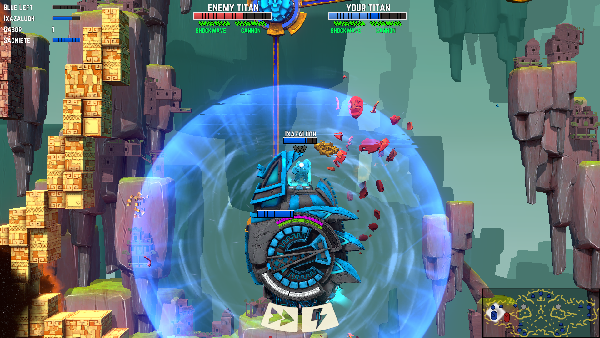 Pair Up For Titanic Destruction

Each team commands a gigantic flying battle fortress: the titan. It can be controlled by up to two players. The pilot moves the titan, smashing through any walls that are in the way, and unleashes a devastating shockwave.

Meanwhile the gunner fires the titanic cannon to rain down destruction from a distance. Your opponents are in for a rough time, unless their titan has also awoken…

Maneuver your jetwing-equipped mech through procedurally generated and totally destructible maps. Dash away from your opponent’s shots, and fire your lethal weapons. Use your mech’s unique ability, such as the Wolf regaining shields after taking down an opponent! The controls are direct and simple, but the combat always keeps you on your toes.

Besides fighting, you explore the map to collect silk energy. Keep an eye out for energy-holding plants and spindle temples that periodically generate energy. Be careful though, you drop all collected energy when you’re shot to pieces!

Energy is used to power stonepunk machines in the world of Antegods, such as activating a network of powerful turrets for your team. Outwit your opponents by strategically taking control of important areas of the map.

Energy can also be delivered to a central point to unlock your titan’s massive shockwave and destructive titan cannon. Energize your Titan quick to gain a powerful advantage over your opponents. 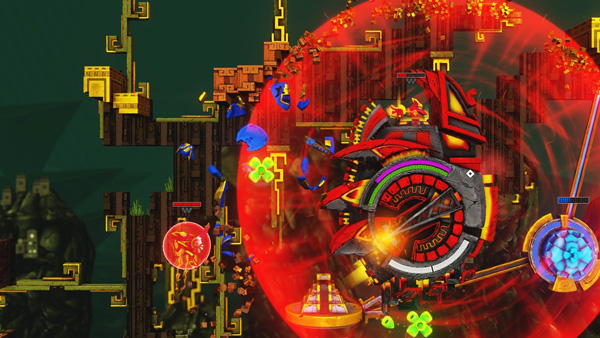 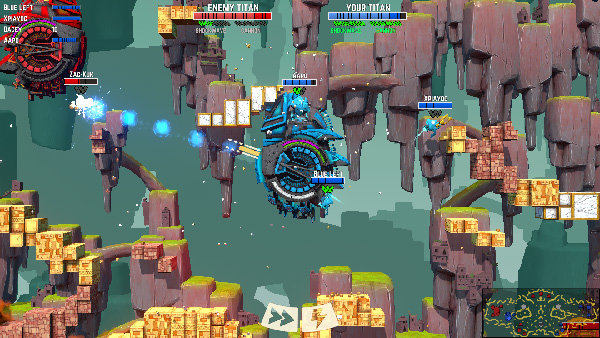 Each battle takes place in a procedurally generated map built out of destructible terrain. Think on your feet to find the best strategy for each level and use the constantly changing landscape to your advantage.