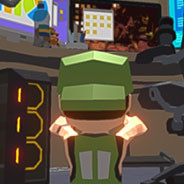 “We wanted to get the game into the hands of players midway through development in order to make sure we make the best game possible.”

“The current plan is to release the game in 2021 however this may change depending on features added and how the game will progress through early access.”

“We plan to add a lot more content to the game. This includes more control, maps,and any other content we get suggested from community feedback.”

“The current build provides players with 6 maps and 10 characters”

“The community will be involved in every step of development and can provide us feedback and suggestions in the Steam Discussions as well as our Discord server. Private betas for development builds will be offered to those who offer us regular feedback and can directly influence the future of the game.”
Read more
Check out the entire NeedFreeMove franchise on Steam

This is an easy and funny sand sculpture game.
Each level will provide a new environment for players to explore.
Of course, the dreamer's soft body and rocking movements don't make things easy. Whether it's jumping, climbing, loading or rocking, it's easy to get worse - very funny results.
If the soft little man grabs the rope, his hand slips, his judgment of space is wrong, he jumps wrong, or he is even pushed down from the edge of the cliff by his close teammates Don't be afraid: he will just fall back into the dream and be ready to try again and again.