Retro Tanks is an intense, fast-paced tank shooter game. It is fun, easy to learn and addicting. Play alone, together with friends or against your friends and show your navigation and reaction skills in 6 different game modes and countless pixelized levels.
All Reviews:
Positive (18) - 100% of the 18 user reviews for this game are positive.
Release Date:
Developer:
EpiXR Games
Publisher:
EpiXR Games
Popular user-defined tags for this product:
Action Casual Indie Simulation Retro Tanks Arcade Co-op Local Multiplayer Classic
+ 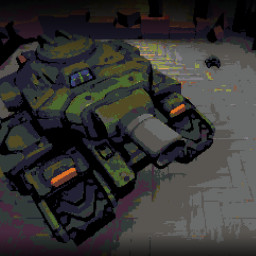 Deafest the enemy tanks while dodging their deadly bullets.
Improve your aim and maneuver skill while war itself is trying to end your adventure.
Stage by stage the enemy's tanks get faster, smarter and deadlier.
Can you make it to the end and defeat their leader?

Beat the stage mode with 10 stages filled with enemies and secrets.

- The Normal Mode = Nothing much to say here.
- The Hard Mode = Your enemies get stronger while your tank sucks hard.
- The Bomb Mode = Can you beat the game using bombs only?
- The Invisible Mode = Your enemies are invisible… No worries you can still see their tire tracks.
- The Speed Mode = Everything happens twice as fast.
- The Perspective Mode = Bring the game into a whole new perspective.

- Play the single-player campaign to practice your skills and beat the game by yourself.
- Finish the campaign with 2 players in the co-op mode.
- Defeat your friends in the VS Mode for up to 4 players.